Skip to main content
Signs Of the Times
November 14, 2011 issue

The Quest for Peace Continues At Assisi Gathering

The Quest for Peace Continues At Assisi Gathering 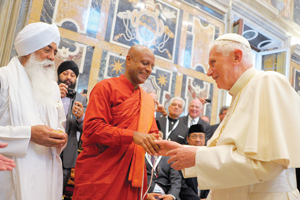 Speaking to some 300 representatives of the world’s major religions gathered in the Basilica of Santa Maria degli Angeli in Assisi, Italy, Pope Benedict XVI opened an interreligious pilgrimage for peace on Oct. 27 with an expression of shame for the complicity of faith in acts of violence and praised agnostics and other “searchers” for helping to purify faith. The event marked the 25th anniversary of the first interreligious gathering in the hometown of St. Francis, called in 1986 by Pope John Paul II.

Pope Benedict distinguished this year’s gathering at Assisi by insisting that nonbelievers be invited. This was interpreted by many as a gesture calculated to begin a dialogue with proponents of Western secularism. Indeed, in his opening address Pope Benedict visited one of secularism’s favored terrains. He said the post-Enlightenment critique of religion as a cause of violence was valid when “religion really does motivate violence” and that the “reckless brutality” of religiously motivated terrorism “should be profoundly disturbing to us as religious persons.”

Pope Benedict repeated the emphatic declaration of the first Assisi gathering that religiously inspired violence was the antithesis of religion and contributes to its destruction. But the pope went on to consider a second kind of violence, one brought about by the denial of God. As well as the horrors of “state-inspired atheism,” he said, the denial of God brought about “the decline of man and humanity.”

The worship of money and power had become a kind of “counter-religion,” in which only personal advantage mattered. Such a conception, he said, leads necessarily to force being taken for granted, as a result of which “peace is destroyed and man destroys himself in this peace vacuum.” The denial of God, he said, “corrupts man, robs him of his criteria and leads him to violence.”

Dr. Rowan Williams, archbishop of Canterbury and spiritual leader of the Anglican Communion, told the participants during his address that they must help the world see how much religions have to offer “in the struggle against the foolishness of a world still obsessed with fear and suspicion, still in love with the idea of a security based on defensive hostility and still capable of tolerating or ignoring massive loss of life among the poorest through war and disease.”

There was no interfaith prayer at the culmination of the two-hour final ceremony. Instead, the delegates observed a time of silence “during which each person will be able to invoke the gift of peace or to express an earnest desire for it from deep within”—a formula designed to include the four nonbelievers present.

The gathering may not have broken much new ground, but it could help solidify relationships built up over 25 years of a common pursuit of a spiritual humanism of peace. Archbishop Williams said, “The challenges of our time are such that no one religious body can claim to have all the practical resources needed to confront them, even if we believe we have all we need in the spiritual or doctrinal realm.” And a Mexican humanist, Guillermo Hur-tado, pledged to “make every effort to ensure that believers and non-believers in reciprocal trust can live out the shared quest for truth, justice and peace.”

In his final remarks, Pope Benedict said, “Today’s event is an image of how the spiritual dimension is a key element in the building of peace.” The Catholic Church, he concluded, “will not let up in her fight against violence, in her commitment for peace in the world."

This article also appeared in print, under the headline “The Quest for Peace Continues At Assisi Gathering,” in the November 14, 2011, issue.