Into the Desert: Il Poverello in portraiture 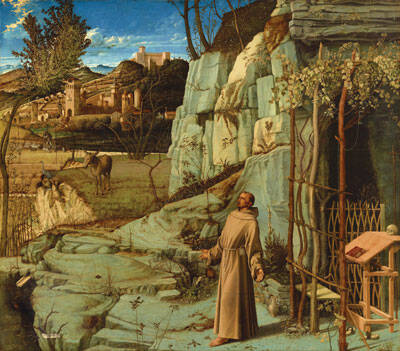 Have you ever seen St. Francis of Assisi smile? Neither have I. And that’s unfortunate, because according to his biographers, il Poverello (the little poor one) was one of the most joyous of men. He was the merry leader of a band of brethren who called themselves “God’s jugglers,” as they worked and played and sweated and laughed with people in the fields and towns, before ever preaching to them. This sunny disposition also showed itself in the ways Francis located God in some startlingly new places, at least according to the 13th-century worldview. He saw God not just in men and women trying to be faithful but in lepers and outcasts, ravenous wolves, fish and birds, the sun and the moon, even in bodily pain and death. Francis is a man who rolled in the snow, stripped himself naked to demonstrate to his father how joyfully he had renounced owning things and preached in his underwear to show humility. Still, we never see him smile. What a shame that is.

Blame it on the iconographers—the artists and painters who have rendered the image of St. Francis since his death in 1226. There are thousands of paintings of St. Francis. The world’s most popular saint is also, after Jesus, the most painted figure in history. So it seems that at least occasionally we should see him smile. Instead we see him caught in the serious actions of his life story as told by biographers.

In the history of art there is a “top three” of the most important paintings of the Poverello. First would have to be the fresco on the wall of the chapel of St. Gregory in the Sacro Speco (sacred grotto) in Subiaco, a city in the province of Rome. The Subiaco grotto was made famous centuries earlier by St. Benedict of Nursia, who retreated there and founded the Benedictine order within its walls. The fresco portraying Francis hangs to the right of the entrance to the cave and is inscribed as painted during the second year of the pontificate of Pope Gregory IX (late 1228 or early 1229). This makes it the earliest surviving painting we have of the saint. Many scholars assume that the man depicted in that fresco is as close a likeness as we will ever have of the real Francis. He is wearing the rough habit of his order, with a knotted cord about his waist; his hands are pre-stigmata; and he is barefoot.

Second in importance may be Cimabue’s famous portrait, which hangs in the right transept of the Lower Basilica of San Francesco in Assisi. There Francis appears shorter and swarthier than in the portrait at Sacro Speco. He is showing his stigmatized hands to the painter with downcast, humble eyes. Some biographers prefer this image as the most faithful of the early ones precisely because it seems to show a less idealized man. This feels like the Francis we know from the stories in The Mirror of Perfection and The Little Flowers.

The third painting is the most frequently reproduced image of St. Francis: Giotto’s fresco, also from San Francesco in Assisi, depicting “The Preaching to the Birds.” This is the 15th scene in the narrative cycle located around the nave of the Upper Basilica. You have probably seen it in books and films or on postcards, coffee mugs, holy medals and in your hotel and tour brochure if you have visited any town in Umbria. Each image from the fresco cycles at San Francesco—and in similar cycles at other Franciscan basilicas throughout Italy—depicts scenes from the biographies of Francis. Like any good storytelling of a saint’s life, they show Francis on his way of conversion toward heaven.

But other images, which hang in museums around the world, also deserve our attention. Francisco de Zurbarán’s “Saint Francis in Meditation” hangs in The National Gallery in London, for example. The 17th-century painter, a Spanish Catholic, shows a kneeling friar in closet-like solitude, cowled, his mouth open to speak to God, holding a skull in contemplation of death. This is a dark, stark, arresting image, far removed from the juggling, joyous side of Francis. Zurburán’s countryman, El Greco, painted similar scenes.

“Saint Francis in the Desert,” by Giovanni Bellini, was recently restored and is on exhibition at the Frick Collection in New York City. Bellini’s painting dates from the most exciting days of the European Renaissance, around 1475, when the artist was at the height of his powers in Venice. He took as his subject the patron saint of Italy, but added a variety of details, mysteries and symbolic touches that have kept experts guessing for centuries.

The work was painted in oils on three wooden panels joined together. Bellini placed St. Francis in the foreground surrounded by mountains and desert, a common combination in central Italy. Depictions of Italian saints venturing into the mountains have long been used to replicate the experience of Jesus going into the desert. The two locales are united in the Italian worldview. In this picture, St. Francis is alone, in deep contemplation of God, gazing gently heavenward, his arms at his sides, palms slightly raised. In the background is a walled city, a pasture with a donkey, farmland and perhaps orchards—a place rugged and alone but also cultivated and civilized.

One’s eye can wander in the background for a long while. Who knows how a master painter decides what to place in those parts of a picture? It is a created scene, to be sure, not any particular Italian landscape. Are the details simply what the artist fancied, or do they hold some deeper symbolism that he read into the saint’s story he aimed to tell?

And what is that story, exactly?

The central action of “St. Francis in the Desert” takes place, albeit mysteriously, with St. Francis in the foreground. The natural world surrounds him there, too: a red bird, various indigenous plants, an elegant heron and a rabbit that appears below the saint’s outstretched right arm. I can’t help but think that Francis may have purchased such a rabbit from a meat vendor in town only to carry it with him to the countryside, where he could set it free.

There, standing dramatically before you, is St. Francis. Unlike Cimabue’s fresco of the swarthy little man, this Francis is the charismatic founder of the world’s largest family of religious orders. Contrary to what we know as fact since his body was discovered several meters below the high altar at San Francesco in 1818, this Francis appears almost tall and lanky. He strikes a grand figure. We know that Francis had theatrical flair, but it is hard to imagine that he would display such a quality as he stood alone before God. This is the sincere movement of a man consumed by God in a single moment.

But what is that moment? Bellini tells us with tiny, almost indecipherable spots of red paint. You can still see them on Francis’s hands, and conservators who have recently examined the painting under a microscope tell us that there was once a spot of red on the saint’s foot, as well. As for the traditional piercing of the side, it is nowhere to be found. One would not imagine that this man is experiencing any discomfort at all from the five wounds associated with Christ’s crucifixion—and that seems odd to me. Nevertheless, Bellini presents us with the moment in time when the wounds of Christ were being reproduced in the body of St. Francis: the world’s first stigmata.

The greatest mystery in Bellini’s painting is the presence of God. This Renaissance artist created a somewhat modern rendition of the stigmata scene, in contrast to Giotto’s traditional representation of Christ in the form of a seraph imparting the sacred wounds to the holy man. Instead, Bellini has St. Francis looking out of the frame to find the divine. God is depicted nonrepresentationally. Only a soft light enters in and permeates the entire scene. This divine light seems to illumine Francis and make him, quietly, like Christ.

Jon M. Sweeney is the editor of The Road to Assisi: The Essential Biography of St. Francis, as well as a new edition of The Little Flowers of Saint Francis (both published by Paraclete Press).

I am sure that I will get no response to this question because nobody comments on these articles that are not in "all things" but is it true that St Francis is the most painted person on history after Jesus?Surely the Blessed Mother is more painted than Francis and perhaps even more than her son.Either way those for me are the three greatest expressions of humanity.