The Jesuit Who 'Invented' Hypertext 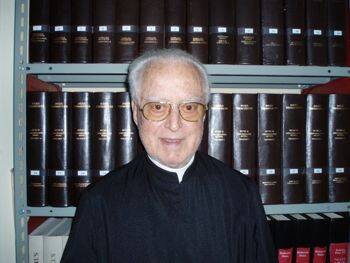 His name may not be familiar to most people, but it was probably thanks to Jesuit Father Roberto Busa that today’s computers don’t just crunch numbers, but amass, sort and link words, allowing written works online to be easily searched and analyzed. Father Busa died late Aug. 9 at the age of 97; during his lifetime he took full advantage of how data-processing went from simple punch-cards to magnetic tapes and beyond. As a young Jesuit linguist, Father Busa wanted to find a way machines could take over the monumental task of generating a concordance—a kind of systematic index of every word used in a work. His dissertation in 1946 involved making a handwritten concordance of just one word that appears in the works of St. Thomas Aquinas. It took 10,000 handwritten cards to list and analyze all the shades of meaning of just the Latin word “in” in order to study what St. Thomas meant by “presence” and “in the presence.” In the past it took hundreds of scribes and countless man-hours to create handwritten concordances of the Bible and other major works. Father Busa saw great potential in the new accounting and data-processing machines being created by IBM and Remington Rand. But instead of analyzing numbers, he believed they could help scholars analyze literary works. In a piece written in 1999 by Thomas Nelson Winter titled “Roberto Busa S.J. and the Invention of the Machine-Generated Concordance,” you can read about how the priest made a critical impact on the way computing machinery could and would be used. A great tidbit from White’s paper recalls the priest’s first meeting with the founder of IBM:

I knew, the day I was to meet Thomas J. Watson, Sr., that he had on his desk a report which said IBM machines could never do what I wanted. I had seen in the waiting room a small poster imprinted with the words: “The difficult we do right away; the impossible takes a little longer.” (IBM always loved slogans.) I took it in with me into Mr. Watson’s office. Sitting down in front of him and sensing the tremendous power of his mind, I was inspired to say: “It is not right to say ‘no’ before you have tried.” I took out the poster and showed him his own slogan. He agreed that IBM would cooperate … “provided that you do not change IBM into International Busa Machines.”