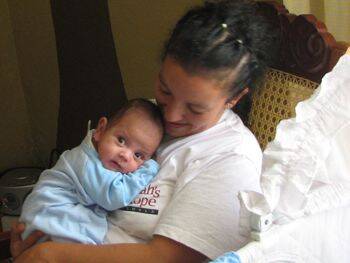 The Diocese of Rockford has announced that its Catholic Charities offices will no longer offer state-funded adoptions and foster-care services after the new Illinois Religious Freedom Protection and Civil Unions Act took effect June 1. Because the law did not include an exemption allowing religious organizations to refer adoptions or foster-care arrangements involving same-sex or unmarried cohabitating couples to other agencies, "the Diocese of Rockford is forced to permanently discontinue all state-funded adoption and foster-care operations as of June 1," said Penny Wiegert, diocesan director of communications, at a May 26 news conference.

Catholic Charities activities not funded by the state—including private adoptions, school counseling, private family and marriage counseling, outreach and emergency services, immigration and refugee services and crisis pregnancy counseling—will not be affected. Catholic Charities in Joliet and Peoria have informed state officials that because of the new law they will cease licensing new foster and adoptive parents, though they will temporarily continue services with their existing pool of foster parents and adoption clients. There has been no word from the other dioceses about whether they would similarly discontinue state-funded adoption and foster-care services. Catholic Charities in Chicago ended its foster care services in 2007 when the agency's insurer dropped its coverage.

During the debate over the Illinois Religious Freedom Protection and Civil Unions Act, the Catholic Conference of Illinois said the state's six Catholic dioceses provide about 20 percent of the adoption and foster-care services in Illinois and had facilitated the placement of about 3,700 abused and neglected children with loving families over the past 10 years.

In Rockford, 58 Catholic Charities workers have lost their position because of the termination of services. Catholic Charities in the Rockford Diocese had been handling approximately 350 foster family and adoption cases in northern Illinois with a state budget of $7.5 million.

"Our caseworkers do this work not just because it's their job but because it is their calling," said Frank Vonch, director of Catholic Charities administration in the diocese. "The families they serve are just an extension of their commitment to serve humanity, so it is a very grave loss for them as well as for everyone involved with charities."

Wiegert noted that the Catholic Church "does not condone same-sex unions or unmarried cohabitation between individuals of the opposite sex."

"We believe in the natural order of marriage and the sacrament of matrimony between one man and one woman," she added. "We also believe and promote the optimal God-given privilege of every child to be reared in a safe and loving family with a committed and loving male father and female mother whenever possible."

Vonch said that although "leaving this work will be very painful for our client families, employees, volunteers, donors and prayerful supporters, we can no longer contract with the state of Illinois whose laws would force us to participate in activity offensive to the moral teachings of the church—teachings which compel us to do this work in the first place."

Meanwhile, the state's six Catholic dioceses were working together to create a joint response to the law, said Bob Gilligan, executive director of the Catholic Conference of Illinois.

He told the Catholic New World, Chicago's archdiocesan newspaper, that a recent conference call involving five of the six yielded what appeared to be a consensus to have their employment policies ensure that people who work for them understand they are working for the church and are expected to conform to church teaching.

The state's Catholic health care facilities also were among the entities discussing how the law will affect them.

Such a package would "provide any employee the opportunity to buy into a benefits package that would provide health coverage for themselves and one other person living with them. This person could be a sibling, relative, etc., the exact relationship would not need to be disclosed," wrote Patrick Cacchione, the health association's executive director, in the memo.

The memo was only a recommendation, he emphasized, and it would apply only to health care institutions, not to dioceses, Catholic Charities agencies or educational institutions