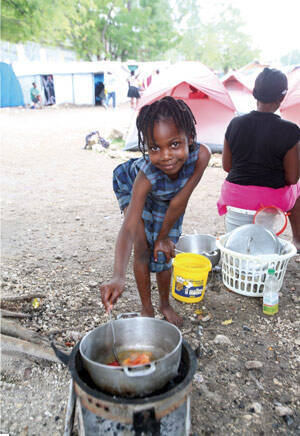 Almost 10 months after a magnitude 7 earthquake devastated Haiti in January, it is worth noting something that has not come to pass: Social unrest has not become widespread, as some feared it would, although thousands of homeless are still living in tents in and around Port-au-Prince; doctors have not reported residual public health calamities or outbreaks of contagious diseases, as was predicted; and so far the 2010 hurricane season has spared Haiti from a secondary natural disaster.

Relief that more tragedy has not followed in the wake of the nation’s unprecedented catastrophe was palpable at an international summit of bishops and church leaders who convened in Miami from Sept. 22 to 26. The meeting’s purpose was to forge new mechanisms for rebuilding church life in Haiti and developing strategies to deploy an estimated $330 million in Catholic donations collected worldwide after the disaster on Jan. 12. American Catholics alone contributed some $148 million for humanitarian relief and reconstruction. The Haitian hierarchy committed themselves to a broad-based church reconstruction plan, with substantial support coming from church partners in North America and Europe, called the Program for the Reconstruction of the Church in Haiti.

The reconstruction plan will be submitted to the U.S. bishops for approval at their November meeting. The exact budget has not been finalized, and the bishops expect the reconstruction project to be long and costly. Of the total funds now available, just over $30 million are designated for church rebuilding projects, which bishops concede will fall far short of the actual cost of rebuilding churches, rectories, seminaries, hospitals, convents and a national cathedral that is now in ruins. In terms of humanitarian vulnerabilities in Haiti, most of the concern centers around the patchwork of tent cities in which many Haitians are still forced to seek shelter. In the absence of other authority, gangs have reportedly stepped in, and the victimization of women and children has been on the rise.

The Most Rev. Joseph Gontrand Décoste, S.J., bishop of the south Haitian diocese of Jérémie, who visited Miami for the meetings, said his diocese has received some 14,000 families, or 100,000 refugees since the earthquake. “We didn’t want to have that same dynamic of the camps because it makes the situation more complicated, so we found them placement with host families or families of origin,” Bishop Décoste said. Many have since migrated back to Port-au-Prince in search of employment opportunities.

“From my personal perspective, while they are deeply impacted, this is not a paralyzed and traumatized [church],” said Andrew Small, O.M.I., director of the Subcommittee on the Church in Latin America of the U.S. Conference of Catholic Bishops’ Office of National Collections. “What we have done over the past nine months is act as very necessary buttresses to a very weak and traumatized people to help them get back on their feet so that they can start thinking again about the future—which is going to be very difficult,” Father Small said.

Haitian church officials presented a detailed and updated picture of the damages to church institutions, universities, hospitals and parish life in Haiti during the conference. “We saw purpose, resolve, energy and love for the people. We were surprised at the level of detail that the Haitian bishops came up with.”

Tom Tracy is a photojournalist based in south Florida.