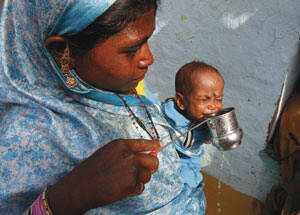 A generation after the end of the cold war and a decade after the terrorist attacks of Sept. 11, 2001, the Global Priorities Initiative proposes to redirect resources saved by nuclear arms reductions toward international peace-building, connecting cuts in nuclear weaponry to the well-being of the world’s children. The Pontifical Council for Justice and Peace offered its “full support” for the initiative in a letter on July 15 to America’s editor in chief, Drew Christiansen, S.J., and the initiative has generated widespread support from Christian churches globally. In the letter the council’s president, Cardinal Peter K. A. Turkson, commended the initiative’s interest in reducing expenditures on nuclear armaments and channeling the savings to humanitarian aid.

In a parallel move on July 26, the Lutheran World Federation, in its 11th assembly, called upon its member churches “to co-sponsor and otherwise assist the Global Priorities Campaign.” The campaign’s international coordinator, Arnold Kohen, said: “This is a real breakthrough. It helps pave the way toward concrete success in the not-too-distant future.”

A bipartisan U.S. Congressional measure (H.R. 278), the Global Security Priorities Resolution, intends to provide legislative support to the initiative here in the United States. The bill, introduced by Representative Jim McGovern, a Democrat, and Representative Dan Lungren, a Republican, now has 34 co-sponsors and is likely to be the subject of action in the U.S. House of Representatives before adjournment in October. Proponents hope that a similar measure will also be taken up by the U.S. Senate.

The resolution seeks an intermediate reduction in U.S. and Russian arsenals to 1,000 deployed nuclear warheads and a total of no more than 3,000 weapons on each side. The resolution predicts that those reductions will lead to savings of at least $13 billion annually and directs $3.5 billion of the savings toward increased nuclear security efforts and $2.5 billion per year toward the Millennium Development Goals of enhancing child survival, alleviating hunger and improving education around the world.

The resolution is supported by an array of experts, including retired Maj. Gen. William F. Burns, a consultant to the U.S. Catholic Bishops’ Committee on International Justice and Peace. General Burns headed the Arms Control and Disarmament Agency under President Reagan and was a key negotiator on the Intermediate-Range Nuclear Forces Treaty and other treaties, such as the Nunn-Lugar Cooperative Threat Reduction Agreement. In a letter to legislative supporters of the resolution, Burns called for sensible reductions in both the Russian and the U.S. arsenals. He said the resolution sets “clear benchmarks for the period ahead, both on nuclear and child survival questions.”

He wrote that H.R. 278 “helps create a path for a redoubling of global efforts to address child hunger, health and education—critical components in the struggle against international terrorism and implicitly a potent weapon against nuclear proliferation.”

The legislation is also supported by the U.S. Conference of Catholic Bishops. In a letter to Congress, Howard J. Hubbard, bishop of Albany and chairman of the U.S.C.C.B.’s Committee on International Justice and Peace, noted improvements in both global child welfare and international security that resource diversions from nuclear weapons could support. Bishop Hubbard wrote: “The Marshall Plan long ago demonstrated that greater political and economic security comes from addressing human needs and poverty. The Global Security Priorities Resolution provides the tools to enhance human security and reduce the threat of international terrorism.”