The Music of Napoli: In search of a lost Jesuit oratario 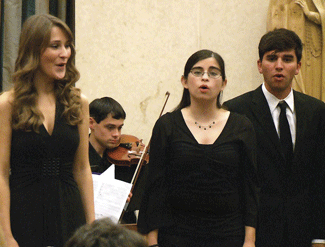 I looked out on the city of Naples from the steps of the Church of San Antonio a Posillipo, where my parents were wed and I was christened, and contemplated a likely dead-end in my current research project. It was spring 2008, and I had returned to Naples, as I did every year, to work. A historical musicologist, I specialize in the music, musicians and artistic culture of Naples.

This time I was researching the history of the Society of Jesus in Naples and its use of music in the 18th century. The Jesuits have had a long tradition of cultivating the arts, but I had a few basic questions: Had any music-making occurred in Jesuit institutions in Naples, and did any of this music survive? More important, what was the purpose of the surviving music, and what might it tell me about the Jesuits and their fostering of the arts? As my gaze lingered on the city, my mind replayed events of the past year, the clues and surprises, though at one point the whole effort had seemed in jeopardy.

Nicola Ceva and the Collegio

My interest in Jesuit patronage of the arts in Naples started in 2007, when a colleague, Anna Celenza (chair of the department of performing arts at Georgetown University), and I organized a conference on Jesuits and music to be held the following summer. I hoped to speak on how the Society of Jesus, ever since its arrival in Naples in 1552, had developed a connection to the city’s renowned musical culture. So I read the Gazzetta di Napoli, the official periodical of the Kingdom of Naples at the time, a treasure-trove of names, places and cultural events. Accounts there revealed that the Jesuits were patrons of music, theater and even dance in their local schools. The Collegio dei Nobili, a Jesuit boarding school so named because of the number of children from noble families educated there, had special status. Its students organized and performed musical works to celebrate days of religious importance or to coincide with the conclusion of the academic year. By the mid-18th century, the Collegio dei Nobili had even constructed a school theater.

In the early part of the 18th century, the name of Nicola Ceva appeared often in connection with works performed at the Collegio, and I was cautiously optimistic that more information about him could be found. Ceva was a native of Naples, trained in one of its famed musical conservatories, who became a priest (most likely not a Jesuit) as well as a highly skilled musician. According to the Gazzetta, Ceva was the maestro di cappella of the local music school, the Conservatorio dei Poveri di Gesù Cristo, a position of considerable prestige in Naples at the time. Given this status in musical circles, Ceva’s association with the Jesuit Collegio dei Nobili is proof that the Society had attracted the best musicians in Naples, a city of entertainment. But had any music by Ceva survived? The answers could come from only one institution: the Library of the Conservatory of Naples, San Pietro a Majella.

Located in a former monastery, the library was established in the 19th century as the official repository for the musical patrimony of Naples. Its two floors are lined from floor to ceiling with thousands of precious manuscripts. Though I spent weeks sleuthing around, nothing turned up until a chance conversation with a friend and longtime assistant at the conservatory, Dr. Antonio Caroccia. He mentioned that many uncatalogued manuscripts had been taken out of storage, and he was certain they were sacred works. As I walked upstairs, my hopes soared.

I was not disappointed. After several hours of work, I recovered a previously unknown oratorio by Ceva, entitled “Trionfo per l’Assunzione della Santissima Vergine.”

“Trionfo” was composed in 1705 to celebrate the feast of the Assumption (Aug. 15), which marks the ascension of the Virgin Mary into heaven. “Trionfo” moved me with the humanity of its poetry, presented not in Latin, the language of the liturgy, but in the vernacular Italian, which was then preferred for opera.

Mary, the Mother of God, is presented speaking in the first person as she awaits her death, contemplates the afterlife and interacts with three allegorical characters: Gloria (soprano), Amor divino (alto) and Zelo (tenor). Individually, and as an ensemble, the four “personages” sing of life, death and the Assumption in utterly human terms: happiness and fear, uncertainty and resolve, understanding and acceptance. Throughout the oratorio there are also subtle references to the Bible. For example, in her first aria Gloria sings, “And with great quantities/ of pure silver/ let the moon form a throne/ to her foot,” imparting a subtle catechism lesson to the audience.

The music was equally fascinating, ranging from arias requiring only a moderate level of singing skill to pieces in the highly florid style of contemporary opera. The roles of Maria, Amor and Gloria were probably performed by students in the Collegio dei Nobili, the practice of the time. The role of Zelo, however, is a musical tour-de-force and requires an expertise and vocal dexterity that suggests that a professional singer played the role. Throughout “Trionfo” is highly lyrical music for the accompanying chamber ensemble and brief preludes and postludes that frame the individual pieces. “Trionfo” is a compelling piece of sacred theater that undoubtedly served the Jesuit mission in Naples to educate, enlighten and serve the “greater glory of God.”

“Trionfo” sent my mind racing in new directions. Returning home, I decided to transcribe the score and translate the Italian for a performance at Georgetown. My plan was to recreate the context that spurred the composition of “Trionfo,” in particular students and faculty in a Jesuit school working together to present this music. The best way to do so seemed to be within the context of an academic course on Baroque music and culture, whose final project would be the presentation of “Trionfo.” Eight students (seven vocalists and a keyboardist) were selected, and I recruited colleagues to help teach the oratorio. We met twice a week (sometimes on weekends, too) and devoted ourselves to studying the 18th century and to rehearsals of “Trionfo.”

The first performance was scheduled for Dec. 3, 2009, not the Assumption but close to the date of another Marian feast, the Immaculate Conception. Each week the students grew more confident as they integrated their academic work with the practical study of “Trionfo.” As the day neared, we shared a measured excitement.

The concert was held at the Jesuit residence on campus, Wolfington Hall, which was filled to capacity. For the performance, an ensemble of professional musicians had been enlisted to accompany the students.

The students were exceptionally well prepared, ready to sing at their very best. More impressive, perhaps, they understood the significance of our recovery of the Ceva oratorio. For the first time since 1705, the voices of Maria, Zelo, Gloria and Amor divino from “Trionfo” were again heard at a Jesuit institution, this time on the banks of the Potomac. At the end, the students received a standing ovation.

What made the project a success was not simply the recovery and performance of the Ceva oratorio. Rather it was the convening of students, faculty and the community at large within a modern-day Jesuit “Collegio” so that we could all better understand the roles and traditions of the Society as it links past to present and looks toward the future.

Anthony R. Deldonnais assistant professor of musicology at Georgetown University in Washington. He is co-editor of The Cam-bridge Companion to Eighteenth-Century Opera (Cambridge, 2009) and co-editor (with Anna Celen

Fascinating article. When will one of the many early music groups, either in Europe or the US, give us a recording?

Thanks, Dr. Deldonna, for a tantalizing glimpse into this intriguing world of Jesuit musicianship.  I have the impression that a trove of baroque music written by Jesuit missionary/composers was found in Brazil some time ago, and wonder whether you could give me any information about this.