Skip to main content
Signs Of the Times
August 2, 2010 issue 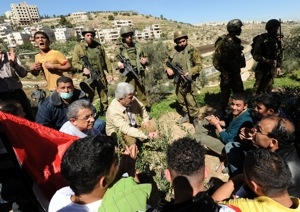 The demonstration began after Sunday Mass. Well-dressed women, men and children holding Palestinian flags and banners strolled leisurely up the windy hillside. They passed a small playground and continued toward an abandoned Israeli army outpost on the outskirts of the largely Christian town of Beit Sahour to protest against a feared reoccupation of the site by the Israeli army at the behest of Israeli settlers.

An Israeli army jeep rushed to the site, siren wailing and, in Hebrew, a soldier with a megaphone informed them they had entered a closed military site. He gave them one minute to disperse. Instead, the people linked arms and began to pray. A tear gas canister was lobbed at the group, as fathers grabbed their children in their arms and mothers pulled their children away.

The protesters vowed the Israeli reaction would not keep them away, and the following week a group—primarily men—returned, and the scene repeated itself. This time some of the Palestinian young men had covered their faces with kaffiyehs, and when the fire of stun grenades, rubber bullets and tear gas began, they responded by throwing rocks, despite the urging of several of the older adults to stop.

In another incident earlier this year, Mazin Qumsiyeh, a Palestinian Catholic, and three others were arrested for sitting quietly in front of bulldozers near al-Walajeh. Border police used pepper spray and beat two brothers fr om the village as they arrested the men, who did not fight back. The men, later released, were trying to prevent construction work on the Israeli separation wall being built around the village.

"Christians are integral members of Palestinian society and have been involved in all phases of the resistance from its inception until today," said Qumsiyeh, chairman of the board of the Palestinian Center for Rapprochement Between People and coordinator of the Popular Committee Against the Wall and Settlements in Beit Sahour. "We cannot really distinguish Christian from Muslim forms of resistance."

Qumsiyeh, a scientist who returned to Bethlehem two years ago after a long hiatus of studying and teaching in the United States, has been accused by detractors of disseminating misinformation and using racist rhetoric against Israel on the Internet and in publications. Like others active in the nonviolent movement, Qumsiyeh is careful not to criticize violent actions against Israeli targets perpetrated by other Palestinian groups, noting that Palestinians have the right to fight the Israeli occupation, though he personally supports nonviolent methods.

"People can disagree on forms of resistance that are most effective to achieve the goals of liberation. Those of us who support a nonviolent mass movement also differ in whether we should confront those who engage in throwing stones or even those who pick up arms to fight the far more violent occupation forces," he said.

Palestinians began seeing nonviolence as a legitimate tool against the Israeli occupation in 2002, after the nearly 40-day siege at the Church of the Nativity, when armed Palestinians ran into the church during a gunbattle with Israeli soldiers. "There was a ... shift in Palestinian mentality that violence was not getting us anywhere," said Sami Awad, a member of the Holy Land Trust, a nonprofit organization committed to nonviolence. He said militant groups such as Hamas and the Al Aqsa Martyrs' Brigade asked the Holy Land Trust to hold training in nonviolent techniques and strategies—although there is a "broad definition of nonviolence."

"Many people see it as being passive, sitting in a circle, but when we talk of it we talk about it as a resistance—not sitting around expressing our feelings, but ... actively standing up to injustice," he said. "We stood our ground. We believe in what we are doing. We would confront militants and ask them what they had achieved for us ... retaliation and revenge. It wasn't easy, but by standing our ground we didn't fall into the trap of their accusations."

"Part of the training is how to take action and redirect anger and frustration to other actions," Awad said, noting that the challenge for the nonviolence movement is to educate people so that when they join demonstrations they do not fall back into the familiar pattern of violence.

Some Palestinian leaders like Prime Minister Salam Fayyad, have jumped on the bandwagon and participated in protest marches, planting olive trees and endorsing a boycott of Israeli settlement goods.

So far Israel has proved to be unprepared to deal with nonviolent protests, though some attempts have been made at using water guns and odorous sprays to quell protests rather than by more conventional means. Protesters have been seriously injured at demonstrations, and several Palestinians have been killed. Stun grenades, rubber bullets, tear gas and arrests still seem to be the Israeli weapons of choice.