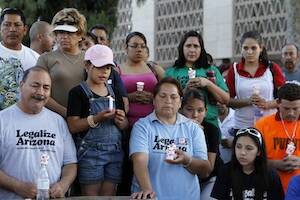 The heated national debate over Arizona’s new immigration law has obscured the fact that there is “actual common ground” among Americans on “key elements” of immigration reform, said Cardinal Roger M. Mahony of Los Angeles. In a statement dated July 12, Cardinal Mahony cited five areas of commonality: the need for the home countries of immigrants to take greater responsibility for the plight of their citizens; increased border security; making more visas available for unskilled workers; the importance of filling agriculture jobs; and the implementation of the Dream Act, which would allow children of undocumented immigrants brought to the United States at an early age to become legal residents. One area that “creates sharp divisions among us” is the proposed path to citizenship for those currently in this country illegally, Mahony said. Immigrant advocates are not proposing a “general pardon,” he explained. “Immigrants here without permission would be required to pay for their transgression and ‘get right’ with the law, then earn their way toward eventual citizenship,” he said.