Skip to main content
Signs Of the Times
June 7, 2010 issue 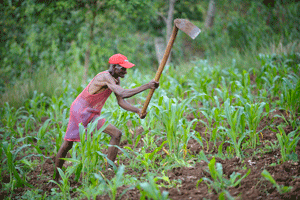 Advocates for Haitian peasants said a U.S.-based company's donation of up to 475 tons of hybrid vegetable seeds to aid Haitian farmers will harm the island-nation's agriculture. Haitian farmers and small growers traditionally save seed from season to season or buy the seed they desire from traditional seed markets. The advocates contend the donation is being made in an effort to shift farmer dependence from local seed to more expensive hybrid varieties shipped from overseas.

However, an official from the St. Louis-based Monsanto Co. said that the seed is simply a donation to the Haitian government. The first two shipments—135 tons—of hybrid varieties of corn, cabbage, carrot, eggplant, melon, onion, spinach, tomato and watermelon arrived in Haiti during the first two weeks of May.

Bazelais Jean-Baptiste of the Peasant Movement of Papay, the primary group opposed to the donation, said that farmers usually are skeptical of unknown seed varieties. "From my experience, the peasant [farmer] is very careful in using the seeds, particularly corn," Jean-Baptiste said. "They would not plant a seed they did not know because they invested time to prepare the land and the seed."

In a widely distributed e-mail in mid-May, Jean-Baptiste's brother, Chavannes, executive director of the peasant group, excoriated the seed donation as "a new earthquake." He said the entry of Monsanto seed into Haiti was "a very strong attack on small agriculture, on farmers, on biodiversity, on Creole seeds ... and on what is left of our environment in Haiti."

The Haitian Ministry of Agriculture welcomed the gift in April, but only after Monsanto assured officials that the seeds were not genetically modified varieties. Ministry officials refused an earlier gift of herbicide-treated seed.

The seed is being distributed to farmer stores for sale at significantly reduced prices. News reports said the seed has been sent to Leogane, Arcahaie and Mirebalais. Some of the seed is being distributed by a U.S. Agency for International Development program designed to increase farmer productivity. The five-year-long Watershed Initiative for National Natural Environmental Resources program, or WINNER, provides in-country expertise, technical advice, fertilizer and other services to farmers.

The program recently distributed 60 tons of the donated seed to seed stores.

"If hybrids are introduced with proper technical assistance, which WINNER is providing, the farmers can get the most out of these seeds," said Adam Reinhart, agriculture officer for USAID's Haiti Task Team.

In a statement June 1, Monsanto denied it was using the donation to open doors to the Haitian market. "We have a small vegetable business in Haiti today, sold through a distributor," said Monsanto spokesman Darren Wallis. "We do not have a commercial corn business in Haiti. Our goal is to help build a sustainable agriculture system to benefit the people of Haiti."

He said the hybrid seed varieties would produce higher yields of crops than the open-pollinated varieties traditionally used by the Haitians.

Wallis also expressed concern that anyone would encourage farmers to burn the donated seed because "the ones hurt by the action will be Haitian farmers and the Haitian people, not those watching on the sidelines."

The finding came during a 10-day assessment of seed needs in Haiti's Sud department—southwest of Port-au-Prince—six weeks after the magnitude 7 earthquake destroyed a significant part of the country. The study looked at the supply and demand for the five most common food security crops: bean, corn, sorghum, pigeon pea and peanut.

Co-authored by Dina Brick, technical adviser for food security at CRS, the report found that the major concern among farmers after the earthquake was their inability to pay for seed. To compensate, cash-strapped farmers told the researchers they planned to buy less-expensive seed and reduce the amount of seed planted.

The cash shortage among farmers is fueled by the relocation of people who fled earthquake-ravaged regions and moved in with family or friends in rural communities, Brick said. Brick, who was in Haiti undertaking a countrywide seed assessment study with several other nongovernment organizations, said that, during the first study, seed suppliers and farmers told her that seed supplies were sufficient. Growing seasons vary depending on the crop.

CRS also is concerned that seed donations from outside of Haiti may undermine local markets while limiting the types of seed available, Brick said. "We need to make sure that farmers have a choice on what seed they can access," she said. "Seed vouchers and fairs enable farmers to choose the crops and varieties they want and need. Seed aid doesn't always do that; it makes assumptions sometimes."

This article also appeared in print, under the headline “Monsanto Lands Seeds of Conflict in Haiti,” in the June 7, 2010, issue.