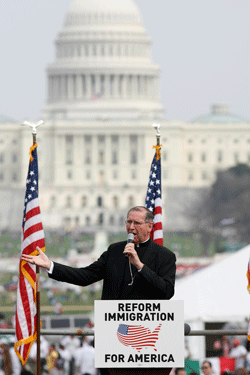 These remarks were delivered at Fordham University on May 3, 2010 at a lecture sponsored by America and the Fordham Center on Religion and Culture.

On March 21st, I addressed some 250,000 people who were gathered on the Mall in Washington, D.C., for a rally in support of comprehensive immigration reform. In my remarks, I pledged that the Catholic Church would never stop advocating for our immigrant brothers and sisters, and that we would continue to defend their right to be full members of our communities and nation.

That same day, as you may remember, our country’s Congressional legislators were voting on landmark health care reform legislation. It was the culmination of a partisan battle that left both sides bitter and exhausted. And so, in conversation with a few key legislators and their aids the next day, I was disappointed but not altogether surprised to discover that a bi-partisan push for comprehensive immigration reform seemed yet again to be drifting off the legislative agenda and into the fog of uncertainty and inaction.

With the stroke of her pen, Arizona Governor Jan Brewer not only signed into law the country's most retrogressive, mean-spirited, and useless anti-immigrant legislation, her action has helped to reinvigorate the comprehensive immigration reform movement, and has made clear the  consequences of the failure to fix our nation’s broken immigration system. As President Obama said:

Our failure to act responsibly at the federal level will only open the door to irresponsibility by others.  And that includes, for example, the recent efforts in Arizona, which threaten to undermine basic notions of fairness that we cherish as Americans.

One main section of the Arizona law illustrates the disappointment so many of us feel at this time. Article 8, Section 2, Paragraph B of SB 1070 sums it up in its vague and vexing language: “For any lawful contact made by a law enforcement official or agency of this state or a county, city, town or other political subdivision of this state where reasonable suspicion exists that the person is an alien who is unlawfully present in the United States, a reasonable attempt shall be made, when practicable, to determine the immigration status of the persons. The person’s immigration status shall be verified with the federal government pursuant to 8 United States Code section1373(c).”  [emphasis added]

The night of Thursday, April 29th, HB 2162 was hurriedly passed in Arizona because of the torrent of opposition generated across the country in regard to SB 1070. The “reasonable suspicion” language remains as just quoted, but the “lawful contact” wording was changed to focus upon secondary enforcement. But the changes could actually result in more people being questioned about their legal status when the police are enforcing any state or local law, or even local ordinances. Does this mean that simple infractions such as overgrown yards, parking on streets, and non-functioning cars in driveways could spark a check on legal status?

The obvious fear is that untold numbers of people will be challenged to prove their legal status in our country—sending further fear and fright across the immigrant community. Neither the Governor nor any major Arizona official is willing to publish a one-page set of criteria to guide law enforcement personnel on what “reasonable suspicion” means in the field.

So, it is with a renewed sense of energy and urgency that I speak with you tonight. I am eager to hear our distinguished respondents, and to engage in dialogue with all of you during the question and answer period. I will begin with a few theological musings that reflect our church’s concern for the immigrant and the stranger. Then I would like to share something of my sense of where things are politically regarding the prospects for comprehensive immigration reform legislation. I will conclude with an invitation for all of us to view our immigrant peoples no longer as strangers or statistics, but to see and hear them as real, flesh-and-blood human beings—neighbors, family members—whose lives are adversely impacted every day that our leaders fail to enact just and fair immigration reform.

Speaking of hearing and of justice, it is intriguing to note that in the Bible, injustice is often discussed as a serious “hearing problem.”

In the Biblical tradition, injustice is often treated as being related to two kinds of “hearing problems.” The first problem is not only our own inability or even unwillingness to hear the cries of suffering from our own brothers and sisters. That is bad enough.

What does Scripture tell us about these “hearing problems”?

The first act of violent injustice was Cain’s murder of his brother Abel. Genesis 4:10 portrays God demanding an explanation from Cain: “And the LORD said, ‘What have you done?  Listen; your brother's blood is crying out to me from the ground!’” (Gen 4:10)

In other words, the God of the Bible hears unjust bloodshed. The text suggests that God “hears” the blood of oppression and suffering. So, it is precisely God’s hearing the cries of injustice that led the Israelites to cry to God in their suffering as slaves and alien workers in Egypt: “After a long time the king of Egypt died. The Israelites groaned under their slavery, and cried out. Out of the slavery their cry for help rose up to God” (Exodus 2:23).

The Bible teaches that God’s hearing began the great act of liberation that gives birth to God’s people. Israel is created from this redemption from the oppression of slavery. Pharaoh’s hearing problem had its consequences!

Moses, according to the tradition, warns us that God will certainly hear the prayers of those we might oppress or abuse:
“You shall not wrong or oppress a resident alien, for you were aliens in the land of Egypt. You shall not abuse any widow or orphan. If you do abuse them, when they cry out to me, I will surely heed their cry” (Exodus 22:21-23).

The writer of Proverbs states that we must also listen to the cries of the poor, or God will close off God’s “ears” to our own cries. In a very powerful sense, when it comes to the prayers of the suffering, our hearing problems will become God’s hearing problems when it comes to our own prayers:  “If you close your ear to the cry of the poor, you will cry out and not be heard” (Prov 21:13).

The earliest Christians witness to this same hearing problem. The New Testament also teaches that the leader of the first Jerusalem Church, St. James, sometimes referred to as James the Just, spoke about this same kind of hearing problem:
“Listen! The wages of the laborers who mowed your fields, which you kept back by fraud, cry out, and the cries of the harvesters have reached the ears of the Lord of hosts” (James 5:4)

How pertinent are the words of James. Who, in fact, “mows the fields” of California and this nation today? Who, in fact, are the harvesters whose wages we have underpaid, whose provisions for healthcare we have resented, despite their back-breaking work to provide for our dinner tables?

The horrific new anti-immigrant law in Arizona presents a new opportunity for our federal officials to rise above the political divisions and posturing that killed reform legislation in 2006 and 2007. Republicans and Democrats recognize the important growth and strength of the Latino vote. Both parties are scrambling to claim it, but have yet to take action.

Right now in Congress, the Democratic leadership is preparing legislation for introduction. New York Senator Charles Schumer is taking the lead on this, and has been working hard to achieve a bi-partisan consensus. I call upon both parties to go that extra mile to reach an agreement that can pass Congress and be signed by the President—sooner rather than later.

The central feature of reform should be to bring the 12 million undocumented immigrants out of the shadows and offer them a secure path to legal status. In return, these immigrants must learn English, pay a fine, and work for several years before earning the right to receive permanent legal status. Some have described this grueling journey “amnesty”—they are wrong. What is being proposed is a path forward which will require enormous sacrifices on the part of the immigrants every step of the way. Another feature of reform would provide for a new worker visa program that would allow more migrant workers to enter the U.S. legally; improvements to our family-based reunification system should also be included in any reform bill.

In March, a poll by the Public Policy Institute of California revealed that 70 percent of Californians said illegal immigrants who have been living and working in the U.S. for at least two years should be allowed to keep their jobs and eventually apply for legal status. Fifty-four percent believed that immigrants were a benefit to California because of their hard work and job skills.

Attitudes toward immigrants are beginning to change, but we need to do more to ensure that we do not become a nation that treats those who “look foreign” as suspect and to be investigated, even arrested, merely on the basis of their appearance.

This is where Catholic leaders and institutions like Fordham University come into the equation. We need to continue to educate Catholics who are ambivalent or undecided about immigration reform. We need to urge them to “come out of the shadows” themselves and become involved in the solution.

The Catholic community is central to victory and justice on this issue. We are an immigrant church ourselves, since the founding days of the republic. The immigrant experience is our own, having come to these shores from all parts of the world. We should be front and center in leading the charge for immigration reform—not only because it is a matter of justice but also because it is part of our identity, of what we are as a church.  Our Lord, Jesus Christ, was Himself an itinerant preacher with “no place to lay His head” and a refugee who fled the terror of Herod. When we welcome the newcomer, in person or through our advocacy efforts, we welcome Him.

As we have seen, Scripture is clear that even when we do not hear the cry of the immigrant, God most certainly does.  In order to improve our own hearing in the Archdiocese of Los Angeles, I have begun to personally interview our undocumented brothers and sisters. Some of the interviews are already available for viewing at www.facesofimmigrants .org. I conclude my remarks with a small sampling of two of these stories. I invite you to listen to the witness of the many who are crying out for justice.

Thank you and God bless you.

Cardinal Roger M. Mahony is the archbishop of Los Angeles.