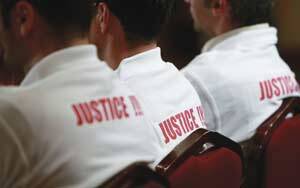 Pope Benedict XVI met in Malta with eight victims of sexual abuse by priests and promised the church would do “all in its power” to bring offenders to justice and protect children.

The pope was “deeply moved by their stories and expressed his shame and sorrow over what victims and their families have suffered,” a Vatican statement said after the private encounter on April 18. “He prayed with them and assured them that the church is doing, and will continue to do, all in its power to investigate allegations, to bring to justice those responsible for abuse and to implement effective measures designed to safeguard young people in the future,” the statement said.

After his return from Malta, Pope Benedict spoke before a general audience in St. Peter’s Square on April 21. Describing his experience with the Maltese victims of abuse, he said, “I shared in their suffering and, with emotion, I prayed with them, assuring action on behalf of the church.” It remains unclear what specific action the pope has in mind. Various national bishops conferences have implemented procedures for handling priests accused of sexually abusing children. None are more stringent than the zero-tolerance policy adopted by the United States, now being held up as a model, which bars credibly accused priests from any public church work while claims against them are under investigation.

The meeting at Malta’s apostolic nunciature in Rabat came after a group of victims had asked to meet with the pope to tell him of their ordeal and ask for an apology. Participants at the meeting said the victims cried as they told their stories and that the pope had tears in his eyes as he listened. “We now have peace in our hearts, even because the pope found time to meet us. We now look forward to the end of the court case, and closure of this chapter,” one unidentified victim said.

The Vatican spokesman, Federico Lombardi, S.J., told journalists that the private meeting in the chapel of the nunciature lasted about 20 minutes. He said the pope, Archbishop Paul Cremona of Malta, Bishop Mario Grech of Gozo and eight male victims of abuse began the encounter kneeling in silent prayer. Pope Benedict then stood by the altar and met with each victim privately, Father Lombardi said.

At the end of the meeting, participants said a prayer together in Maltese and the pope blessed the victims. One victim said the pope gave each of them a rosary and promised them they would be in his prayers. “I admire the pope for his courage in meeting us. He was embarrassed by the failings of others,” said Lawrence Grech, a victim of abuse who had pushed for the meeting. Grech said he and the other victims at the meeting had been abused as boys by four priests at the St. Joseph Orphanage in Santa Venera.

Archbishop Cremona met on April 13 with a group of victims, including Grech, at their request. That meeting, which lasted two and a half hours, was “a great help” to the victims, Grech told reporters. He said his only wish was that the meeting with Archbishop Cremona had happened earlier. “We have been waiting for seven years for our case to end, but justice has not yet been done,” he said.