Vatican Goes on Defense in Response to Media Reports 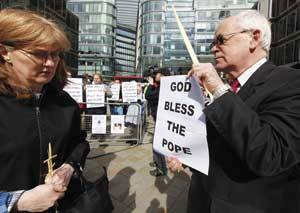 Church officials at the Vatican and elsewhere amplified their defense of Pope Benedict XVI and his decisions regarding sexual abuse of minors by members of the Catholic clergy and rejected accusations of a continued cover-up after a series of reports in The New York Times and publications around the world that criticized the pope for alleged inaction on abuse cases. Vatican authorities emphasized that it was the pope who, as Cardinal Joseph Ratzinger, pushed for harsher measures against abusers and made it easier for the church to laicize them.

On March 27, the Vatican newspaper, L’Osservatore Romano, ran a front-page commentary by Archbishop Vincent Nichols of Westminster, expressing shame over sexual abuse by clerics but strongly defending the pope’s efforts to curb it. “What of the role of Pope Benedict? When he was in charge of the Congregation for the Doctrine of the Faith he led important changes made in church law: the inclusion in canon law of Internet offenses against children, the extension of child abuse offenses to include the sexual abuse of all under 18, the case by case waiving of the statute of limitations and the establishment of a fast-track dismissal from the clerical state for offenders,” Archbishop Nichols wrote. “He is not an idle observer. His actions speak as well as his words,” he said.

Federico Lombardi, S.J., the Vatican spokesman, said impartial observers would recognize that the pope and the doctrinal congregation are continuing to guide bishops and help them “combat and root out the blight of abuse wherever it appears.” The pope’s letter to Irish Catholics earlier this month demonstrated his commitment to “healing, renewal and reparation” in the church, he said. Father Lombardi pointed to the “many positive signals” that indicate the church has understood the problem and addressed it. For example, he said, a recent report showed that the number of reported sexual abuse cases declined between 33 and 36 percent in U.S. dioceses and religious institutes between 2008 and 2009.

“It must be recognized that the decisive measures currently being implemented are proving effective: the church in the United States is on the right road to renewal,” Father Lombardi said. And Cardinal Walter Kasper, the Vatican’s top ecumenical official, said on March 27 that the pope’s “courageous” letter to Irish Catholics indicated that the church was on an “irreversible” path toward greater transparency and severity in dealing with sexual abuse by priests.

But even as Vatican officials defended Pope Benedict, U.S. victims of sexual abuse by priests visited Rome on March 25 to call on the Vatican to establish universal and immediate norms for responding to reports of abuse of children. Peter Isley of the Survivors’ Network of those Abused by Priests said, “We want Pope Benedict to break down this wall of secrecy which has caused so much damage and harm in our church and to open up the files so that we can see exactly how he’s been handling these cases.”

The founder and president of SNAP, Barbara Blaine, said church files should be handed over to the police because the information represents criminal evidence. “The church should not be investigating sex crimes any more than the police should be telling the pope how to prepare his homily for Easter Sunday,” she said.

Isley said universal norms are imperative, because the sexual abuse of minors by religious is not a problem that affects only one or a few countries. “This is a global problem” that has to be dealt with, he said.