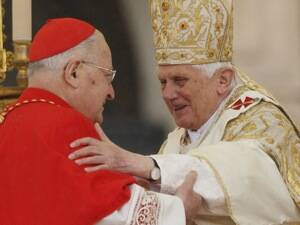 Two pending federal lawsuits seek to pull the Vatican into U.S. courts over claims that it is liable for damages to victims of sexual abuse by priests. And in Britain, attorneys are said to be investigating whether Pope Benedict XVI himself might be charged, when he goes to England and Scotland in September, with crimes against humanity over the alleged mishandling of sexual abuse cases.

The U.S. Supreme Court this term will consider accepting an appeal of a 2009 lower court ruling saying the Holy See is not protected under sovereign immunity from lawsuits by victims of clergy sexual abuse. Under the principle of sovereign immunity, attempts have been historically unsuccessful to hold the Holy See—or any sovereign entity—liable in U.S. courts for civil damages related to actions by individuals. But the 9th U.S. Circuit Court of Appeals ruled in March 2009 that under a provision of Oregon law, an alleged victim of sexual abuse may continue his effort to hold the Vatican liable for damages after he was sexually abused by a priest while he was in high school.

The court said that the plaintiff, John Doe, had "sufficiently alleged" that the late Servite Father Andrew Ronan was "an employee of the Holy See acting within the 'scope of his employment' under Oregon law." That allows Father Ronan's actions to be attributable to the Holy See for jurisdictional purposes, the 9th Circuit ruled.

That case is on appeal to the Supreme Court, which last fall invited Solicitor General Elena Kagan to weigh in on the matter from the perspective of the U.S. government. Jeffrey Hunter Moon, solicitor for the U.S. Conference of Catholic Bishops, said that such an invitation is typically followed near the end of the court's term with a brief from the solicitor general discussing the merits of the appeal. That brief then becomes a part of the court's consideration of whether to add the case to its calendar, or, by declining it, to let the lower court ruling stand.

Moon said if the solicitor general urges the Supreme Court to take a case, about 75 percent of the time the case ends up on the docket. The court is scheduled through June to hold conferences on cases and to release lists of those it is accepting or rejecting.

In a separate case, the U.S. District Court in Louisville, Ky., has been asked to find sovereign immunity does not apply in the case of three men who want to sue the Vatican for negligence. They are seeking class-action status to sue for restitution from the Vatican for what the plaintiffs say was negligence in failing to alert the police or the public about former priest Louis Miller. Miller pleaded guilty in 2003 to sexually abusing children in the 1970s and is serving a 13-year prison term.

Legal expert Giuseppe dalla Torre, head of the tribunal for the Vatican City State, told the Italian newspaper Corriere della Sera that the pope is protected by diplomatic immunity in the more than 170 countries that have diplomatic relations with the Holy See, including the United States. "The church is not a multinational corporation," dalla Torre said. The pope "has [spiritual] primacy over the church ... but every bishop is legally responsible for running a diocese."

British attorneys are investigating whether Pope Benedict could be charged upon his arrival in England this September under the principle of universal jurisdiction, an element of international law, for an "alleged systemic coverup of sexual abuses by priests." Human rights attorney Geoffrey Robertson, who served as an appeal judge at the U.N.-backed Special Court for Sierra Leone, said sovereign immunity would provide no protection for the pope in an international criminal court, under the definition of crimes against humanity, which "includes rape and sexual slavery and other similarly inhumane acts causing harm to mental or physical health, committed against civilians on a widespread or systematic scale, if condoned by a government or a de facto authority."

"If acts of sexual abuse by priests are not isolated or sporadic, but part of a wide practi ce both known to and unpunished by their de facto authority," Robertson wrote, "then they fall within the temporal jurisdiction of the (international criminal court) -- if that practice continued after July 2002, when the court was established."

Vatican officials have emphasized that it was Pope Benedict, who, as Cardinal Joseph Ratzinger, pushed for harsher measures against abusers and made it easi er for the church to defrock them.