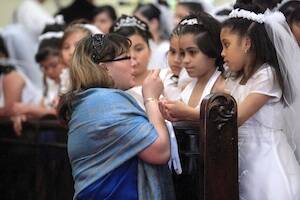 A new analysis of religious identification finds that contrary to popular and scholarly belief, U.S. Latinos are not leaving the Catholic Church for Protestant churches but are becoming more secularized, affiliating with no faith at all. A study released March 16 by the Institute for the Study of Secularism in Society and Culture at Trinity College in Hartford, Conn., reported that Latinos who have left the church since 1990 have shifted toward secularism as they become more Americanized. The study noted that as in the general U.S. population, Latinos became less identified with Christianity between 1990 and 2008, down from 91 percent to 82 percent. Those who said they identified with no faith grew to 12 percent in 2008 from 6 percent in 1990. The American Religious Identification Survey of 2008 reports that Latino immigrants continue to be the largest factor in maintaining the size of the U.S. Catholic population. Latinos comprised 32 percent of all U.S. Catholics in 2008 compared with 20 percent in 1990. Among Latinos, 60 percent in 2008 said they were Catholic, compared with 66 percent in 1990.