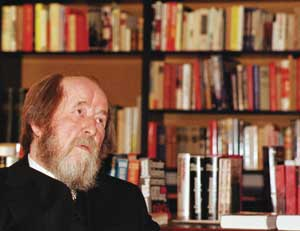 Although he harbored literary ambitions early on, Alexandr Solzhenitsyn, born in 1918, earned a degree in mathematics and physics—a fact that probably prolonged his life. While serving as a captain in the Soviet army during World War II, he was twice decorated for bravery before counterintelligence agents discovered personal letters in which the author wrote disparagingly of Communist leader, Josef Stalin. Found guilty of conspiring against the state, he was sentenced to eight years in the vast network of Stalin’s notorious slave labor compounds—an experience that provided the raw material for his only major work allowed to appear in the Soviet Union: the novella One Day in the Life of Ivan Denisovich (1962), which Premier Nikita Khrushchev himself had authorized as part of his campaign of de-Stalinization. It was an immediate literary and political sensation, catapulting the author onto the center of the world stage.

From hell Solzhenitsyn passed into purgatory. He survived his incarceration, he felt, only because the authorities decided to make use of his scientific knowledge. It was his transfer to a sharashka—a government-run prison and research institute, where conditions were much less harsh—that was both his physical and spiritual salvation as well as the source for In the First Circle (2009, Harper Perennial), a philosophical and religious novel that has until recently not been available to English-language readers in its complete original and uncensored form. In a desperate effort to get the manuscript past the Soviet censors, the author had made significant changes, including the elimination of nine chapters. This “lightened” version, titled The First Circle (1968)—a reference to Dante’s Inferno, in which the denizens of “the first circle” (the sharashka) are spared the torments of the lower realms (the conventional labor camps)—was leaked to the West and published in numerous languages in the 1960s. The unexpurgated edition went to press in English after the author’s death in Moscow four months shy of his 90th birthday.

In his fine biography of Solzhenitsyn, Alexandr Solzhenitsyn: A Century in His Life, D. M. Thomas points out that the suffering endured by his subject was actually beneficial in that it brought about a dramatic intellectual and spiritual transformation. Without the usual distractions of worldly concerns, there was an abundance of time for intense introspection, for listening to the inner voices and turning to God. The youth who had declared, “I would gladly give my life for Lenin” became a dissident of incredible fearlessness, whose mission it was to break the conspiracy of silence and expose the full horror of Soviet tyranny. As Dostoyevsky had done a century earlier, Solehenitsyn blessed his prison for having nourished his soul. Like his literary predecessor, he felt that his sufferings as a prisoner in Siberia had renewed his faith, and he was determined not to permit material pleasures to undermine the grace that had been bestowed on him. “When one’s life is stripped down to the bone,” he wrote, “one lives the spirit of the Gospels.” The once militant atheist returned with humility and joy to the Russian Orthodoxy of his childhood. With justification, Joseph Pearce, author of Solzhenitsyn: A Soul in Exile, calls In the First Circle “a hymn of praise to the pursuit of truth in the midst of tribulation.”

The addition of the preposition “In” to the title subtly shifts the focus from the existence of this level of hell to its occupants. There are changes in the plot. The portraits of some of the major characters—based on real life prototypes—are more fully developed, and new personages are presented along with the politically sensitive questions they raise, such as whether Stalin had served as a double agent for the tsarist secret police and whether the Soviet Union should possess nuclear weapons. Of greater importance is the author’s insistence on revealing the flagrant Soviet lies about the actual course of events. And, to be sure, the excised chapters have been reinstated; in one the reader enters the mind of Stalin—a prisoner of his own paranoia—as he considers the possibility of the existence of God.

The novel is, in part, a detective story: A diplomat makes an anonymous phone call to the American embassy, and imprisoned scientists, most notably a linguist and a mathematician, are assigned the task of identifying his recorded voice. The book, with its huge cast of characters constituting a cross section of Soviet society—though Eleanor Roosevelt makes a cameo appearance—follows in the Russian literary tradition of realism, redolent of Tolstoy and Dostoyevsky. As in much of Solzhenitsyn’s other writings, the narrative is clearly based on the author’s own personal experiences during his imprisonment. By compressing the time frame from three years to just four days, the tension inherent in the drama is heightened. One leitmotif is voiced by the hunted diplomat who asks, “If we live in a state of constant fear, can we remain human?”

When Solzhenitsyn completed his prison term, he was exiled “in perpetuity” to Soviet central Asia, where he lived in a mud hut on the edge of a desert. He taught math and physics in a secondary school and began writing prose poems, short stories and plays. Owing to Khrushchev’s influence, his sentence of exile was eventually suspended, and he returned to central Russia. When less tolerant regimes rose to power, however, the socially involved writer fell from official favor. Because he was increasingly regarded by the authorities as a dangerous and hostile critic of Soviet society, his succeeding works were banned, including the novel The Cancer Ward (1968), which explores the relationship between the corporeal and spiritual aspects of love while evoking the author’s nearly fatal bout with that disease. Whereas Solzhenitsyn’s books found an enormous audience abroad, in his own country they had to be circulated in samizdat (clandestine, self-published editions). Granted the Nobel Prize for literature in 1970, he refused to attend the awards ceremony because the Communist government would not guarantee his re-entry into Russia.

Following the French publication of probably his best known work, The Gulag Archipelago (1974)—a monumental, detailed history of the Soviet prison system and its punitive psychiatric hospitals, in which, according to the author, some 60 million people were confined during the 20th century—Solzhenitsyn was accused of treason, stripped of his citizenship and expelled from his homeland. He traveled to Stockholm and collected his Nobel Prize.

At a press conference, he warned that upon the breakup of the Soviet system, Russia would have to move toward democracy “cautiously and slowly.” Espousing the age-old definition of literature as “delightful instruction,” in his Nobel Lecture he identified the artist as one who recognizes above himself a higher power and joyfully works as “a humble apprentice.” Opposing the Soviet dictate that writers must serve the state’s ideology and eschewing the moral relativism that permeates modern thought, he maintained that literature should not only criticize but at times even be didactic.

After a sojourn in Zurich, Solzhenitsyn ultimately settled in Cavendish, Vt., with his wife and three sons, where he lived as a recluse, protected from sightseers by neighbors, who posted a sign that read, “No directions to the Solzhenitsyns.” Devoting himself to the writing of a massive cycle of historical novels that focus on the revolutionary chaos that spawned Bolshevism—a multi-volume work with the series title The Red Wheel (1983-91)—he prayed each morning with his family for Russia. On one of his extremely rare public appearances, he delivered a controversial and insensitive commencement address at Harvard, criticizing the pop culture of Americans, calling the people who had welcomed him and continued to host him spiritually mediocre, worshipers of materialism and cowardly for being unwilling to die for their ideals—alluding to what he saw as a hasty withdrawal from Vietnam. Unlike his wife and children, Solzhenitsyn never became an American citizen. Upon his arrival in Cavendish, he had told the villagers that when the Russian people were liberated from the Soviet system, he would go home—and so he did, in 1994.

Alexandr Solzhenitsyn left behind an enormous canon, a truly unique contribution to literature. The first three volumes of an anticipated 30-volume Russian edition of his collected works are already in print. As striking as this canon is, his personal story is even more impressive. Like Pope John Paul II, whom he greatly admired, he helped to bring down one of the worst tyrannies the world has ever witnessed. A self-appointed conscience to the Russian nation, Solzhenitsyn brought to light what had only been whispered about.

This article also appeared in print, under the headline “Russia's Literary Lion,” in the March 29, 2010, issue.

Ann M. Begley, an essayist and reviewer, has taught at universities on both east and west coasts.