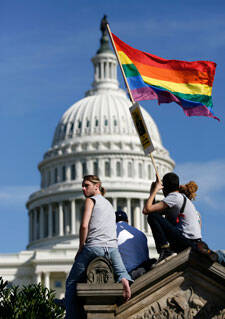 Auxiliary Bishop Barry C. Knestout of Washington said despite news reports to the contrary, “Catholic Charities is vowing to continue its services even if a same-sex marriage bill passes” in the District of Columbia’s City Council. Bishop Knestout made the commitment in an open letter to local Catholics posted on the Web site of The Catholic Standard, Washington’s archdiocesan newspaper. The bishop said the level of services will not be the same, though, because “without a meaningful religious exemption in the bill, Catholic Charities and other similar religious providers will become ineligible for contracts, grants and licenses to continue those services.” Arch-diocesan officials and other religious leaders in the district have said that if the council is going to pass the measure despite their objections, then it must include strong protections for religious conscience. Catholic Charities currently serves 68,000 people in the city, including one-third of Washing-ton’s homeless.