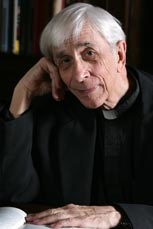 People with what is sometimes called a late vocation are a curious lot. Being one myself, I sometimes compare notes with others who come my way. The most recent was Bryan Pipins, an energetic Australian Jesuit who walked about New York last winter in sockless, sandaled feet while ministering at a local parish. His tough constitution, tested by 13 years in the Australian army and several more with the Jesuit Refugee Service in Africa, has seen him through challenging situations on three continents. The idea of religious life crossed his mind even in primary school. A friend of his father’s, however, advised him to work after high school before applying to enter, “to see if I really had a call,” as Bryan put it. Odd jobs eventually led him to the Australian army and a three-year enrollment. The life suited him and he re-enlisted.

But throughout Bryan’s military years, vocation thoughts remained, so a Jesuit pastor put him in touch with the order’s vocation director. By then Bryan was in his 30s. His novice director sent him to a l’Arche community of adults with Down syndrome, and from there to a remote aboriginal community. In 1999 everything changed abruptly when East Timor “exploded” during its fight for independence. The resulting refugee situation led Bryan to ask and receive permission to work there with the Jesuit Refugee Service.

After Bryan’s ordination, his provincial sent him to teach English as a second language in the Philippines. But given his instinctive desire for contact with the materially poor (an instinct he and I share), he also spent time as a parish priest, attending to people in Manila’s huge garbage dump, which is home to 70,000 of the country’s poorest. Picking through the dump, they scratched out a precarious existence. “The people were mostly from rural areas, and living in the dump they suffered from respiratory infections that shortened their lives along with the lives of their children,” he said.

Finally, Bryan was assigned to work with J.R.S. in East Africa, training adults as teachers of basic literacy skills who could carry on the work after J.R.S. moved on. “When I first visited, after the program had already begun, I found over 50 people in one small room waiting for lessons. ‘There are too many people here!’ I said, but they insisted, ‘We want to learn!’ One woman cried out; ‘Why do I have to wait till I’m 75 to learn to read and write?’” And learn they joyfully did, he said.

J.R.S. next sent him to northern Uganda for further refugee involvement. Did he ever have a day off? No, he replied, “but I was doing so many different things that each task meant tapping into a different source of energy.” Five days a week he was a school administrator, but weekends saw him as a priest in various parts of the huge camp with tens of thousands of refugees. Many died of cholera, he explained, partly because as rural people they were not accustomed to living in close quarters, where sanitary precautions became essential.

Thus far Bryan had enjoyed good health, but then he himself fell ill with typhoid. Now back in Australia, he is serving in a rural Jesuit parish founded for Catholics fleeing persecution in Germany during the 1840s. Two Jesuits accompanied these early religious refugees, so Bryan continues to serve, if not refugees, at least their Australian descendants.

Our stories are vastly different, but we both learned that God’s call can never come too late, whether to religious life—or to lay people who may also be searching to respond to a call of their own. Each person has a vocation. The challenge is to discover what it is and then to live it out.