A War against Women: The corporeal force of 'Ruined' 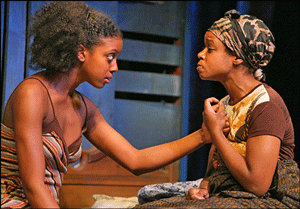 The play of the year isn’t on Broadway and it wasn’t featured at the recent Tony Awards. It’s a sprawling yet intimate drama set in a brothel in the war-torn Congolese jungle, with the decidedly gloomy title “Ruined.” That may sound like unlikely hit fodder, but it’s hard to argue with success: “Ruined” opened in February at the Off Broadway Manhattan Theatre Club, nabbed a Pulitzer Prize in April, and has just been extended through the end of August. And that won’t be the last of “Ruined,” a long-fused critical and commercial firecracker that seems destined to crackle through the culture for some time; it will almost certainly appear at a major regional theater near you, not to mention in an inevitable HBO film version.

Does “Ruined”merit the hoopla? There’s no question that this is a major play by a major playwright. Only a writer of surpassing craft and sensitivity could juggle narrative detail and mortal suspense, gritty reportage and theatrical artifice, as deftly as Nottage does, as she portrays the tragic efforts of a hard-nosed madam, Mama Nadi, to serve all sides in an ever-shifting conflict. If viewers detect echoes of “Mother Courage,” about a war profiteer crushed in the gears of the machine she serves, the parallel is not accidental; Nottage was partly inspired by Bertolt Brecht’s antiwar classic.

But unlike Brecht, who set his play during the distant Thirty Years War, Nottage is writing about a contemporary conflict in the Democratic Republic of Congo, where peace accords in 2003 did little to stem ongoing intertribal violence, cross-border incursions from Rwanda and Uganda, and bitter, bloody competition for control of natural resources. Not coincidentally, it’s also the region with the worst statistics on sexual violence against women. On a fact-finding trip to Africa with the director Kate Whoriskey, Nottage interviewed several women fleeing the mayhem in the D.C.R., who provided a catalogue of routine brutality: conscription into prostitution, rape as an instrument of terror, and, most harrowingly, the genital mutilation that gives the play its title.

Transmuting these horrors into a watchable and memorable evening of theater is Nottage’s core achievement. Faced with central Africa’s seemingly intractable cycles of violence, most writers would be able to convey little more than spluttering outrage, if indeed they could bring themselves to write anything about it at all. It’s a measure of her considerable empathetic strength and moral subtlety that Nottage brings nuance and contrast to this harsh world, and that her characters, crucially for themselves but also for us in the audience, don’t simply scrap and scheme but find room to sing, laugh, even hope.

What finally makes “Ruined”stick, though, is as much the medium as the message. Theater gives audiences the nearly tactile experience of live bodies moving in space, sharing the air we breathe (and it’s especially true of the Manhattan Theater Club’s small Off Broadway house). This palpable corporeality renders the play’s central image—the notion that the wars in Africa are being fought on women’s bodies—all the more devastating and immediate. This is the irony of catharsis: A play as strong and serious as “Ruined,” embodied here by 12 brilliant actors,can make us powerfully feel its characters’ suffering—but it’s a suffering that would be unbearable if it weren’t shared in the intense intimacy of a theater.

While registering a collective twinge of virtual sympathy in a comfortable New York theater could never be confused with the sort of concrete action that might improve the lot of the least of us, it would be a mistake to dismiss the social and, yes, even political impact of a work like “Ruined.” When an injustice is reported and duly deplored, it is nudged ever further into the punishing light of judgment; when it is dramatized and deeply felt, it moves ever closer to heart of mercy.

Rob Weinert-Kendt is an arts journalist based in Brooklyn who has written for The New York Times and TimeOut New York. He writes a blog called “The Wicked Stage.”

Any info on it being taken to other cities?