Grace and the Grotesque: Flannery O'Connor on the page and screen 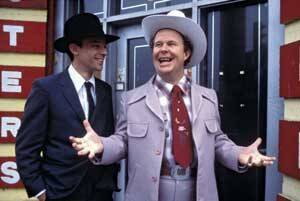 With the opening of the Flannery O’Connor archives at Emory University in 2007, and now the publication of the first major biography, by Brad Gooch (Flannery, reviewed Am. 3/30-4/6), many people are rediscovering this enigmatic Southern Catholic writer.

What we have known for a while may not sparkle, but it still intrigues. Flannery O’Connor was devoutly Roman Catholic in a rigidly Bible-belt South. An only child, she was adored by her father, who died when she was in high school. Flannery inherited his lupus and died herself before the age of 40. For a brief time, she had a romance with a traveling Bible salesman, which later inspired her story, “Good Country People.” She lived most of her years on the family farm in Georgia in an eccentric style, surrounded by her mother, friends who came to visit, and the peacocks, ducks, geese and chickens that she often trained.

O’Connor was a storyteller whose characters represent the strangest sort of people on earth. She shows us ugly characters and reveals the ugly parts in us all. “We’re all grotesque,” O’Connor confidently said in answer to a question about why her characters were odd, often even physically disfigured.

She wrote about what needs forgiving in human life and often depicted violence to do so. O’Connor once expressed admiration for a local Georgia pastor who pinned a real lamb to a wooden cross and then slaughtered it before the eyes of his congregation as a teaching lesson. She also believed that Protestants understood the Mass in ways that were lost on many of her fellow Catholics.

O’Connor felt that it was necessary to shock. “When you can assume that your audience holds the same beliefs you do,” she said, “you can relax a little and use more normal ways of talking to it; when you have to assume that it does not, then you have to make your vision apparent by shock—to the hard of hearing you shout, and for the almost blind you draw large and startling figures.”

I recently asked Uwem Akpan, S.J., the Nigerian priest whose collection of short stories, Say You’re One of Them, was likewise shocking in its portrayal of violence in the lives of children in Africa, for his thoughts on this odd regional American author. “I’m fascinated” he said, “by her incredible understanding of the dynamics of sin and grace in the modern world. I find her work very sacramental and powerful. I’m happy, too, that she was a person of faith who refrained from writing didactic and saccharine stuff.”

O’Connor’s South is sacramental. In “The River” a drowning becomes a kind of baptism. In other tales, small and everyday acts of violence become means of grace, refuting the heresy that sees the world as dualistic. Various groups—including many modern spiritual writers—have argued that the material or created world is somehow necessarily evil, while the spiritual world that fights against it from without rather than from within is inherently good. And so, the theory goes, the more spiritual we become the more we are able to remove ourselves from the world. O’Connor sees it differently. She constructs characters who encounter grace in the midst of what is considered most material and base. Grace is impossible, in an O’Connor story, apart from what we encounter in and through our bodies in the midst of the mess, but more importantly, in the darkness of life.

Several of Flannery O’Connor’s stories have been made into films. In the 1970s, a few Chicago-based artists produced short films from her short stories; these are often available in VHS format at public libraries. More notable is the feature film made by Universal Studios and directed by John Huston in 1979: “Wise Blood.” With a screenplay written by Benedict Fitzgerald, the son of O’Connor’s best friends, Sally and Robert Fitzgerald, “Wise Blood” is faithful to the novel of the same name.

Starring Huston and Ned Beatty, it tells the hilarious story of Hazel Motes, a young, ambitious, uneducated man who is determined to be successful after returning from a war. He decides that, being a Southerner, the quickest way to succeed is to become a country preacher (he believes he’ll succeed because a cab driver has already mistaken him for one). We see Motes attempt to establish what he calls “The Church of Truth Without Jesus.” The film communicates the central themes of O’Connor’s work: the messiness of revelation, that Christ came to reach sinners, that gross sin has a better chance than prim righteousness does of leading to sublime revelation. “Wise Blood” was released on DVD last month.

“Good Country People”—that tale of a Bible salesman who has a brief affair with a well-educated woman with a wooden leg—was made into a short film by Gary Graver, who went on to become a Hollywood cinematographer with Orson Welles. (Graver also made “adult” films under a pseudonym; the bizarre nature of O’Connor’s work attracts all sorts of people!) Today you can find Graver’s 10-minute black-and-white short, made in the 1960s, on YouTube.

O’Connor’s stories are almost always funny, despite the violent, sometimes upsetting turns they take, always aiming toward some sort of revelation or salvation.

Many people will remember another of her characters, The Misfit, from her story “A Good Man Is Hard to Find.” In the story, a bitter old grandmother reaches out to console a hardened criminal, The Misfit, just before he shoots her dead. Only after she has been murdered does the reader learn how she finally saw the truth.

Sweet images for God are almost always torn down by O’Connor. We may see God as big and kindly, strong and comforting, warm and supportive, like an unconditional friend. But O’Connor shows us other sides to the divine-human relationship. The Christian becomes material in the hands of the sculptor, who will lop off and chip away as he sees fit. This is one reason for the strong reactions for and against O’Connor’s storytelling. We are not supposed to like what she shows us. Too often, our God has become domesticated, like a dog on a leash or a spoonful of sugar.

O’Connor was intrigued by the fact that we rarely see Jesus with nice, sophisticated, religious people. We more often see him handing out grace to the people he hangs out with: tax collectors, prostitutes, the sick, the flawed, the rejected and those who have to work so hard to make a living that they do not have time to study the Scriptures. The well-behaved and respectable were the people who most angered Jesus because they were fooling themselves and others. It is impossible, when reading O’Connor, to sustain the nonsense of popular television preachers like T. D. Jakes and Joel Osteen—that the closer we follow Christ the prettier we will become, the wealthier we will become, and the more friends we will have. Jesus says the opposite.

One lasting problem surrounds O’Connor’s legacy. Her attitude toward people of color—in her case, her neighbor African-Americans in Georgia—has been trumpeted by some as enlightened and by others as typically racist for her time and place. She wrote a story called “The Artificial Nigger,” for instance (in 1955—nine years before the Civil Rights Act), which can be seen through either lens.

I asked an African-American Catholic storyteller friend of mine what she thinks. When Claudia Mair Burney first read “Everything That Rises Must Converge,” she was stunned by the “unblinking, hard look at racism.” But when she turned to O’Connor’s letters to “get to know her better,” she found another shock: “I came upon a letter in which she, as glibly as her characters, referred to African Americans as ‘niggers.’ That single word illustrated how very different Ms. O’Connor and I were after all. I closed the book.”

We will most likely never know Flannery O’Connor’s real attitudes toward race. Brad Gooch’s Flannery offers hints, but not many. This was a woman writer who was complicated. But even on this issue, Claudia Mair Burney’s experience with O’Connor shows how she can challenge and startle a reader to see things in a new way:

I recently re-read “Everything That Rises Must Converge,” and this time, I met myself coming and going. With increasing discomfort I found that I identified with the mother, son, and black woman wearing an identical hat. I am proud, naïve, self-congratulatory, angry, and guilty, though a part of me feels I’ve done nothing wrong. I am as complicated as the story, characters, and O’Connor herself. Now I see that, like a double-edged sword, “Everything That Rises Must Converge,” with its violent climax and ending that results in a death, has the remarkable ability to slowly, and with deft blows, kill the racist within me.

Jon M. Sweeney is the author ofLight in the Dark Ages: The Friendship of Francis and Clare of Assisi, and Cloister Talks: Learning from My

@jonmsweeney
Show Comments (
3
)
Comments are automatically closed two weeks after an article's initial publication. See our comments policy for more.
Mary Keelan
13 years 7 months ago
Beautifully written and thoughtful analysis of O'Connor and some of the recent renewed interest in her. Suggests the complexity of her writing but also the seeming contradictions in her person and observations that were the sources for those stories. Gooch's biography combined with a re-reading of her works in the American Library is "an adventure in grace" as Raissa Maritan might say. O'Connor's letters are also a "must read."
Charles Lewis
13 years 7 months ago
I would never try to explain away why Flannery O'Connor would use a word like "n-----" so casually in a letter. But part of it must be the surroundings in which she spent most of her life and the language of ordinary people who surrounded her whose language was harsh but not necessarily poisonous. But reading O'Connor's work it is hard for me to think of her as a racist. Just read the ending of her short story Revelation. She describes Mrs. Turpin turning her eyes toward heaven: "She saw the streak as a vast swinging bridge extending upward from the earth through a field of living fire. Upon it a vast horde of souls were rumbling twoard heaven. There were whole companies of white-trash, clean for the first time in their lives, and bands of black n-----s in white robes, and battalions of freaks and lunatics shouting and clapping and leaping like frogs." It sounds like O'Connor was embracing all God's children.
13 years 7 months ago

I think Ms. O'connor was heavily influence by her time at the writer's institute in Iowa City, IA.  The churchs that she attended one Irish and one German are on the campus.  St. Patricks and St. Mary's must have offered a unique perspective into Vatican I culture and are active parishes today.  Living in the spirit of a lively parisher Ms. Flannery O'Connor....