A Tragedy Unearthed: One priest's quest to document the horrors of the Holocaust 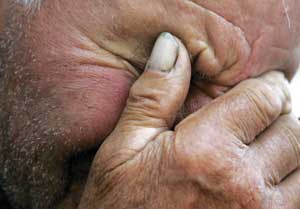 The ground was moving for three days,” the Rev. Patrick Desbois told me several times during our conversation at Sacred Heart University in Fairfield, Conn. The phrase also appears in his recent book, Holocaust by Bullets, which won the 2008 National Jewish Book Award. The ground of which he speaks refers to the earth overlying the mass graves at Jewish extermination sites in Ukraine, where the Nazis killed over 1.5 million Jews during World War II. When Father Desbois interviewed witnesses to that Holocaust, they frequently mentioned the moving earth. “It took me a year to understand what witnesses meant,” he said. At first he thought they were referring to the shifting of the earth as the corpses decomposed. But during one of his many trips to Ukraine, a witness who as a boy had been conscripted to spread earth over a massacre site shed new light: after being shot and pushed into the graves, many Jews were only wounded (partly because of a regulation allowing for only one bullet per victim to save ammunition). After they had been buried, the witness said, he “saw a hand suddenly rise and grasp the spade he was using.” The victims’ subsequent death throes caused the ground over them to move for days.

Father Desbois, a historian and adviser to the cardinal-archbishop of Lyons and the Vatican on the Jewish religion, spends part of each year in Ukraine with a team intent on locating as many mass graves as possible. He first came to know of the Ukraine massacres as a boy from stories told by his grandfather, who was held for three years in a camp near one of the extermination sites. As a young priest, Father Desbois began to travel to the same town to uncover the truth for himself.

Now he works with a special sense of urgency, because witnesses who were children and teenagers at the time of the slaughters are dying off. He explained, “We have only six or seven years left to locate and speak to them.” He added that there is much work to be done not only in Ukraine but also in Belarus, Poland and Russia. “They want to talk before they die, so that the world will know what happened.” Those not conscripted by the Einsatzgruppen (mobile killing units) to spread earth over the bodies might have seen the shootings at a distance from a rooftop or while tending a cow grazing in a nearby field. So vivid are their recollections, he said, that they often describe them as if the events happened yesterday.

Witnesses share the trauma they felt six decades ago with Father Desbois and the team with whom he travels in an inconspicuous van. Because of the draining psychological effects of listening to such stories of death and destruction, each trip lasts little more than two weeks. Father Desbois speaks of a growing need for solitude in his personal life, to be “in silent prayer before God.” In Paris, he sets aside at least one day a week for that purpose. “Sometimes I go to a monastery, or else I stay in my apartment, out of reach even of the telephone.” The work is dangerous. In one city, someone shot at him from a window. Now he and his team travel with a bodyguard. “Even at home,” he said, “I never enter my apartment without looking behind me.”

The killings typically took place in or near towns and villages, rather than in the dense forests, because the Germans feared that Soviet partisan fighters hiding among the trees might attack them. At the graves the victims themselves had to dig, and there would be several shooters working in tandem with “pushers,” Father Desbois explained. The German soldiers would line up the naked men, women and children in front of the huge grave sites and shoot them; then pushers would topple them over into the pit. Many were shot in the villages, even in the marketplaces. Their clothes would be taken to a local school and sold to villagers.

So total was the acceptance of “the final solution” that German soldiers often took photographs of individual shootings and sent them to family members as souvenirs. Father Desbois said his researchers had found hundreds of these, some from family members who made them available to his team. During a slideshow and lecture for the student body at Sacred Heart University, sponsored by the university’s Center for Christian-Jewish Understanding and the Anti-Defamation League, Father Desbois showed a photo taken by a German soldier of a mother and child being shot in a field. He described a letter that a German soldier wrote to his girlfriend, saying that it was fun to throw babies into the air and shoot them, because otherwise the babies would grow up to be “our enemies.”

Nor were German soldiers the only ones doing the killing. Father Desbois uncovered what he called “private killings” by Ukrainian civilians. In one village, for example, local families lived in three houses once owned by Jews. Under the German occupation, it became legal for inhabitants to kill Jews on the slightest pretext. Family members occupying these houses today acknowledge what their forebears had done to obtain them. Father Desbois said that by changing a law like the prohibition against killing in a given society, “you change the very nature of that society.”

‘In the Service of Evil’

In the summer of 1942, the mass graves led to bizarre repercussions for the local non-Jewish population. Some residents wrote letters to the German authorities in Berlin complaining of the stench caused by decaying bodies in the nearby graves. Sometimes the bodies were burned in the villages, and the burning human flesh created fumes that forced residents to leave their homes temporarily. Occupying authorities responded to the complaints by burning the bodies farther away from the villages and burying the bodies deeper.

Anti-Jewish hatred extended also to those who were only partly Jewish. One witness told Father Desbois of a Christian mother who was upset that her daughter had married a Jew. He was away in the army, and one day while her daughter was at the local market the grandmother took the couple’s little children to the Gestapo office and said, “shoot them,” which they did. Such an occurrence reflects what Father Desbois calls “limitless imagination in the service of evil.” In his book, this phrase is used to describe the town of Sataniv, where instead of shooting the Jews, the Ukrainian local police forced them to go down into the large storage cellars below the marketplace, then burned straw to smother them. Not all were asphyxiated, however, and there too the ground above moved for days.

The bodies of those people buried alive were not exhumed until 12 years later. “The whole story stunned me,” said Father Desbois. The bodies were removed then only because the marketplace was being renovated. He and his team verified the facts of this and other atrocity stories by consulting archives in various cities, including those at the Holocaust Memorial Museum in Washington, D.C.