Kings and Queens: 'Mary Stuart' and 'Enter the King' 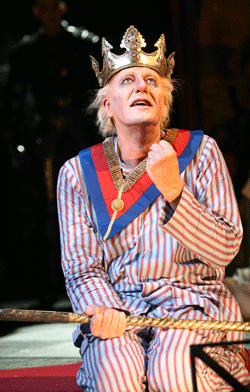 The monarchs had largely left the world stage by the time Eugene Ionesco wrote his wintry music-hall fugue “Exit the King” in 1962. Indeed, a few holdouts notwithstanding, monarchy has settled comfortably into history’s dustbin for some time now. So why do assorted crowned heads keep cropping up in our popular narratives, from children’s fairy tales to Showtime’s shamelessly tawdry “The Tudors”? We can’t blame Shakespeare for all of it.

Two revivals currently on Broadway, including a droll new rendition of Ionesco’s play starring Geoffrey Rush, suggest another answer: Royals not only make handy metaphors for dramatists interested in exploring the limits of human power, a crown can also lend a metaphor a halo of authority, even—perhaps especially—when it’s been conjured to mock the very concept of royal authority. A stage king is a straw man with a scepter.

Of course, a play worth reviving offers more than a staged argument, and the royals in both “Exit the King” and Friedrich Schiller’s “Mary Stuart,” now in a stark, muscular revival imported to Broadway from London’s Donmar Warehouse, are also recognizably human creatures playing out dramas of jealousy, terror, headlong desire and ruthless calculation. But the point of draping these familiar struggles in royal vestments is to make them speak to larger or more general truths.

Schiller was a colleague of Goethe and a follower of Kant, and though he is better known now as a poet and playwright, he had a philosopher’s disinterest—that is to say, though he was the product of Protestant Germany, when he mined Europe’s monarchic and clerical history for drama, he wasn’t out to score points on behalf of Rome, Canterbury or Wittenberg, but rather on behalf of Enlightenment ideals of self-determination, freedom of conscience, the rights of man.

So in the magisterial “Don Carlos,” Schiller cast his lot with the title character’s struggle against King Philip II and the Spanish Inquisition. But in “Mary Stuart,” Schiller portrays the doomed Queen of Scotland in much the way she is popularly revered: as a Catholic martyr speaking truth to chilly English power, as personified by the frigid virgin queen herself, Elizabeth I. In Schiller’s play, Mary may “lose” the staredown with Elizabeth, and her head with it, but she wins the moral victory. She’s Thomas More with cleavage.

But plays are funny things; they can change their colors over the centuries, and even before our eyes. (We likely wouldn’t keep staging “The Merchant of Venice” or “The Taming of the Shrew” if this weren’t true.) In Peter Oswald’s pungent new English adaptation of “Mary Stuart,” an overlay of contemporary parallels subtly congeals over the action: As Elizabeth I (Harriet Walter), in period costume, mulls the fate of her imprisoned cousin Mary (Janet McTeer), she weighs disparate input from a series of advisers in brisk modern-dress that matter-of-factly suggest political debates—over executive privilege and accountability, over the use of fear as a lever of public opinion—of more recent vintage. There is hawkish Lord Burleigh (Nicholas Woodeson), who evokes both Donald Rumsfeld’s bantam brusqueness and Dick Cheney’s sour belligerence; there is the Earl of Shrewsbury (Brian Murray), a seasoned counselor of Tip O’Neillian stature who occupies the always admirable and almost always hopeless position of defending mercy on principle; there is the slippery Earl of Leicester (John Benjamin Hickey, in the show’s breakout performance), who might be any mid-career lawmaker in the make.

For her part, Walter’s steely take on Elizabeth—resolute in public, torn in private—creates a complicated portrait without such simple contemporary parallels. If nothing else, the moral limbo she writhes in feels close to the cloister occupied by Sister Aloysius Beauvier of “Doubt”—another fascinatingly illiberal figure who, for reasons we might sympathize with, nevertheless steadily moves herself out of the range of our sympathies.

That leaves the statuesque McTeer, last seen on Broadway in her Tony-winning turn as Nora in “A Doll’s House,” with relatively easy pickings, and she does not hesitate to tap the role’s heroic registers. McTeer is never less than magnetic, but her diva’s diva performance here—highlighted by a beatific romp in some very wet stage rain—brings to mind the working title of a recent show by another traffic-stopping blonde, Sherie Rene Scott: “You May Now Worship Me.” Such longueurs aside, director Phyllida Lloyd’s production is the sort of crackling theatrical feast that results when a classic recipe gets the fresh, unfussy presentation it deserves.

If Mary’s death is her triumph and Elizabeth’s reign her punishment, Ionesco’s Bérenger I, the fictional monarch of “Exit the King,” faces no such uplifting narrative paradox: He is instead playing out a simple, elemental process of decay and decline after a reign of some 400 years presiding over, apparently, much of Western history. “You’re going to die at the end of the play,” his surly Queen Marguerite (Susan Sarandon) announces to the doddering-like-a-fox Bérenger (Rush, who contributed to director Neil Armfield’s sassy, sharp new translation). Later, the baffled, bullet-headed royal guard (Brian Hutchison) breathlessly lists the king’s achievements: the invention of dynamite, airplanes, trains, telephones, the “qwerty” keyboard; the authoring of “The Iliad” and “The Odyssey,” and even the plays of Shakespeare; splitting the atom.

We may think Ionesco is merely playing at the trappings of a king’s court—here represented by a seedy stage curtain painted with exotic scenes, a simple throne on an undressed platform, some tattered old rugs—the way a child plays dress-up. And as with “Mary Stuart,” there are the inevitable contemporary resonances: Bérenger presides over a crumbling kingdom weighed down by an aging population, heedless hedonism at home, and several “disastrous wars” abroad.

But a portrait of irreversible decline, it turns out, is neither so uniquely contemporary nor a child’s game. Instead, Ionesco is up to something very primal indeed: a ritual dance of death, albeit a drily funny one. As the queen patiently strips her king of expectation, struggle, hope, even of despair, this comic fantasia—given a positively vaudevillian sparkle by Rush and co-stars Andrea Martin, Lauren Ambrose and William Sadler, if not by the lugubrious Sarandon—“Exit the King” approaches existential therapy.

As Marguerite puts it to Bérenger early on: “You are doomed, and you should have thought about it from day one. And then every day after that, five minutes every day. That’s not too much to ask. Five minutes a day. Then ten minutes, quarter of an hour, then half. That’s the way to train yourself.”

Though stripped of their earthly posts, kings and queens clearly still have much to teach us from their thrones on the stage.

Rob Weinert-Kendt is an arts journalist based in Brooklyn who has written for The New York Times and TimeOut New York. He writes the blog "The Wicked Stage."