A Catholic Alternative: What's missing in the debate on education 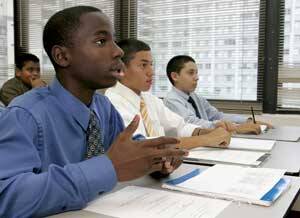 The failure to educate poor minority children has remained an intractable problem, unsolved after almost 40 years of sustained federal efforts, despite the creation of the U.S. Department of Education in 1979. Arne Duncan, President Barack Obama’s choice for education secretary, has a big surprise coming: the problem he inherits is about to get exponentially worse. In short order, President Obama’s education team will be buffeted by three converging forces poised to overwhelm America’s K-12 school system: the swift decline in revenues available to fund public schools; the unsustainable cost of K-12 education as currently delivered; and the economic collapse of the Catholic parochial school system.

Already, the unnecessary and tragic closing of hundreds of inner-city Catholic schools has caused the first crushing waves of pressure to be felt. If this crisis is not addressed soon by more enlightened policies that support faith-based schools as a critical component of our national educational landscape, then hundreds of thousands of students—who previously were educated at little or no cost to the state—will enter public school systems that will be unable to accommodate them.

It is time to invite faith-based schools to be part of the national solution to public education’s woes. What does that mean? At its simplest, it means making sure that faith-based schools are part of the national conversation. At its most complex, it means public support for these schools beyond lip service or mere financial relief, as a genuine and effective alternative for inner-city children who have no access to quality public education.

Defining exactly what “public support” means should be high on Secretary Duncan’s agenda if he has any hope of reversing the deterioration of our educational system. Many of us in faith-based institutions are watching with interest to see whether bodies like the White House Office of Faith-Based and Neighborhood Initiatives will accomplish something or produce only empty talk.

Certainly things need to begin with talk, but that talk needs to set a clear agenda leading to concrete action. So let us get an honest conversation started that includes all the players. And let us also be clear on the daunting financial issues facing public education across the country.

The decline in property and other tax revenues that pay for public education will soon put public schools under enormous budgetary pressure to accept cuts. More money is almost always the proposal to fix public education, but that option is gone for the moment. Instead, brace for announcements like the one almost made in Detroit earlier this year, that large urban school systems cannot make payroll and will have to close their doors.

At the same time, however, the costs involved in delivering K-12 public education continue to skyrocket. In inflation-adjusted dollars, public schools are spending more than 10 times per student what they spent just after World War II. Yet the United States now has math and science scores that are among the worst in the developed world, and fewer than half of black males graduate from high school.

In short, public education is often too expensive and the quality is often unacceptable, while the demand for better outcomes increases. Public education as a whole is not working well, and to help fix it, Secretary Duncan should turn to elements outside the system to give it some muchneeded relief.

For generations, faith-based schools, particularly Catholic schools, have subsidized our inner cities by educating millions of disadvantaged students at no cost to taxpayers. What is more, the Catholic school system has produced responsible, productive citizens that the broader system would have left behind. America’s schoolchildren still need the benefit of this service, but because conditions have changed for the Catholic Church, a new response is required.

The Cristo Rey Network was formed eight years ago to replicate the original Cristo Rey Jesuit High School in Chicago and provide top-quality, Catholic, college preparatory education to economically disadvantaged students in cities across the country. Since its inception in 2001, the network has grown to 22 schools throughout the country and now serves more than 5,000 students, with four more schools planned in the next two years.

The Cristo Rey Network has some lessons for all schools in the United States, but especially for those serving the poor, because it is a direct response to three immediate needs: providing college preparatory education that accelerates student learning; providing proper preparation for students to enter the workplace; and running schools on a sound financial basis.

As a result of an innovative work-study program and college prep educational model, Cristo Rey students graduate and enroll in colleges at rates substantially higher than their peers. This is an important fact, given that students who earn a college degree generally earn higher incomes and have greater opportunities than those without one. The financial return on a college education continues to grow as the economy worsens and good jobs become fewer.

The Cristo Rey corporate work-study model, which ensures building core skills needed to succeed in college and the workplace, is not limited to the classroom. Each student works five days each month in an entry-level clerical job in a professional work environment. Teams of four or five students share a full-time job. The objective of these jobs is to reinforce the capabilities—reading comprehension, mathematics, discipline, a strong work ethic—that students need to be successful in college and career, as well as to provide students with new opportunities for growth often lacking elsewhere in their lives.

It is essential to note that the money Cristo Rey students earn from their jobs covers most of their school’s operating costs. The remainder is covered by modest tuition payments and similarly modest fundraising campaigns. Since money is hard to come by in a struggling economy, Secretary Duncan should consider the Cristo Rey solution as an innovative model that could help sustain America’s educational system as a whole. But public schools will not learn how to adapt this model—or other successful models created by faith-based schools—unless faith-based schools are at the table.

Faith-based schools are only a part of the solution, but as they grow stronger and make this kind of education available to more children in need, they solve a significant portion of the overall problem that many other schools have failed to address. Together, we can fix education at a cost America can afford.

This article recognizes the seriousness of the financial difficulties of Catholic schools generally, but focuses chiefly on the small community of Christo Re schools. Little attention is given to what I submit is a much larger missing element – a focus on parental rights and on ways of providing equitable financial assistance to parents, especially through such means as federal tax credits and especially vouchers. Lacking that assistance, and in the absence of organized advocacy, Catholic schools by the dozens, even hundreds are being forced to close every year because parents cannot meet the cost. The closing of those schools also creates an increased financial burden for cities and states, and the loss of large numbers of successful schools. We are facing a true crisis, but the silence is deafening.

New, creative schools like the Christo Re schools are indeed a promising development. However, the more urgent need is to provide substantial help to all parents, including those in the Christ Re schools. Surely that should be a central element in the public debate. Passage of such legislation would achieve a major element of justice and honor in practice of one of our most basic principles – the priority of parental rights in education.

Hopefully, the Catholic school community will join with others in organized efforts to meet that urgent need.