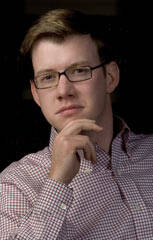 I was tempted to use this space to proclaim Feb. 23 America’s official Oscar issue, in honor of the Academy Awards ceremony held on Sunday the 22nd and our newly expanded film coverage (see pg. 31). Then I remembered that our issue of Feb. 23 is our Lenten issue, and few things are as incongruous as these 40 days of penance and Hollywood’s red-carpet indulgences.

The connection between faith and film often does seem tenuous. The late John Updike once observed that the decline in church attendance in America mirrored the growth and popularity of the movie business. Weekend afternoons spent watching lights play on a scrim provided a spectacle that even the highest of liturgies could not match.

Yet it would be a mistake to label the movies a purely secular enterprise, as I am sure Mr. Updike would have agreed. Yes, much at the multiplex is fatuous and trivial, but occasionally film’s unique alchemy of light and sound provides a spiritual experience that is simply unavailable elsewhere. Many examples can be cited, among them the excellent “Into Great Silence,” a 2007 documentary about the Carthusian Grand Chartreuse monastery in France. Another is “Silent Light,” or “Stellet Licht” (2008), by the Mexican director Carlos Reygadas, a film whose journey from darkness to light is well suited to Lent.

Set in Mexico, the film chronicles the consequences of marital infidelity in one Mennonite community. Shot on location with Mennonite actors, many of whom had never acted before, “Silent Light” employs a rare German dialect and long tracking shots that can test the patience of even the most courageous cinéastes. If in outline “Light” strikes you as pretentious, a parody of an art house film, I would concede the point, and then urge you to see it anyway.

The viewer’s first test comes with the opening sequence, in which the director uses time-lapse photography to capture a Mexican countryside just as the sun begins its ascent. The gradual transition from night until morning, compressed to five minutes in the film, hints at what is to come. We are introduced to Johan and Esther, a traditional Mennonite couple, and their six children. Yet while the children seem innocent and cheerful, their parents’ faces are marked with a sadness that verges on despair.

Soon we learn that Johan has fallen in love with another woman, who he believes may be his natural partner, the one God intended for him. His predicament causes him no small amount of spiritual pain, as he loves his wife and loathes the prospect of leaving her and his children and giving scandal to the community. Yet he cannot resist the centripetal force that pulls him to Marianne, a rather plain woman who also recognizes the misery she is bringing to “poor Esther.”

I will not give away anything more here; but in a film as artful as this, attention must be paid to even the smallest of moments. The first: a shot of Johan and a longtime friend, resting on the back of a pickup truck, the sky radiant in the distance. The composition is exquisite, reminiscent of Andrew Wyeth or Edward Hopper. A second image: Marianne, caught at the point of sexual ecstasy, evinces a bliss that is mixed with a profound spiritual desolation.

In an age of computer generated imagery and IMAX technology, it has become a cliché to call a film miraculous, but in the case of “Silent Light” the adjective is unusually apt. The trio at the heart of the film, Johan, Esther and Marianne, find themselves at the mercy of the fates, and it is only to God that they can look for their deliverance.