The Fallout: What Bush did, and what Obama can do, to face an arms buildup on the subcontinent 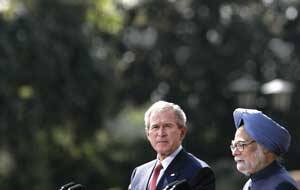 Perhaps the most blatant example of former President George W. Bush’s disregard for the effort to prevent the spread of nuclear weapons is an agreement he signed with India in July 2005 and that Congress ultimately approved on Oct. 1, 2008. The agreement, now called the U.S.-India Nuclear Cooperation Approval and Non-proliferation Enhancement Act, allows the United States to sell India civilian nuclear technology despite the fact that India, which became a nuclear weapon state in 1974, has never signed the Nuclear Nonproliferation Treaty.

In addition, the N.P.T. requires the nuclear powers to provide assistance to the nonweapon parties, but only for the production of civilian nuclear energy. To ensure that this assistance is not diverted to military use, the treaty requires recipient states to open their nuclear facilities to inspection by the International Atomic Energy Agency.

In light of the alarming vulnerability of the Indian state on display in Mumbai, and the ever-worsening relations between India and Pakistan, the campaign to prevent the buildup of nuclear arms in India takes on renewed urgency. Though economic conditions at home have been the focus of President Barack Obama’s first days in office, ensuring that India does not use nuclear technology for military purposes must also be a top priority.

India first received nuclear assistance from the United States and Canada before the N.P.T. came into force in 1970. Although India had opened its nuclear facilities to inspection by the I.A.E.A., some of the nuclear assistance they received under the U.S. Atoms for Peace program was diverted to clandestine military installations. There it was used to produce nuclear weapons, the first of which was tested in 1974 under the guise of a “peaceful nuclear explosion.”

In response to India’s subterfuge, in 1978 Congress enacted the Nuclear Non-Proliferation Act, which bars the United States from providing nuclear technology to countries that have not signed the N.P.T. By approving the U.S.-India nuclear agreement last October, Congress exempted India from this act. In return, India once again agreed to open its civilian nuclear facilities to inspection by the I.A.E.A, but not its eight military nuclear plants.

After Congress passed the 2008 agreement, President Bush promised that it would “strengthen our global nuclear nonproliferation efforts, protect the environment, create jobs and assist India in meeting its growing energy needs in a responsible manner.” Needless to say, the deal also would open up the energy-hungry Indian market to U.S. nuclear technology sales.

Supporters of the deal, which included then-Senator Barack Obama, predicted that it also would strengthen U.S. ties with a country that has long kept its distance from Washington, thereby offsetting China’s dominance in Asia. The Bush administration also viewed India as a potential U.S. ally against Islamic militants in Pakistan and Afghanistan.

While the arrangement may or may not strengthen the U.S.-India relationship in the long term, it certainly risked further undermining the international effort to contain the spread of nuclear weapons. By approving the nuclear agreement with India, Congress has rewarded a country that once used U.S. nuclear technology provided for strictly civilian energy production to build nuclear weapons. And India has made the same promise again.

The message the agreement sends the world, said Senator Byron L. Dorgan, Democrat of North Dakota, is this: “You can misuse American nuclear technology and secretly develop nuclear weapons, you can build a nuclear arsenal in defiance of the United Nations resolutions, and you will be welcomed as someone exhibiting good behavior with an agreement with the United States of America.... What message does that send to others who want to join the nuclear club?”

Iran is working diligently to become a nuclear power. Not surprisingly, the Iranians see the U.S.-India deal as a diplomatic boon, expecting that it will help them gain international approval for their own nuclear program, which many believe includes the development of a nuclear arsenal.

Israel is still another non-N.P.T. nuclear weapon state that expects to profit from the U.S.-India agreement. The Israelis argue that the deal establishes a precedent for the lifting of nuclear trade restrictions imposed on their country by the Nuclear Suppliers Group, which regulates international nuclear trade. In September, buckling under pressure from the United States and other countries eager to sell India nuclear materials, the group voted to lift its restrictions on nuclear trade with that country.

Some fear that eventually Russia and China will also use the U.S.-India agreement to justify their own sales of nuclear technology to non-N.P.T. weapon states, like Pakistan and North Korea.

In short, the Bush administration punched a hole in the international nuclear nonproliferation dike by concluding the nuclear-trade deal with India. It is a hole that threatens to undermine the whole nonproliferation structure.

There is still another way the U.S.-India agreement threatens to undermine the international nuclear nonproliferation effort. Although India has promised that U.S. assistance to its civilian nuclear energy program will not benefit its nuclear weapons program, some experts believe that India could use imported nuclear fuel for its civilian reactors, thereby freeing its own domestic nuclear fuel supplies to build more nuclear weapons.

To repeat, this would not be the first time that India broke a promise to the international community concerning its nuclear activities. For years, India claimed it was using nuclear technology for civilian purposes, right up until its first nuclear weapons test in 1974. Needless to say, Pakistan and China would probably not sit by idly while India augments its nuclear arsenal. The U.S.-India agreement threatens to ignite a new and dangerous nuclear arms race in eastern Asia.

David Albright, president of the Institute for Science and International Security, is among several nonproliferation experts who insist that additional measures are required to ensure that a real barrier exists between India’s military and civilian nuclear programs. Without them, Albright believes, the agreement “could pose serious risks to the security of the United States.”

One way to fix the U.S.-India nuclear deal would be to tighten the terms of the agreement that India concluded with the Nuclear Suppliers Group in September. Among the measures that have been recommended is an N.S.G. resolution stating that nuclear exports to India will be cut off automatically if the Indians again test a nuclear weapon. Another suggested measure would ban the transfer to India of sensitive nuclear technologies that can be used in the manufacture of nuclear weapons.

Whether or not these other measures are enacted, however, will depend to a great extent on the attitude of the new U.S. administration. Fortunately, President Obama appears to be committed to ridding the world of nuclear weapons, a commitment he personally expressed to India’s Prime Minister, Manmohan Singh, in a letter on Sept. 23, 2008. In fact, as a senator, Obama was responsible for adding an amendment to the U.S.-India agreement requiring India’s supply of nuclear fuel to be maintained at a level “commensurate with reasonable operating requirements.” The Obama amendment, in effect, would prevent India from stockpiling enough nuclear fuel to undercut a U.S. threat to re-impose sanctions if India violates any of the conditions of their agreement.

Nevertheless, the challenge a nuclear India poses for President Obama will be resolved only by bringing India fully into the nuclear nonproliferation regime. This task could be accomplished by persuading India to sign not only the Nuclear Nonproliferation Treaty but also the Comprehensive (Nuclear) Test Ban Treaty, as well as a yet-to-be completed international agreement cutting off the production of fissile materials—primarily plutonium-239 and, secondarily, uranium-235—for nuclear weapons.

First, Obama will have to convince the Indians that the United States is serious about ending its own reliance on nuclear weapons, which the United States and the other weapon states promised to do when they ratified the N.P.T. One way he could display U.S. sincerity in this regard would be to resume strategic arms reduction talks with Russia, a step he promised to take.

Another way Obama could demonstrate his commitment to nuclear disarmament would be to persuade the Senate to approve the Comprehensive Test Ban Treaty, which President Bill Clinton signed in 1996 but a Republican-controlled Senate refused to approve three years later. In addition, if there is to be a fissile material cutoff treaty, the United States will have to take the lead in bringing it about.

Obviously, it will be difficult, if not impossible, to bring India fully into the international nonproliferation regime if the United States continues to be irresolute about ending its own reliance on nuclear weapons. Yet if President Obama is as serious about ridding the world of nuclear weapons as he appears to be, he will have to tackle the U.S. nuclear weapons complex before he challenges India’s.

Ronald E. Powaski is a semi-retired adjunct professor of history at Cleveland State University. His book

Show Comments (
1
)
Comments are automatically closed two weeks after an article's initial publication. See our comments policy for more.
13 years 11 months ago
I cannot disagree more strongly with Mr. Powaski. President George W. Bush used the Nuclear Treaty with India to solidify diplomatic relations with the largest democracy on Earth. Nuclear technology and scientists are readily available from China, North Korea, France, and Russia. The US/India treaty keeps India squarely in the free world, where cheating and secrecy are harder to maintain. As one of the largest growing economies, India needs a reliable source of energy, Coal and Oil add dangerous greenhouse gases to our planet's ecosystem. "Renewable" biofuels, recently promoted by some, actually raises the price of grains and foodstuffs. Using food as fuel dooms the third world to painful death by starvation, a form of selfish gluttony that should be considered a mortal sin. The US-India Treaty brought India into the free world and away from the temptations of the other nuclear powers.