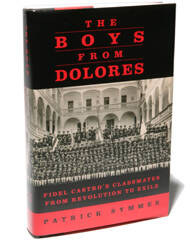 Patrick Symmes, the author of The Boys from Dolores, is a talented wordsmith. The reader can almost smell the dust that springs up from the streets of Santiago as he describes small boys wending their way to the Jesuits Colegio de Dolores in the early 1940s. One also senses the dust of memories being wiped away by the gnarled hands of former students as they stare at a copy of a 1941 photo of 238 students, including Fidel Castro and his brothers Ramón and Raúl. The memories that the photo evokes is the touchstone of this bookthe talisman of a time and place before the students were sent on journeyssome into power, others into exile and regret.

The Boys of Dolores recounts the stories of some of the students included in that photo as they took power in Cuba or went into exile, as many did. A private school for boys run by Spanish Jesuits, Dolores emphasized developing rigorous analytical skills and intellectual and personal discipline, in the context of a curriculum that emphasized both the classics and new scientific developments. The school attracted boys from middle and upper class families who wanted their sons to have the best education available. Fidel Castro was reportedly an apt student and, as he remarked in an interview with the Brazilian theologian Frei Betto many years later, he thought the school was truly superior. According to Symmes, the Jesuits emphasized the need to choose between two standardsgood or evil, Christ or Satan. Such a stark binary approach does not sound very Jesuitical, and one wonders to what degree later events may have influenced the memories of Symmes informants.

In short, The Boys from Dolores is a story of the vagaries of memory, the deeply rooted internal conflicts that have shaped Cuba both past and present, and the experience of exile, both geographical and pyschological.

As Symmes plumbs the memories of the former students he concludes that Memory was writing Cuban history now, the curious retrospective prediction ordered all understanding, even as the events occurredperhaps even before they occurred. The human need for agency, for patterns, gave purpose and shape to the chain of events. People needed a guide, augury in a voice that crystallized the new truths, explaining that things had gone bad, permanently wrong, at just one particular moment. And that moment was usually the one in which each recollecter had made the decision. It was the decision to leave that brought with it the knowledge that all was finished, every hope over. Hindsight is twenty Cubans talking about the Revolution.

While Symmes is frequently insightful, the complexities of Cuba and Cubans sometimes disappear in clever turns of phrase. When retelling and analyzing memories he focuses on moments and mementos rather than on processes. As the above quote indicates, he does not always capture the agonizing process of deciding to go into exile so sensitively described by Edmundo Desnoes in the novel Memories of Underdevelopment. He also tends to reduce long-standing internal conflicts in Cuba to binary oppositeswhites versus blacks, rich versus poor, Catholicism versus Santería. None accurately reflect the incredibly complex nature of Cuban history or of cubanidad.

Symmes does, however, capture very well the sense of being unmoored that exile brings, as well as the temporal confusion. In focusing primarily on the stories of a half dozen exiles, he maps out the process, as he phrases it, of the exiles filling their empty pockets with new things. That is, they built lives, while retaining a deep nostalgia for the old. Symmes subjects struggle to explain to himand to themselveswhat happened to them and to Cuba. For some it was the malevolence of Fidel, but for others the profound socioeconomic inequalities and corruption and abuse in the Cuban government that precipitated the revolution, which they wished had evolved differently. For those students who remained in Cuba there is also a sense of loss of the future they had imagined while at Dolores. Particularly touching is the description of an elderly graduate still living in Santiago who helps other former students in need by collecting food and clothing.

What does this book say about the formation of Fidel Castro as a youth? Symmes suggests that while he exhibited some leadership capacities, he did not appear to be entirely at home at Dolores. While Castros family was wealthy, the author implies that their inferior social status made Fidel sensitive to class differences and inclined to champion the underdog. At the same time, his ego led him to sometimes act like a bully. The vignettes are too few to draw any substantive conclusions and, of course, Symmes sources are predominantly those who view todays Cuba from exile. In that he reaffirms his sense that memory continues to write Cuban history in substantial ways.

Nelson, what do you think?

As you say, The Boys from Dolores revolves around a photo. Unfortunately, the photo is a prop, the only thing that is truly unique in the work. The book attempts to be a collective portrait of Fidel Castros classmates. However, it is not a historical account, nor a biography of different persons. It does not rely on school archives, nor newspapers from the period covered. It has no footnotes or references. Even books that have been written about Fidel Castros childhood are not acknowledged.

The authors main source was Luis Aguilar Leon, who had taught at a number of U.S. universities and left Cuba in 1960. Lundy, as the author refers to him, had Alzheimers when the author spoke with him. Others refer to a few incidents as they remember them. Some of the persons visited attended the same school as Fidel Castro in the late 1930s up to 1941; but others who were interviewed entered the school after Castro graduated.

Cuban history, as a rule, is interpreted in generational terms. It stands to reason that studying a particular cohort could offer scholars and the general public some knowledge of the common experience of young boys from powerful and influential families from Cubas second main city. But there is no sociology here. No theory. There is nothing made available to corroborate, just assertions from the author and his sources.

What made the "boys" from Dolores important to the author is just one student: Fidel Castro. But if Fidel is the centerpiece driving the logic of the work, why select Colegio de Dolores and not La Salle (to which Fidel Castro went before entering Dolores) or Belen in Havana (where Fidel completed high school)? Why not write about Fidels university peers in Havana? The question is not addressed. The one photo determined the subject.

Fidel was a regular non-boarding student when he entered Dolores. He matriculated in order to finish the fifth grade. He started school on January 11, 1938 (Symmes does not provide the date.) He was registered by his sister as Fidel Casiano Ruz Gonzalez. (At the the time his father had not yet married Fidels mother.) Fidel lived with a couple in Santiago de Cuba, away from his parents. Fidels parents lived in the countryside with no elite school nearby. The couple was paid by the Castro family, who lived on the other side of the province. Fidel entered the Dolores school 4 months into the term. He was 11 years old. In order to catch up he had a female private tutor (Emiliana Danger, a Haitian intellectual). Fidel lived in the Santiago private home for almost a year. He became a boarding school student in January 1939. By age 13 he was in the seventh grade. On May 15, 1940 he entered the Instituto de Segunda Enseñanza while still going to Dolores. This was done in order to collapse a whole year of studies into one summer. By September 1940 Fidel started high school at Dolores.

Symmes does not present this information; he merely tells his readers that Fidel Castro has said little about his years at Dolores. But Symmes makes many errors. Click here for a list of others. The grand prize, however, is the following: Desiderio Arnaz [of I Love Lucy] invented the conga line, in Florida of all places! Page 73 reads, On New Years Eve, desperate to entertain a bored crowd, Desiderio grabbed a conga drum and began parading through the tables, imitating the rhythmic marching at Santiago carnival. Urging people to follow him around the room, Desiderio invented the conga line, which became a national dance craze. Wrong. The conga line was developed around by 1757 if not earlier. (See: Nancy Pérez Rodriguez, El carnaval santiaguero, Vol. 1 and 2, Editorial Oriente, 1988.)

Furthermore, Symmes gives us no clear idea of the Dolores school and its importance in the city. Nor does he mention some of its influential graduates. For example, José Antonio Portuondo, who taught at several U.S. universities and received a Guggenheim Fellowship is not mentioned. Portuondo had been a recognized scholar on the works of Marti and a historian of Cuban literature. He, interestingly enough, served the Cuban revolution in a number of very prominent positions, including working at the Cuban embassy in Mexico City.

The complexities of Cuban society, economy, politics, culture and history are certainly lost. Yet, this work has received praise from numerous mainstream American reviewers. Why? That deserves further discussion.

Read Part 2 of this discussion.

Nelson P. Valdes
Show Comments (
2
)
Comments are automatically closed two weeks after an article's initial publication. See our comments policy for more.
15 years ago
What a shame that really accurate, historic work like that of Professor Valdes isn't disseminated more widely! People outside of Cuba (and even some inside) could have a far better understanding of what goes on there if it were.
15 years ago
Kudos Nelson, for not falling to the pandering of big time reviews and high brow reviewers who serve purposes other than the readers. Suerte che!!