Woman of Peace: The radical witness of Anne Montgomery

Woman of Peace: The radical witness of Anne Montgomery 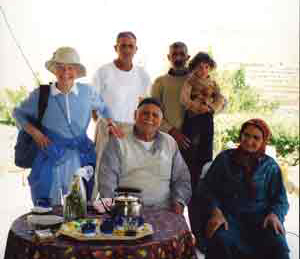 Whatever you do, do quickly.” Spoken two decades ago, these words of Anne Montgomery’s provincial superior to her were both a sign of support and an acknowledgment of advancing age. Now 80 years old, 60 of them lived as a member of the Religious of the Sacred Heart, Sister Montgomery has traveled to some of the most violence-ridden parts of the world as a witness to Gospel nonviolence: Iraq, Israel (Hebron), Croatia (Sarajevo) and even Cuba, where in December 2005 she took part in a Witness Against Torture group that made a pilgrimage to Guantánamo to protest the treatment of the prisoners there. During a visit to America House, Mont-gomery spoke of her beliefs as a peace activist. “We’re meant to be in places of conflict,” she said. The “we” refers to her role as a member of Christian Peacemaker Teams and to her participation in half a dozen Plowshares actions.

Yet this octogenarian of slight build began her life as a nun by teaching at Sacred Heart schools. It was only after age 50 that Montgomery began to respond actively to the contrast between the huge sums spent on weapons and the scant resources devoted to assisting poor people. Working with dropouts at a street academy in Albany, N.Y., she saw the connection clearly. But before that, while tutoring in the Spanish Harlem section of New York City and teaching at one of her congregation’s schools, she had sensed it. She came to a turning point in 1977, when she heard the Jesuit peace activist Daniel Berrigan speak at a prayer gathering. “He challenged us to become active,” she said. His admonition led her to take part in her first act of civil resistance during the United Nations session on nuclear disarmament.

The introduction to antiwar, peaceful civil disobedience, which involved no court trials, led to her leafleting in front of the Riverside Research Institute, an organization with ties to arms manufacturers. But as she became more involved in the peace movement, Mont-gomery received an invitation to take part in what she termed a more risky action at a General Electric plant in Pennsylvania that was making parts for nuclear warheads. Other peace activists already engaged in keeping a vigil there had noticed the plant’s low level of security. When asked if she would be interested in the action being planned, she replied that she “would think about it.” Months later, at a faith and justice retreat, Daniel Berrigan’s brother Phil raised the question again. During her retreat in the summer of 1980, Mont-gomery “made an act of faith,” she explained; “[I said] to myself that if I ever got my hands on part of a nuclear weapon, the only thing to do would be to try to dismantle it.”

During a final gathering before the action, the group settled on its name, Plowshares—based on the Scripture verse, “they shall beat their swords into plowshares” (Isa 2:4). The phrase became the spiritual core not only of that action, but of subsequent actions at other sites in the years that followed. Each was a symbolic undertaking, Montgomery observed, and once it has occurred, “you pray and simply wait to be found and arrested.” The quiet waiting to be discovered by security officers shows the group’s desire, she said, to take personal responsibility for their actions. The initial action in Pennsylvania took place as the workers’ shifts were changing, which allowed the group to enter a testing room without seeming in any way threatening. In many Plowshares actions, she observed, “You feel the doors in the facility somehow swing open and you go in. It’s amazing,” she added, implying that faith in God’s providence played a role. Her participation in such actions has led to several years behind bars.

In 1990, when sanctions were imposed on Iraq, Montgomery heard about an international peace team preparing to travel there. “We all knew that war was coming and that the United States would go ahead with it no matter what,” Montgomery said. She was invited to become part of the Gulf Peace Team, whose purpose was to serve as “a nonviolent presence between two armies” on the border of Saudi Arabia and Iraq. The team arrived in Baghdad on the feast of the Epiphany, and since some members wanted to attend Mass, their Iraqi “minder” took them to a nearby Catholic church. Prayer and the sacraments have always been a central part of Montgomery’s witnessing to peace efforts. “Then we traveled to a point within two kilometers of the Saudi border,” she said, “where the Iraqi government lent us a neutral camping space that had once been a stopping place on the road to Mecca.” The team itself was composed of people from all over the world, including two Japanese.

Ten days later, when they heard bombers flying overhead during the night, “we raced outside our tents with blankets wrapped around us: we knew the war had begun.” At that point, food was running low and the Iraqi border guards themselves were reduced to boiling grass. After another 10 days, the group was bussed back into Baghdad and lodged in a hotel with other internationals. “There was no electricity, so we had to crawl up the stairs in the dark,” Montgomery said. The bombs fell close by and nightly trips to the basement were a matter of course when the air raid sirens sounded. After a few days, they were taken into Jordan, where Montgomery remained for a week before returning to New York.

What did she discover through this initial trip to Iraq, a war-afflicted nation to which she has since returned many times? The experience, she explained, taught her that supporting nonviolent peace teams abroad was like the flip side of the coin to the Plowshares actions in the United States. Here, she observed, “you enflesh Isaiah’s call to disarm, which I believe is our responsibility as Americans.” The experiences in Iraq, on the other hand, taught her “how much it meant to the Iraqi people for us to be with them at the other end of the guns,” she said, noting that ordinary Iraqis sometimes told her that they valued the presence of Westerners “who cared about the Iraqi people and who didn’t want the war.” Earlier, she had joined the Christian Peace Maker team in Hebron on the West Bank and spent a number of years working with them there. At that time she visited Iraq often to work against the embargo that, she said, had resulted in the death of many children because of the lack of medical and other essential supplies.

In May 2003, after the second Persian Gulf war, Montgomery joined the Christian Peacemaker Team in Baghdad, which focused on helping families find where their relatives were being held in American coalition detention camps. A group of Muslims approached the team and requested training help for a Muslim peace team. Some Muslims had already begun on their own to initiate nonviolent actions in their work for reconciliation. Some were women, who said, “This is the first time we women have been able to take leadership in this kind of undertaking.” The relationship with Muslim peace activists has continued for years.

Montgomery had the support of her provincial superior when she first began peace activities that could and did result in arrest. But what about the rest of the sisters in her congregation? “They were shocked after the first Plowshares action at the General Electric plant,” she answered, “so I was asked to prepare a message for them explaining why I had taken part in it, knowing that jail time would be inevitable.” The response of the other sisters in her congregation was—and has continued to be—very supportive.

Through decades of peace work, prayer remains a constant source of strength for Montgomery. Although her preferred form is zen-style meditation, she has adapted easily to the prayer styles used by the teams in Palestine and Iraq. The Christian Peacemaker Team, she said, includes people from several denominations (Mennonite, Quaker, other Protestant groups and Catholics), representing a variety of perspectives. “But we always gathered for prayer in the morning, with one or another of the group arranging it,” Montgomery said. For the thousands of miles Montgomery has traveled over decades in her witness for peace, she observed that the journey primarily has been inward. Visiting places of conflict and oppression, she said, “has taken me more deeply into the reality of how God is present in the world, which helps us to hope in the midst of all the suffering. The most we can do,” she added, “is to say, ‘we are here,’ and try to share our hope.”

Show Comments (
1
)
Comments are automatically closed two weeks after an article's initial publication. See our comments policy for more.
ANN JOHNSON
12 years 6 months ago
The fact-checker must have been asleep - if Sr. Montgomery visited Sarajevo, she was in BOSNIA, not Croatia.
Advertisement

This article also appeared in print, under the headline “Woman of Peace,” in the September 10, 2007, issue.