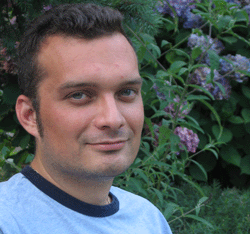 In the July 30-August 6 edition of America, Vincent Gragnani writes about the new, lay face of missionaries. As the number of priests and religious ministry around the globe declines, he writes, lay people are helping to fill the gap. Mr. Gragnani is a graduate of the University of California at San Diego and a former staff writer at the Southern Cross, the diocesan newspaper of the diocese of San Diego. In addition to publishing in America, he has written for St. Anthony Messenger, One and U.S. Catholic. Mr. Gragnani agreed to discuss his article by email.

How many lay missionaries are working today?
10,000, according to the Catholic Network of Volunteer Services. But that figure includes lay Catholics in short-term (less than a year) programs, and U.S. Catholics doing work within the United States. The actual number of lay missioners serving overseas is probably more like 1,000.

What is life like for families who choose to be missionaries?
My experience is that these families live simple lives and are integrated into the communities they serve. The children go to local schools, the families are active members of the local parish, etc. Many lay missionaries I spoke to trace their calling to a childhood or teenage volunteer experience, which leads me to imagine that American children being raised in the mission world will be inspired to some kind of service in the future.

According to a Vatican document you quote, The proper purpose of this missionary activity is evangelization? Do lay missionaries see themselves as evangelizers of the faith?
Absolutely. If they didnt, I think they would look for service opportunities outside the Catholic Church. But we need to keep in mind that evangelization is more subtle than it was 300 years ago. As I say in my article, were not talking about planting crosses and claiming a land and its population for Rome. Were talking about spreading the Good News, and that is done in a variety of ways.

Pope John Paul II said in Redemptoris Missio, The First Form of Evangelization Is Witness ... The first form of witness is the very life of the missionary, of the Christian family, and of the ecclesial community, which reveal a new way of living. The missionary who, despite all his or her human limitations and defects, lives a simple life, taking Christ as the model, is a sign of God and of transcendent realities. But everyone in the Church, striving to imitate the Divine Master, can and must bear this kind of witness; in many cases it is the only possible way of being a missionary.

It seems unlikely that lay missionaries will be able to match the work done by priests and religious. What does that mean for the future of the churchs missions?
I would not compare missionary efforts today with those of the past, when European missionaries were bolstered by powerful political and military organizations and fueled with an urgency to baptize every non-Christian. The global situation has changed as has our understanding of evangelization.

In those parts of the world where missionaries are serving a non-Christian population, a lay nurse ministering to babies with AIDS may have more to offer than a priest whose principal ministry is sacramental. Often priests are there to do the same work as lay missionaries. They will offer sacramental ministry to the lay missionaries, but not to a non-Catholic population.

In Latin America, where the established church is losing members to Protestant groups and there is a significant priest shortage, lay people are doing their best to facilitate parish life. But lay missionaries are not setting out to match or replace priests any more than lay ministers in the United States are. Evangelization is the work of the entire church, not just priests and religious. Lay people are called to ministry, and that is what we are seeing around the world.

You note that, in some dioceses, little has been done to promote lay missionary activity. Why do you think that is?
Unfortunately promoting awareness of lay missionary activity is not a priority in most dioceses. Mission office directorsmany of whom also have parishes to runare hired primarily to facilitate the work of the Pontifical Mission Societies. Meanwhile the diocese has many other internal issues to deal with, such as priest shortages, construction projects and/or legal troubles. In my experience religious communities have taken a greater lead in this area.

Most Catholics simply are not aware of the struggles that lay missionary groups face, and their potential for doing good work. Thats one of the reasons I wrote this article. I hope that once Catholics are more educated about lay missionary work, they will support these groups just as they support other Catholic and nonprofit endeavors.

Also, if youre interested in working to promote the work of these groups, talk to your pastor or the director of your diocesan mission office. I am sure they can use the help.

This article also appeared in print, under the headline “Six Questions for Vincent Gragnani,” in the July 30, 2007, issue.