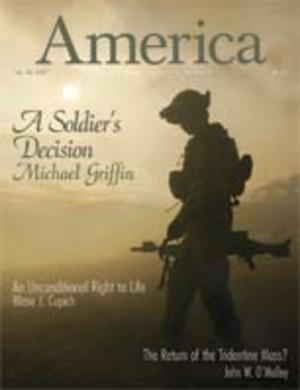 You must be logged in to view the Digital Edition.
If you are a subscriber, please log in to conitnue.

The so-called Tridentine liturgy is once again in the news, with Italian newspapers reporting rumors about a forthcoming papal indult that would loosen limits on the practice. Although as “Tridentine” the liturgy bears the name of the Council of Trent, it is only indirectly related to th

Since the war in Iraq began, we at the Catholic Peace Fellowship have heard from more than 1,000 soldiers. And wea group that supports conscientious objectors through education, counseling and advocacyhandle just 6 percent of the calls on the national GI Rights Hotline. In answering the phone each d

Nowadays when I read of Albania in the media, it is often in reference to Albanians who—desperate to escape their poverty-stricken country, where they are also beset by ethnic conflict—flee in rickety boats across the Adriatic Sea toward Italy. If they have not drowned or been intercepte

Pope John Paul II stated quite clearly his view of a Christian’s attitude toward this planet on which we livea moral matter, as I recall. I long wondered whether his message was being announced among the faithful, although several bishops’ groups have written

Editorials
All the President's Men
The EditorsJanuary 29, 2007

Many nursery rhymes began as coded verse that once circulated among the dissenting populace under autocratic rulers. A number of famous verses date to the Tudor monarchy. Mary, Mary, Quite Contrary satirizes Mary Tudor (Bloody Mary), her garden a veiled reference to the graveyards where Protestant m

In 2007, Cardinal Blase J. Cupich, at the time bishop of Rapid City asked: Is the right to life conditional, or is it unconditional? Can men and women forfeit their right to life by their behavior, or is that right irrevocably given by God?