After the Tsunami, Peace

There is definitely a “peace dividend” to disaster relief, as I found in mid-December during my second visit to Banda Aceh, the large city in northern Sumatra (Indonesia) where over 118,000 lives were lost on Dec. 26, 2004. That was the day of the multiple catastrophes of a huge earthquake (8.9 on the Richter scale) and three successive tsunami waves. Another 100,000 people are still unaccounted for and presumed dead. All of this in a city that once numbered half a million people.

When I first visited in March 2005, everywhere I looked I saw signs of that dreadful day the preceding December. The look on the faces of the people, especially the children, still reflected dread and terror as well as uncertainty about their future.

Three months had passed since the disaster, but little seemed to be happening in terms of hands-on relief. The Acehnese knew that the world had promised close to $7 billion in relief aid. Each night, however, found many in displaced persons camps with no income, scant hope of obtaining housing anytime soon and the uneasy reality of a civil war that seemed to be experiencing only a tsunami-inspired cease-fire. There was little vitality in this once bustling city, and with sunset each day came fear and further uncertainty.

The process of rebuilding had begun, though. Efforts to find and bury the bodies were largely complete, and the task of cleaning the streets and a few of the public places had provided employment for some of the able-bodied. The feared disease and hunger never materialized, thanks to the swift action of many. But there were still no replacement houses springing up, and there was always the fear that one side or the other of the combatants—the armed forces of Indonesia or the rebels from the nearby mountains—would soon start shooting again.

Much has changed in the intervening nine months. On my second visit, as chairman of Catholic Relief Services, I found new hope everywhere and a more certain and brighter future.

During the past summer in Helsinki, for example, the government of Indonesia signed a peace accord with the representatives of the Acehnese rebels. The government promised to remove the majority of its military forces from the area, and the rebels promised to hand over their weapons. So far both have kept their word, and with the first anniversary of the tsunami, the previously elusive peace seems in place.

The Acehnese located in the northernmost part of Sumatra, which is itself the northernmost island in Indonesia’s vast archipelago, have never liked being governed from Jakarta. The independence movement goes back to before the Dutch occupation in the 1800’s. When the Dutch left and Indonesia itself became independent, Aceh Province wanted to be its own nation, free from Jakarta. Some of the other island populations desire the same independence, so the Jakarta government has long been aware that the rest of Indonesia was watching what it did in Aceh Province. It took courage for the two sides to lay down their arms, and the decision seems to have been a positive effect of the tsunami.

For the local population, much is changing. It has taken a long time for replacement housing to be created. Close to 100,000 houses must be built in the tsunami-affected region. One cause of delay is the lack of titles to land, in some cases because documents were never filed in the first place and in others because they were washed away by the floodwaters. Nongovernmental agencies like C.R.S. have had to wait for the government to assign areas of responsibility for construction and to settle disputes between previous homeowners, but slowly and surely replacement housing is going up. C.R.S. has dedicated $127 million of its tsunami collection, in fact, to this area alone (the other money is targeted for Sri Lanka and India), and most of it will go to replacement housing.

Each new house constructed by C.R.S. to its own standards for earthquake resistance costs about $7,500 for 45 square meters of living area. Each will have running water and sanitation systems—not available in many of the homes that will be replaced. Carefully, slowly, thoughtfully and in consultation and collaboration with the people of each community, dwellings are assigned to those who meet the following criteria: they were living in their own home on the morning of Dec. 26; their home was totally destroyed that morning; and they can prove both. At the moment, C.R.S. is committed to creating approximately 5,700 new permanent homes, and an almost equal number of temporary homes for those in the camps who will not be able to be in their permanent residences by Dec. 31, 2006. Getting the population out of the camps as soon as possible is the highest priority.

C.R.S. also builds replacement mosques in communities that had them prior to the tidal waves and the earthquake. It is a part of a holistic approach that most N.G.O.’s are taking in an area that is 99.5 percent Muslim. New roads are replacing those washed out, and the creation of an infrastructure—from a new bus station to new places of business—is also well under way. New clinics and new hospital services are also planned. In the end, in the words of former President Bill Clinton, the goal is “to rebuild better.”

International media descended on the area on Dec. 26 for the first anniversary of the catastrophe, and some were critical of the response to date. A certain amount of criticism of the government and the N.G.O.’s may be fair, but no one who has personally seen how far the area has come can leave without being impressed by the overall response.

Behind it all, however, and ignored by many of those who comment on the response effort in Aceh Province, is the peace accord. Perhaps it is possible to say that God or Allah can make good come from the awful. Those alive on Sunday afternoon, Dec. 26, 2004, will live to see better days and better times because of a multifaceted response involving local populations and the people of the world. 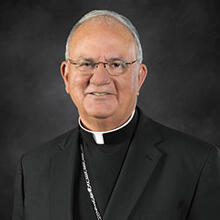 Most Rev. Robert N. Lynch is bishop of St. Petersburg, Fla., and chairman of the board of Catholic Relief Services.