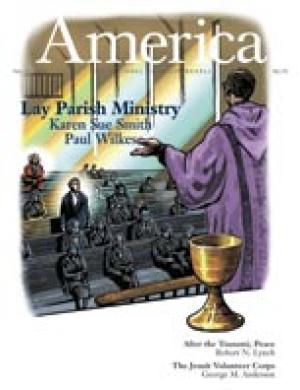 In the early 13th century, Francis of Assisi stood before Pope Innocent III and asked him to sanction a new way of life, which ultimately became a new religious order with a twist. The Franciscans would not be cloistered monks, but active brothers living in towns and countrysides, sustained by alms.

"Ruined for life”—that is the humorously ironic phrase used of young women and men who give one or two years of their lives to service in the Jesuit Volunteer Corps. The phrase was coined by Jack Morris, the Jesuit credited with having started it all—of whom more later. Althou

There is definitely a “peace dividend” to disaster relief, as I found in mid-December during my second visit to Banda Aceh, the large city in northern Sumatra (Indonesia) where over 118,000 lives were lost on Dec. 26, 2004. That was the day of the multiple catastrophes of a huge earthqua

A Thief in the Night
Valerie SchultzFebruary 27, 2006

My oldest daughter was mugged last Saturday night. She was talking with two friends in the parking lot of a restaurant in Los Angeles before saying goodbye for the evening. Two young men approached her and asked her for a light, and as she offered her lighter, there was suddenly a gun at her head. T

Some might find irony in the fact that at the time the National Pastoral Life Center was issuing a comprehensive report on the burgeoning numbers of laypersons serving in various parish capacities, the annual meeting of the U.S. Conference of Catholic Bishops this past November was having difficulti

Prohibiting men with certain characteristics from being ordained to the priesthood is nothing new in church discipline. More than 40 years ago, when I was still in the seminary, church law laid down a number of such impediments. According to the theology of the time, the office of the priesthood req

Massive overnight snowfalls in New York City usually mean awakening to a preternatural stillness, with city streets silenced for the moment before the plows begin to clear away huge mountains of snow and the noise of midtown traffic returns. The near-blizzard of 2006, the greatest snowstorm recorded