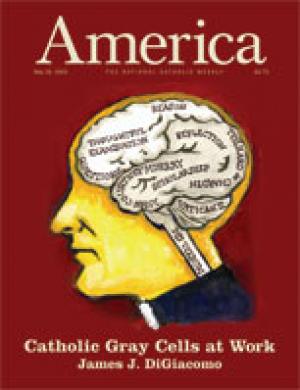 As May 2005 approached, the country noted a painful anniversary. In the spring of 1975 Saigon fell to the Viet Cong. The images still horrify. The memory remains too sad. Any healing thoughts are of the Vietnamese peoplethe millions killed and maimed but grieved, those who were on our side and were

It is hard today to appreciate the significance of the St. Louis Jesuits. Forty years after the Second Vatican Council, the idea of a vernacular liturgy that takes Scripture seriously and attempts to engage the congregation’s participation at every step has become relatively commonplace. But i

What the Pope Needs to Know
Kathleen McChesneyMay 30, 2005

The sympathetic response of Americans to the death of Pope John Paul II might suggest that the sexual abuse crisis in the United States has not harmed the reputation of the church, and that trust in its leadership remains strong. The public’s high regard for Pope John Paul II and the love of C

The Shield of Achilles
Drew ChristiansenMay 30, 2005

For me, growing up in the years after World War II, Memorial Day meant a civic service of remembrance at a neighborhood monument with a heart-stopping rifle salute to the dead; followed by a parade down Staten Island’s Victory Boulevard, where columns of veterans, active military units and martial

It is clear that the Catholic Church has a moral position on abortion. It is not clear that it has a political policy on the issue. Moral positions do not automatically create public policies. I may be morally opposed to the use of addictive drugs, but I may also think that the U.S. public policy of

From 2005, a popular article about faith and the intellect by the late James J. DiGiacomo, S.J.

Even longtime readers of America may be unaware of the origins of this periodical. It was born in April 1909, during the worst days of the anti-Modernist crusade in the Catholic Church. Hysterical paranoia ran rampant, and Catholic intellectuals and writers were one after another accused of heresy b