Skip to main content
Signs Of the TimesDecember 24, 2012 issue 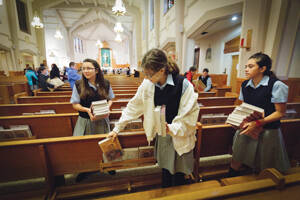 While it may do little to end disagreements among liturgists over recent changes to the Roman Missal, a survey conducted in September, nearly a year after controversial revisions of the English language Mass took effect, found that seven in 10 Catholics agree that the new translation of the Mass “is a good thing” (20 percent agree “strongly”). Nearly a quarter of the Catholics surveyed (23 percent) disagreed, however, and an additional 7 percent “strongly” disagree with the view that the changes were for the better.

Catholics who attend Mass weekly were the most likely to be satisfied with the new translation, according to a report prepared for the Catholic University of America by Georgetown University’s Center for Applied Research in the Apostolate. Eighty-four percent said that the revised Mass was a “good thing.” Just over 60 percent of self-identified Catholics who rarely or never attend Mass, however, were not positive about the changes. The new survey also found that regular Mass attendance levels remained the same, compared with a similar study conducted in 2011. Both polls estimated that about a quarter of adult Catholics attend Mass weekly or more often. Last year’s survey reported that only one in four adult Catholics were aware of the then-impending changes to the English-language liturgy, which began to be used during Advent 2011. This is part of the reason why this year’s apparent level of general satisfaction is of interest.

“As far as I am aware this is the only ‘pre- and post-’ national data examining Catholic reactions to changes in the liturgy,” noted Mark M. Gray, research associate at CARA and director of CARA Catholic Polls in a posting on CARA’s blog 1964 (nineteensixty-four.blogspot.com). CARA found no statistically significant changes in the numbers of Americans who self-identify as Catholic in the last year that might indicate an identifiable exodus from the church that could be related to the changes in the liturgy.

Anthony Ruff, O.S.B., an associate professor of theology at Saint John’s University and School of Theology-Seminary in Collegeville, Minn., reviewed the findings and said they suggested that “many people get used to ritual language and probably don’t pay real close attention to it.

“Most, not all, people accept the new texts,” he said, “but that doesn’t mean they’re any good; look at how well they accepted the bland texts we used to have.” He added, “Liturgists are glad the transition went well, but they still know mediocre English when they see it, and they’ll continue to call for a better revision with a better consultative process.”

Four in 10 respondents said they had noticed the language of liturgical prayer had changed “to a small extent,” and 23 percent noticed changes to a moderate extent. Only 6 percent said they noticed changes to a great extent. Thirty-one percent said they did not notice any changes. Those who perceived less change were most likely to agree that the new translation is a good thing. Among those who felt the language was greatly changed, a majority disagree that the new translation is a good thing (65 percent). This group, however, made up only a small number of respondents (6 percent).

I have a difficult time, honestly, understanding the translation imperative.  It seems to be a distinction without a (significant) difference.  And I find myself remaining silent rather than responding.

Cody Serra
8 years 10 months ago
Was this article written before the last week CARA study report was published? Otherwise, it amazes me the absolute conflict between the two reports.
Susan Nies
7 years 8 months ago
I am not a fan.
ANN CLEM
8 years 10 months ago
This is a perfect example of what is/has happened with the reforms of Vatican II. People take what's spoon fed to them, but don't really know what it is supposed to be. Due to the lack of carrying out the reforms of Vatican II, most people (unless they're over 65) don't know Vatican II as anything but an historical event. The new English translation of the liturgy is more archaic than it was before the change.
George Trejos
8 years 10 months ago
I agree with the assessment of Anthony Ruff. Ultimately you get use to the new translation but that does not mean it is better. There are moments that the new prayers do evoke refreshing poetry but I find that priests are still struggling with the prayers and parishes revert to the Apostles Creed insteading of using the Nicene. Generally the phrasing is ackward and archaic. When I lose my train of thought/prayer, I recall Jesus' admontion to avoid babbling in prayer, smile and lumber on.
Jim MacGregor
8 years 10 months ago
My post is very simple, I'm afraid. "Introibo ad altare Dei. - - - ad deum qui laetificat juventutem meam." I believe that whenever we come to mass or services we should come to the Lord as the joy of our youth and consider the externals as secondary - often important to attentive devotion, but nontheless secondary.
G Miller
8 years 10 months ago
The new translation stinks to high heaven and God knows it! Anyone that would write a prayer asking God to condense (dewfall is condensation) onto the hosts is another stupid priest who doesn't know any science. Furthermore, when was the last time your body and your spirit weren't in the same place at the same time -- "and with your Spirit" is utterly idiotic. We are also blessed with the return of classic Catholic guilt with the "mea culpa, mea culpa" malarkey? I am not fond of the guilt trip, thank you. I used to participate in Mass, now I generally tune it out because of the questionable theology (Jesus didn't come to save everyone, just the elect?) and just down-right horrible phrasing. Vatican II suggested using plain language but no one would speak in a normal conversation like the priests reciting the Eucharistic prayers in the new version. Like always, no one asks the faithful, the Bishops just go merrily along like this is an improvement. It is NOT an improvement and it isn't bringing anyone any closer to God, bad theology never does.
PAMELA SNYDER
8 years 10 months ago
When I read the article I wondered who was asked about the new translation? Surely any English teacher would give it bad marks. The language in the new translation is both awkward and remote. Every time I go to Mass I think, if Jesus spoke in phrases this removed from ordinary speech who would have hung around to listen to him preach! The non- science of dew falling, the insult of "and with your spirit" and the worst, "and peace on earth to people of good will" Thank goodness I no longer teach after school catechism... I can just hear some child say.... I don't have to love that person they're not of good will!
Nicholas Clifford
8 years 10 months ago
According to the December 15 Tablet (London), a survey carried out by the Diocese of Portsmouth in the UK found 45% of respondents "negative" or "very negative" about the new translations; 25% were "neutral" and just under a third were "positive." Those figures come from 307 respondents only, but most of them weekly or daily mass-goers. Perhaps the most worrying figure in the America story above is that 31% of the respondents said that they had noticed no changes in liturgical prayer. Does that suggest that they haven't been paying much attention to the liturgy either before or after the changes? Perhaps there's a another reason; but if not, what does that tell us?
Joseph Lee
8 years 9 months ago
I was happy to see that most of the comments about the new translation have been negative. Frankly, I was astonished when I read the headline for the article. The reference to "wide acceptance" seemed inexplicable. I was genuinely curious as to who could find this new translation acceptable. It seems sad that with all of the problems the church has gone through in this country, some number of people were devoting their time and energy to the translation that we are now being asked to use. My thanks, though, to the people who have offered comments; you've helped me feel less puzzled by my own lack of appreciation for the new and improved verbiage.
Tom Jackson
6 years 4 months ago
Wherever a “ceremonial binder” is used at the chair for the collect and the prayer after communion, the translation may not be from the 2010 missal. That’s been my experience presiding at Eucharist in a few parishes during the past 12 months. Beth McClurewebsite logo design