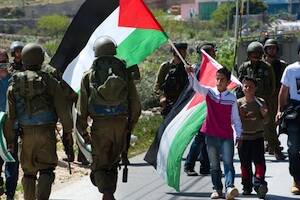 The Vatican praised a U.N. vote making Palestine a nonmember observer state but called for full recognition of Palestinian sovereignty as necessary for peace in the region. On Nov. 29 138 U.N. member states voted to boost Palestine’s status from “entity” to “nonmember state”—the same status held by the Holy See—in an implicit recognition of Palestinian sovereignty. Israel, the United States and Canada were among nine states that voted against the motion, and 41 countries abstained. The Vatican said in a written statement released on Nov. 29 that Palestine’s enhanced status “does not constitute, per se, a sufficient solution to the existing problems in the region.” Such a solution would require “effective commitment to building peace and stability, in justice and in the respect for legitimate aspirations, both of the Israelis and of the Palestinians.” The Vatican urged Israeli and Palestinian leaders to restart peace “negotiations in good faith and to avoid actions, or the placing of conditions, which would contradict the declarations of good will and the sincere search for solutions which could become secure foundations for a lasting peace.” The Vatican also noted its agreement with the Palestinian Authority in 2000 supporting “the recognition of an internationally guaranteed special statute for the city of Jerusalem.”

From AP, CNS, RNS, Staff and other sources
Show Comments (
1
)
Comments are automatically closed two weeks after an article's initial publication. See our comments policy for more.
Meqdad Taheri
9 years 6 months ago
The Jewish roots in Palestine go much farther back than most Muslims would be willing to admit. Before 1948, Palestine was ruled by a series of empires. Before that Palestine was Judaea—a Jewish country. Jews have lived in Palestine continuously for more than 3,300 years. "Palestine" was the name given to the Jewish homeland in the second century by the Romans, in an attempt to break the Jewish adherence to the land. This was a century after the Jewish temple was destroyed and more than a million Jews were massacred. The Jews stopped fighting the Romans only after they had no more fighting men standing. As Evangelist William Eugene Blackstone put it in 1891, “The Jews never gave up their title to Palestine… They never abandoned the land. They made no treaty, they did not even surrender. They simply succumbed, after the most desperate conflict, to the overwhelming power of the Romans.” The Jews persisted through the centuries under the various empires, after the Arab invasion of 635AD (which they fought alongside the Byzantines), and after the Crusade massacres of the 11th Century, which decimated much of their population. Few Muslims realize that Jewish customs, religion, prayers, poetry, holidays, and virtually every walk of life, documented for thousands of years—all revolve around Judaea/Palestine/Israel. For thousands of years Jews have been praying for Jerusalem in every prayer, after every meal, in every holiday, at every wedding, in every celebration. The whole Jewish religion is about Jerusalem and the Land of Israel. Western expressions such as “The Promised Land,” and “The Holy Land,” didn’t pop out of void. They have been part of Western knowledge and tradition dating back to the beginning of Christianity and earlier. After the Crusades, the Jews—including many who have returned over the centuries—lived peacefully with Arabs, often in the very same villages, as in Pki'in, in the Galilee, until the Zionist immigration of the 19th and 20th Centuries. Article 6 of the PLO Charter specifically calls for the acceptance of all Jews present in Palestine prior to the Zionist immigration. These Jews were simply another ethnic group in a region composed of Sunnis, Shiites, Jews, Druz, Greek Orthodox, Catholics, Circassians, Samarians, and more. Some of these groups, like the Druz, Circassians, Samarians, and an increasing number of Christians, are actually loyal to the Jewish State. Incidentally, genetic studies consistently show that Zionist immigrants (a.k.a., Ashkenazi Jews) are closely related to groups that predate the Arab conquest, like the Samarians, who have lived in Palestine for thousands of year. Arab and Muslim denial may lead to events such as the ones brilliantly depicted in Jonathan Bloomfield’s award-winning book, “Palestine,” in which actual history and predicted events are thinly veiled as fiction. War and bloodshed will continue until the Arabs and Muslims stop clinging onto fabricated histories, and acknowledge that the Jewish roots in Palestine go back thousands of years, long before the Arab invasion of Palestine.