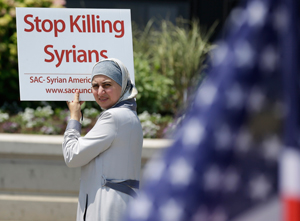 Caritas Lebanon reports that refugees are continuing to arrive from Syria as more Christians and Alawite Muslims fear they could become targets of Sunni Islamic militants who want to avenge the Houla massacre. On May 25-26 an attack alleged to have been committed by Syrian army forces and militia-supporters left about 108 people dead in Houla, including 49 children and 34 women. A Greek Syrian Catholic said that he left his village because of fighting between the army and rebels but especially because of a plague of kidnappings of Christians. Refugees said if other massacres happen, “Christians may pay a high price.” One Syrian priest said, “Everyone is afraid.... We don’t know what the future holds.” Muslim fundamentalists could take advantage of a regime change in Syria, he said, adding that the best way to deter extremism is for all citizens to work together. “Right now people think that if ‘they’ win, then ‘I’ lose. But we all can lose. We need to rebuild together,” he said.

This article also appeared in print, under the headline “Syria Crisis Continues,” in the June 18, 2012, issue.