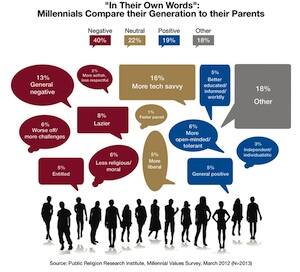 America’s millennial generation came of age during a period of acute economic uncertainty. That may explain why more than three-quarters of them say unemployment and finding a job are their greatest concerns, according to a new survey of “millennial values” from the Public Religion Research Institute and the Berkley Center for Religion, Peace and World Affairs at Georgetown University.

The second greatest concern of this young generation—its oldest members are pushing 30 and its youngest are on the verge of college—looks toward future economic problems; 55 percent say addressing the federal deficit is critically important, ranking education next (54 percent) as a major concern. Only one in five say social issues like abortion (22 percent) or same-sex marriage (22 percent) are critical social issues.

More than 15 percent of Americans now check the “none” box when asked about religious affiliation, and the survey offers no reason to believe that trend is likely to reverse. More than 25 percent of college-age millennials describe themselves as religiously unaffiliated. Twenty percent of college millennials describe themselves as Catholic, but another 8 percent said they had been Catholics in childhood but were no longer, indicating a significant drop-off of Catholic affiliation by adulthood.

Regarding other U.S. faith traditions, 12 percent describe Mormons in negative terms, and 47 percent believe that Islamic values are at odds with American values and way of life.

“College-age Millennials are also notable for their support for economic reforms that address the gap between the rich and the poor,” said Daniel Cox, Research Director at the Public Religion Research Institute. “More than 6-in-10 Millennials say that one of the biggest problems in this country is that we don’t give everyone an equal chance in life.”

Nearly 70 percent believe that the government should do more to reduce the gap between the rich and the poor, and 72 percent favor the “Buffett Rule,” which would increase the tax rate on Americans earning more than $1 million a year. At the same time, two-thirds also believe that poor people have become too dependent on government assistance.

President Obama can still count on the support of millennials this fall, just not as many as had backed him four years ago. Not only has his once commanding lead among millennials slipped, but a good number of young people may be sitting out the November election. The survey finds that President Obama holds a seven-point lead over a generic Republican candidate, with nearly half (48 percent) of millennial voters saying they would prefer that Obama win the 2012 election. But the survey also finds that only 61 percent of college-age millennials are currently registered to vote, and only 46 percent say they are absolutely certain they will vote in November.