Skip to main content
Signs Of the TimesJanuary 30, 2012 issue 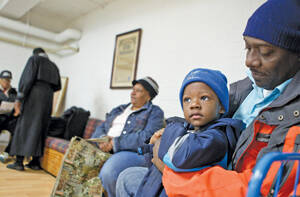 Several legislative challenges to crucial domestic and international anti-poverty programs were turned back in 2011, but the same programs will probably require defending again in 2012. That is the word from Bread for the World’s president, the Rev. David Beckmann, as his anti-hunger organization launched its annual congressional lobbying campaign, called Offering of Letters, on Jan. 17.

Beckmann said “huge” victories in 2011 were worth celebrating: “I’m just thunderstruck that we managed to get through 2011 without any major cuts to programs focused on poor and hungry people in the United States and around the world.” He attributed that success to the Circle of Protection, a multifaith alliance that included the U.S. Conference of Catholic Bishops, the National Council of Churches, the National Association of Evangelicals and many more.

John Carr, the executive director of the U.S.C.C.B.’s Department of Justice, Peace and Human Development, likewise noted some underappreciated legislative achievements “in a difficult environment.” Perhaps most notable among them was a provision in the debt ceiling agreement that exempted low-income entitlement programs like Medicaid and the Supplemental Nutrition Assistance Program from automatic budget cuts in 2013.

In the budget debates last year, according to Beckmann, church groups first raised the alarm about an “overall attack on all programs focused on poor people.” The message the Circle of Protection took to Congress and President Obama was simple: there should be better ways to reduce the federal deficit than “taking food aid from desperate people and W.I.C. from hungry kids.” Congress and the president eventually agreed, settling on a deficit reduction strategy that preserved anti-poverty programs. But 2011 successes cannot be taken for granted. “The future looks tougher,” Carr said.

According to Beckmann, many of the same programs—support for the unemployed, nutrition programs for U.S. children and food relief for the hungry around the world—will again fall into legislative crosshairs.

Beckmann is especially concerned about possible foreign aid cuts. He said U.S. aid was instrumental in essentially halting the AIDS pandemic last year and in improving agricultural production around the world. Much of that progress could be lost in 2012.

“We need to speak up in 2012 and say, whatever you do about military spending, do not cut effective assistance to African farmers,” said Beckmann. “In the end, I think the prophets are clear that our security does not depend on iron chariots; it depends on right worship and doing right by the poor.”

Looking to next year, Carr worried that “the wall that protects essential low-income programs could be breached.” He called the near silence on poverty among the current crop of presidential candidates “ominous.”

“In all the partisan crossfire and political posturing, it’s quite likely that the poor will be ignored or worse,” he said. “When resources are scarce or leadership is missing, very often the poor pay the price in terms of the budget and other choices.”

For his part, Beckmann remains optimistic. “This is not rocket science,” he said. Other countries are succeeding today in reducing poverty, just as the United States has done in the past. “We’ve got to have organized give-a-damn,” said Beckmann, “and we’re not going to have organized give-a-damn again unless a lot of Catholics and Protestants are moved by the Holy Spirit to insist on getting our country to get serious about poverty again.

“If that happens,” he said, “I think we could see very rapid progress against poverty and hunger in the United States and around the world.”