The Bible, the Jews and the Passion 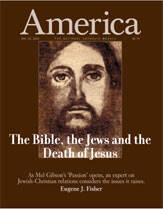 A week or so before Ash Wednesday this year, the Committee for Ecumenical Affairs of the U.S. Conference of Catholic Bishops will release a 150-page resource book for use by Catholic preachers, teachers, interested laity and Catholic-Jewish dialogue groups. Entitled The Bible, the Jews and the Death of Jesus: A Collection of Catholic Documents, the publication will bring together excerpts and in some cases entire documents from various levels of Catholic teaching (the Second Vatican Council, Pope John Paul II, the Pontifical Biblical Commission, the Pontifical Commission for Religious Relations with the Jews and the U.S.C.C.B. itself) pertinent to how the church reads its Scriptures, understands its relationship with Jews and Judaism, and understands and presents its ever-deepening reflections on the saving mysteries of the Passion and death of Christ, the one Savior of humanity.

In his introduction to this collection, Bishop Stephen E. Blaire of Stockton, chairman of the committee, quotes from an address given by Pope John Paul II in 1997 to a group of Catholic, Protestant and Orthodox Christian scholars assembled by the Holy See to study together The Roots of Anti-Judaism in the Christian Milieu.

Erroneous and unjust interpretations of the New Testament regarding the Jewish people and their alleged culpability have circulated [in the Christian world] for too long, engendering feelings of hostility toward this people. They contributed to the lulling of consciences, so that when the wave of persecutions swept across Europe...the spiritual resistance of many was not what humanity rightfully expected from the disciples of Christ. Your examination of the past, in view of a purification of memory, is particularly appropriate for clearly showing that anti-Semitism has no justification and is absolutely reprehensible.

Note the carefulness and clarity of the pope’s words: erroneous and unjust interpretations of the New Testament. These ancient errors in the interpretation of the Passion narratives of the Gospels centered around the unjust and unjustifiable idea that the Jews (as opposed to some individual Jewish leaders) were and remained in subsequent generations collectively guilty for the death of Jesus. The Holy Father asserts that as embroidered over the centuries in theological tomes, popular preaching and Passion plays contributed to the passive acquiescence and active participation of far too many Christians during the Holocaust. What, then, are some concerns raised by these documents that preachers, teachers and those involved in creative presentations of the Passion need to take into account?

1. Theologically, responsibility for Jesus’ death lies with the sins of all humanity, not just the particular Jews or Romans who were historically involved.

The Roman Catechism (1566)of the Council of Trent is cited by the recent Catechism of the Catholic Church to underscore that we cannot lay responsibility for the trial of Jesus on the Jews in Jerusalem as a whole...still less can we extend responsibility to other Jews of different times and places (No. 597). The Roman Catechism stated: Since our sins made the Lord Christ suffer the torment of the cross, those who plunge themselves into disorders and crimes crucify the Son of God anew in their hearts.... Our crime in this case is greater in us than in the Jews. As for them, according to the witness of the Apostle, None of the rulers of this age understood this; for if they had, they would not have crucified the Lord of glory.’ We, however, profess to know him. And when we deny him by our deed, we in some way seem to lay violent hands on him. Of all the historical actors, we are reminded, only Pilate is mentioned in the ancient creeds of the church.

2. There must be an overriding preoccupation to bring out explicitly the meaning of the Gospel text while taking scriptural studies into account.

This means that it is not enough simply to say that a given passage is in the Bible. Any single depiction will inevitably involve a selection from the four Gospels mixed with historical and artistic, creative elements. It is here that the old Passion plays tended to create the illusion of collective guilt, for example by depicting Jesus as opposed to Judaism, of which he was, rather, a devout adherent throughout his life. Indeed, Jesus submitted himself to the Law (Gal 4:4), extolled respect for it (Mt 5:17-20) and invited obedience to it (Mt 8:4).

3. The presentation of Judaism must be nuanced.

There were many different groups and movements in first-century Judaism, as there are today: Sadducees (supporters of the Temple priesthood), Zealots (revolutionaries against Rome), apocalypticists, Herodians, Hellenists, scribes, sages, miracle workers and Pharisees of various schools of interpretation of the Law, ranging from the strict (for example, Shammai) to the more lenient (Hillel). Jesus is often depicted in the Bible in dialogue with the Pharisees, whose views on many things, such as a final divine judgment and the resurrection of the dead, Jesus shared. Many of his teachings were quite similar on the Law to those of Hillel, for example, whose followers would scorn the Shammaites as hypocrites and legalists, as did Jesus. In Luke, Pharisees try to warn Jesus against going to Jerusalem because of a plot against his life by the followers of Herod. It is likely that the sympathy for Jesus represented by Joseph and Nicodemus would have been shared by other Pharisees as well. The Synoptic Gospels (even Matthew, whose polemic against the Pharisees is the strongest), do not have them playing a role in Jesus’ arrest or trial, only the chief priests and various scribes and elders.

4. Positive images of Jews and Judaism from Scripture should be as or more plentiful than negative ones.

Jews should not be portrayed as money-greedy or bloodthirsty, for example, by changing the small crowd in Pilate’s courtyard into a teeming mob. The Gospels clearly describe Jesus as being arrested at night because he was popular with the Jews, and in Luke, the women of Jerusalem weep as he is carrying his cross. Scenes of Jesus praying with his fellow Jews in synagogues, sharing the Passover Seder with them, and so on, will be helpful. Staging and costuming likewise need careful scrutiny. Are Jewish characters made to look dark and ominous over against Jesus and his followers?

5. The role of Pilate needs to be approached with great care.

Matthew and John, among the Gospels, seem to portray Pilate as a vacillating administrator who would have freed Jesus but for the manipulations of Caiaphas, the chief priest. While not exonerating Caiaphas (who is remembered in Jewish history negatively as a collaborator with Rome), other data from the Gospels and ancient secular sources such as Philo and Josephus portray Pilate as a ruthless tyrant. The Roman governor held absolute power over the chief priest, whom he appointed. When Pilate was called back to Rome, likely because his extreme cruelty (e.g., crucifying hundreds of Jews at a time without trial; see Lk 13:1-4) was stirring rebellion, Pilate’s successor immediately deposed and replaced the chief priest. The Gospels agree that in Roman eyes Jesus’ crime was that of political sedition against Rome, crucifixion being the Roman form of punishment for treason, a charge made explicit by the mocking sign King of the Jews nailed to the cross.

6. There is, then, room for more than one dramatic style in depicting the role of Pilate and the chief priests while being faithful to the biblical and historical records.

It needs to be clear that Christ went freely to his death to save us all from the death of our sins, and that while some authorities of the Jews and those who followed their lead pressed for the death of Christ; still, what happened in his Passion cannot be blamed upon all the Jews then living, without distinction, nor upon the Jews of today. Although the church is the new people of God, the Jews should not be presented as rejected by God or cursed, as if such views follow from Sacred Scripture. All should take pains, then, lest in catechetical instruction and in the preaching of God’s Word they teach anything not in harmony with the truth of the Gospel and the spirit of Christ (Nostra Aetate, No. 4).

It is impossible to overstate the importance of the church’s call to Catholic preachers and teachers to exercise an overriding preoccupation with getting the Gospel accounts of Jesus’ arrest, Passion and death just right. The condemnation of the charge of collective guilt against the Jews was one of the most dramatic and theologically significant moments of the Second Vatican Council. Making it clear that it is our sins, not those of the individual actors in the events themselves, that bear the responsibility for Jesus’ death, lies at the very heart of the Christian proclamataion of the Gospel. Both Christians and Jews involved in the dialogue rightly understand that removing once and for all the ancient charge of deicide is the litmus test for the integrity of all our efforts, on both sides, since the council to bring about the reconciliation of the church with God’s people, the Jews.

Eugene J. Fisher is associate director of the U. S. Conference of Catholic Bishops’ Secretariat for Ecumenical and Interreligious Affairs. Since the early 1980’s he has been a consultor to the Holy See’s Commission for Religious Relations with Jews and, for the commission, a member of the International Catholic-Jewish Liaison Committee.