On Being Gentle and Firm 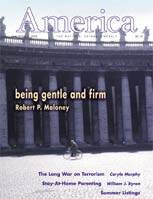 About once a month here in Rome, I go to St. Peter’s and enter when the doors open at 7 a.m. It is awesome to gaze at the huge, empty basilica as the morning light filters through the windows. Lately I have found myself immediately drawn to the altar of Pope John XXIII, where an older Italian priest celebrates Mass each day for a small group of people. I stay to listen, since I find his homilies fascinating. As a preacher, he does almost everything wrong and almost everything right.

In my more critical, professor-like moments, I censure him for speaking too long (a malady to which many of us priests succumb). Nor are his homilies especially unified. He pours out one thought after another, bouncing from place to place in the readings of the day or in the life of the saint whose feast we are celebrating. If he has further thoughts, and he usually does, he adds them as he leaves the altar after Mass, standing in the midst of the little congregation gathered around him.

So why do I listen so eagerly? Because so much is so right in what he says and does as a preacher. He reminds me of a comment that Thomas Merton once made about a priest in his monastery: “He’s the only one really worth listening to around here. The others speak about Christ, but this one really knows Christ.” You pick that up right away as you listen to this priest speaking to his tiny flock. He is filled with love and enthusiasm for the word of God in the person of Jesus and in the Scriptures. He is also well prepared; it is clear that he has studied the readings of the day and has meditated on them in prayer. This week, as I sat among his listeners, he told us about an obscure ninth-century pope about whom I knew absolutely nothing. Yet he made him come alive, not just for me but, I sensed, for everyone in the little group of lay people who were there. Even the sleepy-looking altar boy, whose mother had surely just pried him out of bed, perked up as the homily went on.

But the best came when Mass was over. He took a few steps down from the altar and, standing there among us, raised his hand and said: “The chroniclers of his time say that this pope was firm, even tough, in dealing with the emperor and other important civil and ecclesiastical authorities, but they say that he was gentle and accommodating in dealing with the weak and poor. I was reflecting this morning: the temptation is just the opposite for us. We tend to be gentle and accommodating with those in authority, and firm, sometimes even tough, with the weak and the powerless. Let’s pray for each other that the Lord will give us the spirit of this pope.” Then he simply walked away. An elderly Italian woman elbowed me in the side and said, “This guy really knows what he’s talking about.”

All day long I thought about the message: gentle and firm, how do we keep the balance? He was surely right. The temptation for most of us is to acquiesce to the powerful and to be tough with the powerless.

The headline of an article in The New York Times on Nov. 17, 2002, read: “F.B.I. Is Harsher to Underlings Than to Bosses, Report Says.” Sadly, that sometimes happens in the church too. But perhaps things are changing.

One of the unforeseeable results of the tragic crisis facing the church in the United States these days is that many lay Catholics are speaking up courageously, even to members of the hierarchy. They are saying bluntly: “No more coverups! No more use of our money to silence those who have been wronged.” Other voices have been even bolder, saying to some bishops and cardinals: “You yourself have been irresponsible and have hidden your culpability behind a wall of silence and secrecy.” At the same time, many of these same voices have spoken with gentleness and compassion toward victims who have long had a sense of powerlessness.

Finding the balance between gentleness and firmness is not easy as we attempt to contribute actively to a church whose mission, as Pope John Paul II so often describes it, is to “build a civilization of love.” In fact, healthy Christian living involves a whole series of paradoxical qualities: transparency/prudence, creativity/humility, initiative/obedience, flexibility/stability, listening/advising, animating/directing, trusting/planning, serving/governing.

But the balance between gentleness and firmness is especially elusive. Even the most virtuous of saints struggled to find it. The great saint of charity, Vincent de Paul, often encouraged his followers to have “the spirit of Our Lord, who was equally gentle and firm.” He once wrote to his friend Louise de Marillac, a co-worker and also a saint, whom he judged to be too gentle: “If the gentleness of your spirit needs a drop of vinegar, borrow a little of it from the spirit of Our Lord. Oh, how very well he knew how to find the bittersweet when it was necessary.”

The paradox gentle/firm is nowhere more evident than in the Christian call to action on behalf of justice and to peacemaking. Today especially, witness to Jesus’ gentleness and his proclamation of a kingdom of peace play a very prominent role in the church’s preaching of the good news. As we debate about the situation in Iraq, Pope John Paul II’s words in Centesimus Annus have an eloquent ring: “I myself, on the occasion of the recent tragic war in the Persian Gulf, repeated the cry: ‘Never again war!’ No, never again war, which destroys the lives of innocent people, teaches how to kill, throws into upheaval even the lives of those who do the killing and leaves behind a trail of resentment and hatred, thus making it all the more difficult to find a just solution of the very problems which provoked the war.”

Without justice, there is no abiding peace. But Aquinas reminds us that the passion most immediately associated with justice is anger. Anger recoils in the face of injustice. It springs back in order to gather energy to strike out at what is wrong. It moves us to hunger and thirst for what is right. Anger is born from love and respect for the human person, whose rights we perceive as being violated. It strains to right wrong, to re-establish an order in which persons can grow and flourish. It will always be aroused, therefore, when we perceive that unjust structures are depriving the poor of the political, social, economic or personal freedom that their human dignity demands.

The truth is that a good dose of anger is sometimes very helpful in life. Anger is creative energy. It can be used for good or for bad. The challenge is to channel it properly. Unleashed in an uncontrolled way, it lashes out in harsh words, biting insults, violence, sexual aberrations, riots, even war. Stuffed-up, repressed anger often churns out, from deep-down-within, a wide variety of maladies like headaches, ulcers, chronic depression and occasional unexplainable explosions.

But the gentle find creative ways to express anger in “action on behalf of justice and participation in the transformation of the world.” For those eager to change societal structures, education for justice and peace will be a primary means. The preaching ministry and sacrificial, dying love of Jesus provide us with the most striking examples of this response to injustice and violence. Jesus chooses to “resist the evildoer” by speaking the truth with love. The last century has provided us with other striking examples of nonviolent strugglers for justice, in persons like Mahatma Gandhi, Martin Luther King Jr. and Dorothy Day.

Peacemaking and reconciliation too will be among the basic goals of the gentle. I am reminded of the role that the Community of Sant’Egidio played in mediating peace in Mozambique. After 15 years of civil war, “human wisdom” would surely have doubted the ability of a “powerless” Italian lay community to accomplish what other much more powerful groups like the United Nations and the Vatican had failed to bring about. Yet negotiations were successfully completed in 1992, with the community’s help, and peace continues to reign in that country. Andrea Riccardi, one of the founders of the Community of Sant’Egidio, describes the means used during the peacemaking process as “the ‘weak strength’ of the Gospel.” Could other “powerless” groups show similar courage in offering their services as ministers of reconciliation in other perennially troubled spots of the world?

In the lives of the gentle, conversation and dialogue, accompanied by suffering love, will be among the principal means for settling conflicts. These are the tools that Jesus himself used; Paul tells the Ephesians that he is “our peace, and breaks down the wall of separation.” If the community of his disciples has a genuine passion for dialogue, justice and peace, then it is a clear sign that the kingdom of God is at hand.

Gentleness need by no means be passive. Rather, “passionate” gentleness knows how to direct anger, to channel it so that “justice rolls like a river” and becomes a mighty torrent that uproots oppressive societal structures and softens the ground so that fresh seeds can be planted. W. E. B. DuBois sums up this gentle passion in a lovely prayer:

Give us grace, O God, to dare to do the deed which we well know cries to be done. Let us not hesitate because of ease, or the words of men’s mouths, or our own lives. Mighty causes are calling us—the freeing of women, the training of children, the putting down of hate and murder and poverty—all these and more. But they call with voices that mean work and sacrifice and death. Mercifully, grant us, O God, the spirit of Esther, that we may say: I will go unto the King and if I perish, I perish. Amen.

Robert P. Maloney, C.M., the superior general of the Congregation of the Mission, writes from Rome.