Of many things: Longing for nature 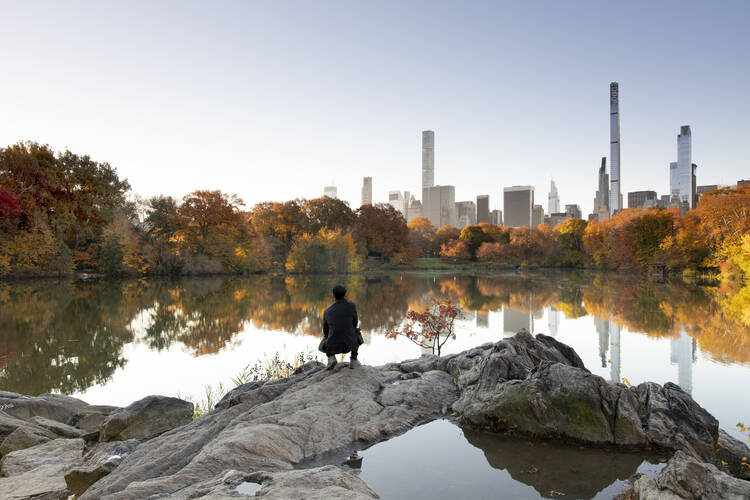 When I returned last fall to New York City after 30 years away, what demanded the most adjustment for me was the absence of light. “Welcome to New York,” I was told. The deprivation of daylight is one of the things New York apartment-dwellers have to endure. Used to sunshine and skyscapes, I found that even on a sunny day my skyward view from America House was blocked by high-rises. Lights burn in my room by day as well as by night.

A tree-hugging, backpacking ecophile, I longed for daylight the way wanderers in the desert long for water. Fortunately for me Central Park is only three blocks away. The park has become for me, as for so many, a haven where I can breathe the light, smell the earth and listen to birdsong. For office workers, I discovered, it is such a sanctuary that at lunch hour most speak in hushed tones.

One recent Sunday I walked the snow-clad park in amazement at the diversity of people and activity. Name the language, it was spoken. Spanish, of course, German, Russian, Japanese. One newlywed Japanese couple kept turning up at picturesque sites to have their photos taken. The bride, her shoulders bare, seemed impervious to the cold.

At the Wollman Rink skaters circled round to the rhythm of brassy tunes, while a long queue waited their turn for the ice. On a half dozen hills children were sledding. In front of the Naumburg Bandshell, adults held a snowball fight. On one plowed stretch men and women on roller blades danced to Salsa music, and on the crossroads the Type A’s, who feel leisure must be work, jogged and raced their bicycles. It would have taken a Bruegel or America’s own Grandma Moses to do the scene justice.

When I lived in California and wandered the Bay Area hills, I used to feel enormous gratitude for those who had the foresight to preserve regional parks.

When I lived in California and wandered the Bay Area hills and the Sierra high country, I used to feel enormous gratitude for those who, like John Muir, had the foresight to preserve regional parks, like Mt. Tamalpais, and the great national parks, like Yosemite. In Central Park, gratitude sweeps over me for Frederick Law Olmsted, his colleagues and supporters. Olmsted, 19th-century America’s pre-eminent landscape architect, was for 20 years the principal force in building Central Park.

At a time when the Bois de Boulogne contained a racecourse and Hyde Park was the scene of military reviews, Olmsted and his colleague, Calvert Vaux, designed a park for the people, where depending on their pleasure they could be “gregarious” or “neighborly.” Combining pastoral landscapes, like the Sheep Meadow, and picturesque terrain, like the densely wooded Ramble, a 37-acre wildness in the heart of the park, with monumental settings like the Literary Walk and the Bethesda Terrace, they created multiple sites that invited a variety of activities for the city’s residents. The scene of skaters and sledders, dancers and newlyweds, strollers and joggers I had seen that Sunday was just the kind of mixed recreation Olmsted and Vaux sought to encourage.

The American park with its blend of public space with patches of wild land, like the Ramble and North Woods in Central Park, also continues to hold possibilities for urbanites to encounter wildlife. Central Park is home to raccoons, woodchucks and rabbits, turtles and frogs. In her 1998 book on birdwatching in the park, Red-tails in Love (Vintage), Marie Winn recounts the efforts of a pair of hawks to mate, nest and hatch a brood on the ledge of a Fifth Avenue apartment building across the street from the park.

A 1996 census recorded 275 bird species in the park. The variety of the park’s wildlife is a result both of neglect in the 1960’s and 70’s, and of careful restoration by the Central Park Conservancy since the 80’s. Global warming has also had a role. As the range of numerous species have shifted northward, the park has been the beneficiary. Olmsted would have been pleased that the park he designed still hosts so much life.

Drew Christiansen, S.J., is an associate editor of America.