On Straightening Out Catholic Seminaries 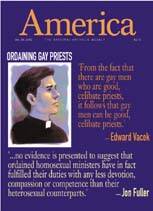 One of the deeply troubling outcomes of the Catholic Church’s recent scandals involving sexual abuse and the abuse of administrative power is the call from many quarters to exclude from seminaries men who are gay. This is troubling, because it flies in the face of simple logic. Experts have repeatedly pointed out that the sexual abuse in question—pedophilia and ephebophilia—are functions of arrested sexual development, not of a particular sexual orientation. It is also troubling because it is misleading and diverts attention from the real causes of the problem.

Voices asserting that individuals with a homosexual orientation must be excluded from seminaries and from being ordained have come from many quarters. Archbishop Tarcisio Bertone, secretary of the Vatican’s doctrinal congregation, said that “persons with a homosexual inclination should not be admitted to the seminary.” Joaquín Navarro-Valls, the Vatican spokesman, opined that “people with these inclinations just cannot be ordained.” Philadelphia’s Cardinal Anthony Bevilacqua noted that “a person who is homosexual-oriented is not a suitable candidate for the priesthood even if he had never committed any homosexual act.” Recently in America (9/30)the Rev. Andrew R. Baker of the Vatican Congregation for Bishops noted that the homosexual orientation “is fundamentally flawed in its disordered attraction because it can never ‘image’ God and never contribute to the good of the person or society.” A Catholic News Service story (Am., Signs of the Times, 10/21) discussing an anticipated position paper on the subject quotes an unnamed source saying, “The document’s position is negative, based in part on what the Catechism of the Catholic Church says in its revised edition, that the homosexual orientation is ‘objectively disordered.’ Therefore, independent of any judgment on the homosexual person, a person of this orientation should not be admitted to the seminary and, if it is discovered later, should not be ordained.”

While these strong assertions may not surprise those familiar with the church’s longstanding teaching on homosexual acts, they are examples of an increasingly harsh stance being taken toward the homosexual orientation itself. Such statements seem to contradict the catechism’s teaching that with self-mastery, grace, friendship and prayer, homosexual persons “can and should gradually and resolutely approach Christian perfection” (No. 2359). They certainly stand in stark contrast to the lived experience and spiritual discernment of many religious orders and at least some diocesan seminaries.

Many formation programs have evolved dramatically in their approach to the appropriate treatment of sexuality. Whereas in former years the subject was essentially treated with silence, it is now widely recognized that if seminarians are to understand and live in a healthy way the vow of celibacy, adequate attention must be given to sexuality and to psychosexual development during their training.

The need to address these issues more openly has been in part stimulated by the church’s experience that silence on sexuality can lead to a poorly integrated, uncritical and sometimes self-loathing adult sexuality that may eventually respond inappropriately to sexual urges that have never been honestly faced (whether homosexual or heterosexual). Men who take a vow of celibacy must be able to deal frankly and openly with numerous questions and challenges that arise as they pass through various stages of adult development. This forthrightness is seen as a critical component not only of initial formation, but also of being a happy, integrated adult living the vow of celibacy.

Given the fact that a significant number of priests are high-functioning, integrated and self-respecting gay men, the topic of homosexuality is an increasingly comfortable subject of discussion for many clergy and religious—at least among colleagues. For men in religious orders, being known and supported by one’s brothers is a central aspect of community life. Many now find it fundamental, at least with close friends and in small groups, to speak about sexual orientation as an important part of one’s identity—perhaps as important and basic as describing one’s family of origin. And this attitude of openness and acceptance is not restricted to religious communities. As reported in the May 20 issue of Newsweek, students and faculty at St. John’s Seminary in Camarillo, Calif., (which serves the nation’s largest archdiocese) observed that “being gay is not a big deal.”

In consultations with people in leadership in religious orders, dioceses and vocational development that I have attended in recent years, it is my impression that there is little discomfort with the presence of gay members and applicants. Indeed, some orders have policies explicitly indicating that gay applicants can be admitted. Rather than focusing on sexual orientation as the issue, attention is more appropriately directed toward assuring that all members be integrated, healthily transparent, generous and respectful of (and able to live and work with) persons different from themselves.

In a presentation this year to the National Religious Vocation Conference, the psychologist Donna J. Markham, O.P., Ph.D., A.B.P.P., director of the Southdown Institute in Toronto, commented: “More importantly, I...believe we are clearly asking the wrong question. The issue is not one of sexual orientation but one of relational integration.... It is an issue of possessing the spiritual and emotional health for religious life.” Canice Connors, O.F.M.Conv., former head of the St. Luke Institute in Maryland and current president of the Conference of Major Superiors of Men, raised this issue in a recent letter to C.M.S.M. members regarding the current crisis in the church: “I would also like to say a word about the shadow of suspicion being cast over our brothers living out the gracious mystery of homosexual orientation. We treasure all of our brothers in community. We all treasure and share the same gift of celibacy. We are all journeying toward God by seeking God first in one another.... But I want to assure all of our brothers where we stand and it is in firm solidarity with all religious living a celibate life.”

The current drive to exclude gay seminarians could return seminaries to an unhealthy psychological environment, one that promotes secrecy, duplicity, repression and homophobic attitudes and behaviors intended to prove (to others and to oneself) that one is heterosexual. History teaches that in a society (and church) in which homosexuality is stigmatized, personal and societal pressures to ignore same-sex feelings, or to “change” or to “cover” a homosexual orientation, can be enormous—and profoundly debilitating. Indeed, individuals who passed through traditional seminary formation decades ago have in some cases not been able to honestly recognize and respond positively to their homosexual orientation until 20, 30 or 40 years later.

Given the magnitude of the assertion that homosexual individuals “can never ‘image’ God and never contribute to the good of the person or society,” it is remarkable that no evidence is presented to suggest that ordained homosexual ministers have in fact fulfilled their duties with any less devotion, compassion or competence than their heterosexual counterparts. If anything, the historic record shows that gay men in the ordained ministry have served effectively at the highest levels of pastoral and administrative leadership within both religious and diocesan/episcopal structures.

There has long been a divide between the Catholic anti-homosexual view and the perspective of the behavioral sciences (i.e., that homosexuality is not a pathology). This split has now spread to the heart of the church itself, where the service record of homosexual ministers stands in stark contrast to arguments that they are unfit for such service. This divide is not just about differing conclusions; it is also about the methods deemed appropriate for reaching such conclusions. Whereas the affirmative perspective regarding homosexual ministers has been informed by reflection on the experience of living and working with gay men, the negative view has been deduced a priori from the church’s teaching that only heterosexuality can be affirmed.

Scripture teaches that “a good tree cannot produce bad fruit; neither can a bad tree produce good fruit” (Mt 7:18). If, as many in the church observe, “good fruit” is being produced by those whom the church considers to be “intrinsically disordered,” something is profoundly amiss. This crisis may represent a precious opportunity for the church to reflect on what it means to “discern from the signs of the times” how it is being called by Christ to live as an enfleshed community of faith. Perhaps the church is being challenged to broaden its view of human beings (and of God) and challenged to recognize that God has given to humanity at least two kinds of trees, both of which produce good fruit for the community, neither of which need threaten nor contradict the other.

Show Comments (
5
)
Comments are automatically closed two weeks after an article's initial publication. See our comments policy for more.
14 years 12 months ago
The proposal to ban homosexual men from the priesthood should be implemented (12/16).

No individual can claim to have a vocation to the priesthood without the people of God ratifying that call and a bishop “validating” the vocation by conferring the sacrament of holy orders. Thus, the recent “ordinations” to the priesthood of several women were not recognized by the church. Down through the years the church has always had restrictions on who can be ordained priests. There have been physical, mental and spiritual demands made that have resulted in certain men being barred from ordination, even though they felt they had a priestly calling from God. A recent example is men being refused ordination because of their allergy to wheat gluten.

It is wrong to ordain homosexual men to the priesthood. Their very lives are witness to selfishness and sterility, even those who are celibate and chaste. Christ, the very giver of life itself, can never be found in a homosexual act. It is an impossibility. How can homosexual priests proclaim the holiness of married and family life when their whole being is centered on sterile attraction to others of the same sex?

Francis DeBernardo’s letter, “Badly Fractured” (12/9), has got it completely wrong. The banning of homosexuals from the priesthood will cause great pastoral good, and help to restore faith in a Vatican and U.S. hierarchy that have lost their moral leadership in recent decades.