Back in the 17th century, the Anglican priest-poet George Herbert maintained that the national sin of his day was idleness. Whether that was an accurate portrayal we must leave to historians and sociologists. But Herbert had no qualms in proposing that there was sin—one of a national kind.

This observation raises a question for our day—a time in which many people feel no need for salvation, since they are not really guilty of any “big” sin—murder, rape or the like. In fact, is there any sin at all, much less need for a redeemer? The question of personal, social and national sin is simply set aside as irrelevant, since sin, like the dinosaur, has historical interest but is an extinct species.

But in our more honest moments, we know something is wrong. There is ubiquitous brokenness of relationships all around us as families fall apart, countries go to war, injustices run rampant and racism and killings abound. Sin is alive and well, even if we use sociological language like alienation to describe it.

A question: What sins have we inherited from our previous century? And are these sins national in character, limited to our land, or are they, given the nature of our global village, universal, touching all nations and affecting all cultures? I propose that we can identify at least three global sins: muddledness, numbness and drifting.

The sin of muddledness. Pluralism and relativism have left a legacy of pervasive confusion. With different worldviews and a plethora of lifestyles, standards for truth and goodness have all but vanished. Tolerance has become the supreme value. Anyone’s opinion is as valid as anyone else’s. Subjectivity sits on the throne.

When even the experts cannot agree, it is no surprise that the masses are muddled. Skeptics and cynics now abound. Individuals, attempting to sort through life’s complexities, are left to themselves in an age of permissiveness and doubt. People of conviction are shunned and communities of belief are accused of deception. Will the waters ever clear?

We are dealing here with the crucial issue of truth, a truth that sets the human heart free. What is at stake is whether or not it is true that every single person has inherent dignity, that the universe has meaning, that something is awry that needs fixing, that love is stronger than death, that God, who creates, sustains us still. Nor are these matters for the philosopher’s ivory tower or the theologian’s esoteric ponderings. We need the grace of clarity to counter the sin of muddledness.

The sin of numbness. In his novel The Reader, Bernhard Schlink reflects on the numbness found in survivor literature, “in which life’s functions are reduced to a minimum, behavior becomes completely selfish and indifferent to others, and gassing and burning are everyday occurrences.” Such was the experience of many in the concentration camps. But numbness is broader than these war horrors. All of us are confronted with a dulling of the senses, heart and mind as we deal with the complexities of our modern world.

One expression for this is compassion fatigue. We are surrounded by so much suffering—AIDS victims, Rwanda, Kosovo, friends with cancer—that we continue to block out large portions of reality. T. S. Eliot suggested, in poetic language, that we cannot take in too much reality. But the danger is that we begin to live lives of numbness, feeling basically nothing. The sense of wonder disappears and our hearts shrivel, offering no hospitality.

Shod feet have a hard time feeling the soft earth. The grace of vulnerability is a contemporary need. The courage to go where the suffering is, to feel the excitement of new life, to plunge into the warm and icy waters of life is the only way to live. The Spanish poet Antonio Machado claims that of all the words that Jesus spoke, including love and forgiveness, the most important ones were "Wake up!"

The sin of drifting. In the course of a single month, I came across the theme of drifting in three distinct sources. In his scholarly work Clashing Symbols: An Introduction to Faith and Culture, Michael Paul Gallagher, S.J., comments: "Either we drift confusedly 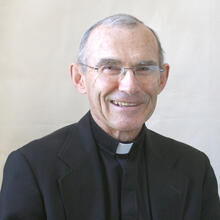 The Most Rev. Robert F. Morneau is auxiliary bishop of Green Bay, Wis.