Responding to the refugee crisis 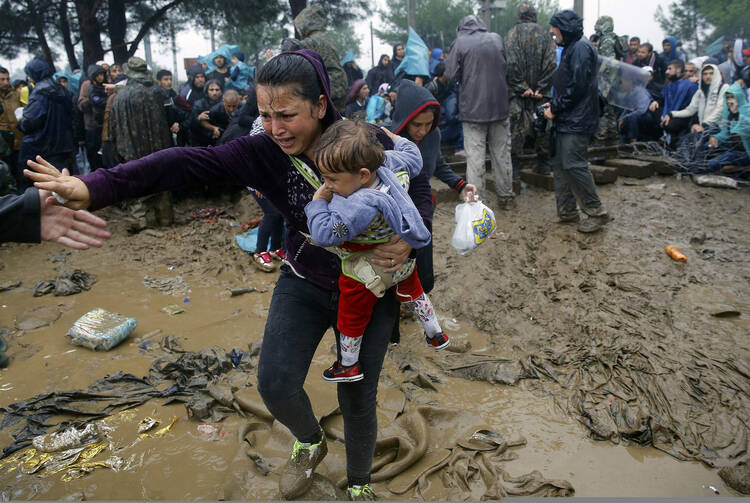 International news in recent months has brought a steady stream of stories about migrants and refugees—their struggles to reach safety in Europe and their struggles after they get there. They leave their homes out of fear for their lives or at least in the hope of providing a future for their families. They put themselves in the hands of human traffickers at the cost of their meager financial assets, of their human dignity and even of their lives. They crowd into unsafe boats to cross the Mediterranean or into overcrowded trucks for long road trips.

For a while attention focused on Calais in France, where thousands gathered hoping to grab a ride in a truck through the tunnel to England, visible across the English Channel. It moved to Germany, where right-wing groups started harassing the newcomers. Attention moved to the Greek island of Kos, a short distance from Turkey. Most shocking was an abandoned truck discovered near Vienna that held 71 decomposing bodies. Accompanying photos were compelling: angry protesters in England or Germany; a small group huddled at a Hungarian border crossing with a police car close by. Then there was the Turkish officer lifting the body of a drowned Syrian boy from the sea.

The influx of newcomers is testing the European Union’s open borders. At the urging of Germany, France and Britain, the interior and justice ministers of the European Union were due to meet on Sept. 14 to address the issue. They planned to discuss building reception centers for new arrivals where they could determine which of them are properly called refugees, whose home countries are not safe, and which are migrants, who simply want to build a new life. This distinction affects the legal responsibilities of the receiving countries.

The newcomers to Europe come from a number of countries in Africa and the Middle East. In the Middle East in particular, violence, persecution and political unrest make life unbearable for millions. A great number of the refugees are from Syria, where the situation is desperate.

Syria’s President Bashar al-Assad is a ruthless tyrant who resorted to massive violence during the Syrian civil war in 2011. Many countries have called on him to resign, but they have no way to make this happen. Since 2010, according to a United Nations report, over half the population of Syria has been internally displaced or has fled the country.

Mr. Assad controls only a fraction of Syria. A small territory is under the control of the Free Syria Army, formed by military officers during the civil war. But the Islamic State (ISIS) controls much of the country. Particularly in his war against ISIS, Mr. Assad drops barrel bombs, which have killed and maimed thousands of civilians.

The situation of the mass migration to Europe has two major factors. One is the plight of those who make it to a receiving country. The other is the situation that forces or at least urges them to leave their homes hoping to find a better future. The European Union is attempting to address the first of these issues. But the second remains intractable.

The meeting of E.U. ministers is a welcome first step, and it may lead to a follow-up meeting of the leaders of the E.U. member states. This would be another welcome development. Welcome too is the move among E.U. states and others to set quotas for new arrivals, though this is stirring up resistance. But still more is needed.

Economic development in many countries in the Middle East and in Africa would stop some of the migration flow, and world leaders have to look at new ways to foster this. This is a long-term project.

The violence in the Middle East, particularly in Syria, demands immediate attention. But can anything be done? Muslim leaders have spoken out against President Assad, but they have no authority to force anything on him. Members of the Arab League have spoken out too, but Mr. Assad ignores them. Few would suggest a massive military invasion; the cost would be far too high and the chance of success low. The Free Syria Army seems to be the most reasonable of the three power groups; it is also the smallest.

One suggestion has been to enforce a no-fly zone over Syria. This could stop the indiscriminate carnage from the barrel bombs, which are dropped from helicopters. Another would be the creation of a free zone along the border with Turkey, where Syrians fleeing violence could find at least temporary safety. This would follow up on an agreement last summer between Turkey and the United States to create an ISIS-free zone along that same border.

These are not permanent solutions, but they would save lives today. The long-term solution demands international cooperation and good will, not easy to come by but nonetheless crucial. Perhaps the intense international energy that produced the successful Iranian nuclear deal could now be devoted to this pressing crisis.

The Editors
Show Comments (
1
)
Comments are automatically closed two weeks after an article's initial publication. See our comments policy for more.
MICHAEL WEAVER DR
7 years 4 months ago
The final sentence in this article is perhaps the most absurd statement that I have ever encountered in print.