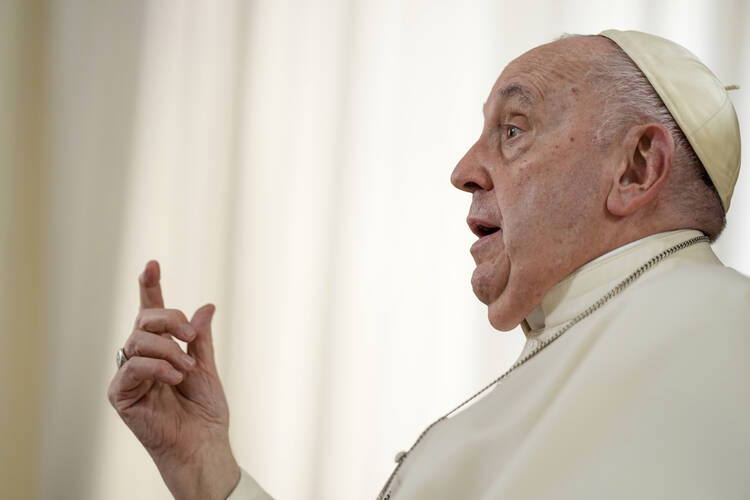 Pope Francis speaks during an interview with The Associated Press at The Vatican, Tuesday, Jan. 24, 2023. Pope Francis said there's a risk that what could be a trailblazing reform process in the German church could become "ideological." (AP Photo/Andrew Medichini)

Pope Francis spoke out against laws that criminalize homosexuality, critiqued the use of guns by civilians, admitted to his own and the church’s mishandling of the sexual abuse crisis, and reassured the world of his good health in a wide-ranging exclusive interview with Nicole Winfield, the Vatican reporter for The Associated Press. The interview was published this morning, Tuesday, Jan. 25.

“Being homosexual isn’t a crime,” Francis said, recognizing that some bishops support laws that discriminate against or criminalize homosexuality. He went so far as to characterize these actions by bishops and countries as “sin.” He stated that “these bishops have to have a process of conversion,” and appealed for “tenderness, please, as God has for each one of us.”

Some 67 countries or jurisdictions worldwide criminalize consensual same-sex sexual activity, 11 of which can or do impose the death penalty, according to The Human Dignity Trust, which works to end such laws. Experts say even where the laws are not enforced, they contribute to harassment, stigmatization and violence against L.G.B.T.Q. people.

“Being homosexual isn’t a crime,” Francis said, recognizing that some bishops support laws that discriminate against or criminalize homosexuality.

In the United States, more than a dozen states still have anti-sodomy laws on the books, despite a 2003 Supreme Court ruling declaring them unconstitutional.

The AP also asked the pope about civilian gun violence, especially in the wake of the mass shootings in California in the days leading to the interview. The pope said he was alarmed by the proliferation of firearms and “how that need to defend oneself lengthens, lengthens, and becomes a habit.”

In recent months, the pope has faced sharp criticism over the church’s handling of the sexual abuse crisis, most recently in the case of Marko Rupnik, S.J., a Jesuit priest who is alleged to have sexually, spiritually and psychologically abused a number of women in Slovenia. Father Rupnik was convicted by the then Congregation for the Doctrine of the Faith for having absolved a woman in the confessional with whom he had sexual activity, a crime which results in automatic excommunication. Francis said he was not actively involved in the handling of the case against Father Rupnik. “I had nothing to do with this,” he said.

Francis also shed light on the Vatican’s handling of another historic sexual abuse case. In the interview, he appears to suggest that Bishop Carlos Ximenes Belo of East Timor, who won the Nobel Peace Prize in 1996, was protected by the Vatican when allegations of sexual abuse were brought against him, and was allowed to retire early. “This is a very old thing where this awareness of today did not exist,” Francis said, referring to the legacy approach to handling sexual abuse cases in the church. But “when it came out [in September 2022] about the bishop of East Timor, I said, ‘Yes, let it go in the open.’ ... I’m not going to cover it up. But these were decisions made 25 years ago when there wasn’t this awareness.”

“I’m in good health. For my age, I’m normal. I might die tomorrow, but I am under control,” 86-year-old Pope Francis said.

“I’m in good health. For my age, I’m normal. I might die tomorrow, but I am under control,” 86-year-old Pope Francis said, when asked about the state of his health. The pope admitted during the interview that “diverticulosis, or bulges in his intestinal wall, had ‘returned,’” the AP reported. “I always ask for the grace the Lord will give me a sense of humor,” he said. He also discussed the criticism and opposition he has faced from some bishops and cardinals, including the late Cardinal George Pell.

The conversation also addressed criticisms that Francis has received for his decision to enter and renew an agreement with China on the nomination and appointment of bishops. China's government has a deplorable record on human rights and has imprisoned priests on dubious pretexts.

“We are taking steps,” Francis said when asked about the Vatican’s next diplomatic steps with China. “Each case [of a bishop’s nomination] is looked at with a magnifying lens,” he said, adding, “that’s the main thing, the dialogue doesn’t break.”

The pope, signaling that his primary concern was the safety and pastoral needs of Catholics in China, who are a small minority, defended his decision to cooperate with Chinese authorities. While “sometimes they are a little closed, sometimes not,” he said, "we must walk patiently in China.”

This is a developing story and will be updated as the AP publishes more details on the interview.

This article contains reporting from The Associated Press.

Ricardo da Silva, S.J.
@ricdssjrdasilva@americamedia.org
Show Comments ()
Join the conversation: Login or create an account
Before you can comment, you need to update your profile to include your first and last name, as required in our comments policy. Then reload this page and you'll be set up for commenting. Update your profile