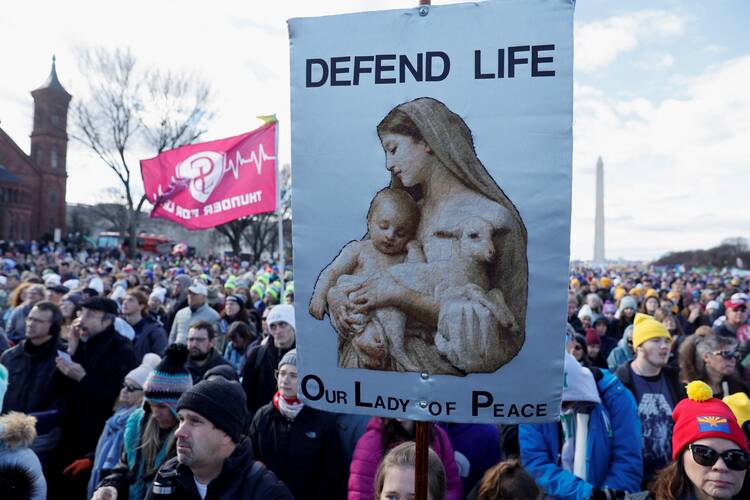 Today’s Gospel, which is still that of Monday of the Third Week of Ordinary Time, gives us Jesus speaking about the paradox and contradiction of division: “If a kingdom is divided against itself, that kingdom cannot stand.”

In the Gospel, Jesus poses this paradox as a reductio ad absurdum in response to the accusation that he casts out demons by the power of the prince of demons. His answer to those speaking evil of him is, essentially, that they’re not making sense even by the terms of their own slander. If overthrowing the power of evil is taken as evidence of one’s being evil, then how would one ever be able to recognize good? Following this logic, Jesus says, leads to a situation where mercy and forgiveness are no longer possible, since calling good evil because it casts out evil—to blaspheme against the Holy Spirit—interprets even mercy itself as coming from the power of evil.

If your head is spinning a bit trying to follow Jesus through this Gospel passage, allow me to suggest two ways to get your bearings. First, the logic of evil or what we might call, in this case, “anti-mercy,” doesn’t make sense. So the headache we get in response to it is at least in part a sign of basic sanity, a kind of rational allergy to evil. It reminds us that the best response to the evil spirit is to stop listening to it when we recognize it, not to try to win an argument with it. That’s why Jesus calls it out for not making sense rather than trying to offer proof of his own goodness.

With respect to abortion, our society is surely “a kingdom divided against itself.”

Second, notice that Jesus makes a stunning claim in the middle of this: “Amen, I say to you, all sins and all blasphemies that people utter will be forgiven them.” This is not just a throwaway line to contrast with the blasphemy against the Holy Spirit that “will never have forgiveness.” It is a reminder that God’s mission, the work of the kingdom, is mercy, forgiveness and reconciliation. That is what the Holy Spirit is doing, and that is what the evil spirit tries to obscure. So stop listening to the spirit that pretends mercy is impossible, and focus on the Holy Spirit whose mercy is without end.

This call to discernment of spirits and to hew to the Holy Spirit is particularly apt at this point in January. If you are at Mass today, you may see purple vestments—not because Lent has started early, but because on the liturgical calendar for the church in the United States, the anniversary of Roe v. Wade is a “particular day of prayer and penance” in reparation for the injustice of abortion and intercession for legal protection for unborn children. And when Jan. 22 falls on a Sunday, as it did for the 50th anniversary of Roe v. Wade yesterday, that day of prayer is transferred to Monday.

With respect to abortion, our society is surely “a kingdom divided against itself.” Healing that division will not be a matter solely of winning a political or legal argument, but of placing mercy and compassion at the center of our social and political arrangements, so that any woman facing a challenging or unwanted pregnancy can be secure in knowing that she has better options than abortion. One of the collect prayers available for Mass today asks God to “awaken in every heart reverence for the work of your hands, and renew among your people a readiness to nurture and sustain your precious gift of human life.” That “readiness to nurture and sustain” is a work of mercy. May we have the courage and the patience to cooperate with the Holy Spirit in making it so.