Pope Francis: Long homilies are ‘a disaster’—keep it under 10 minutes 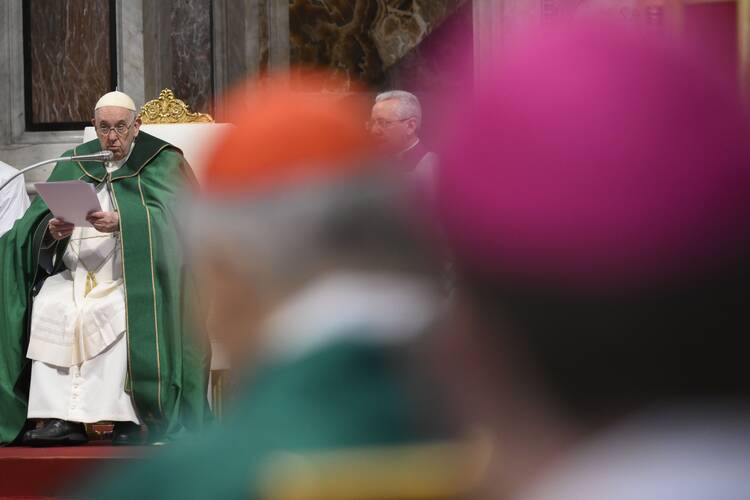 Pope Francis gives the homily as he celebrates Mass marking Sunday of the Word of God in St. Peter's Basilica at the Vatican Jan. 22, 2023. (CNS photo/Vatican Media)

VATICAN CITY (CNS)—Lengthy, abstract homilies are “a disaster,” so preaching should be limited to 10 minutes, Pope Francis said.

Speaking off the cuff to diocesan liturgical directors Jan. 20, the pope said homilies are not academic conferences. “I sometimes hear people say, ‘I went to this parish, and yes it was a good philosophy lesson, 40, 45 minutes,’” he said.

Pope Francis encouraged priests to keep their homilies to “no more than eight to 10 minutes” and always include in them “a thought, a feeling and an image,” so that “the people may bring something home with them.”

Homilies are “sacramentals” to be “prepared in prayer” and “with an apostolic spirit,” he said.

But, in the Catholic Church, he said, “in general, the homilies are a disaster.”

A pastoral approach to the liturgy allows religious celebrations to “lead the people to Christ, and Christ to the people,” which the pope said is the “principal objective” of liturgy and an essential principle of the Second Vatican Council.

The liturgical directors were in Rome to participate in a formation course on liturgy, “Living Liturgical Action Fully,” at the Pontifical Institute of Liturgy.

Pope Francis also warned against the liturgical master of ceremonies assuming too central a role during Mass. “The more hidden a master of ceremonies is, the better,” he said. “It is Christ that makes the heart vibrate, it is the meeting with him that draws in the spirit.”

A pastoral approach to the liturgy allows religious celebrations to “lead the people to Christ, and Christ to the people,” which the pope said is the “principal objective” of liturgy and an essential principle of the Second Vatican Council.

In the Catholic Church, the pope said, “in general, the homilies are a disaster.”

“If we neglect this, we will have beautiful rituals, but without vigor, without flavor, without sense, because they do not touch the heart and the existence of the people of God,” said Pope Francis.

The pope encouraged them to spend time in parishes, observe liturgical celebrations and help pastors reflect on how they prepare liturgy with their communities.

If teachers of liturgy are “in the midst of the people, they will immediately understand and know how to accompany their brothers and sisters, how to suggest what is suitable and feasible to communities, and what the necessary steps are to rediscover the beauty of the liturgy and celebrating together,” he said.

The job of a diocesan liturgical director, said Pope Francis, is to offer parishes a liturgy “that is imitable, with adaptations that the community can take to grow in liturgical life.”

A liturgical director should not care about a parish’s liturgy only when the bishop comes to visit and then let the liturgy go back to how it was after he leaves, the pope said.

“To go to parishes and not say anything when faced with somewhat sloppy, neglected, poorly prepared liturgies means not helping the community, not accompanying them,” he added.

Justin McLellan – Catholic News Service
@McLellan_Js
Show Comments ()
Join the conversation: Login or create an account
Before you can comment, you need to update your profile to include your first and last name, as required in our comments policy. Then reload this page and you'll be set up for commenting. Update your profile