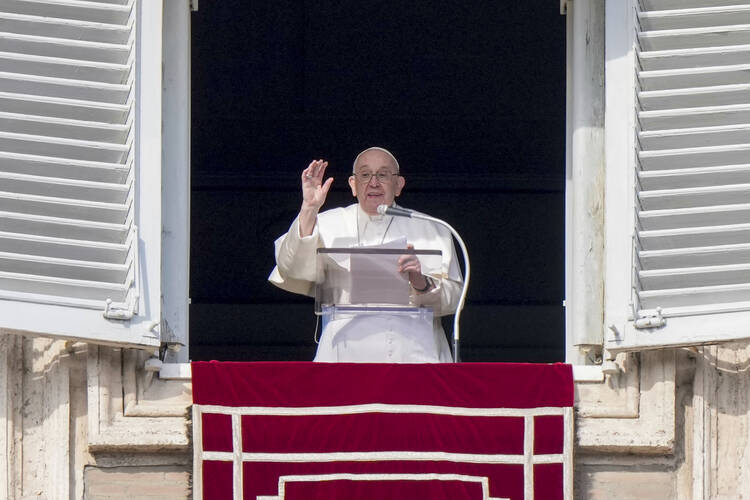 Pope Francis delivers his blessing as he recites the Angelus noon prayer from the window of his studio overlooking St.Peter's Square, at the Vatican, Sunday, Jan. 22, 2023. (AP Photo/Andrew Medichini)

Greeting thousands of pilgrims from many lands in St. Peter’s Square on Sunday, Jan. 22, Pope Francis sent his New Year greetings to the peoples in different countries of the Far East who are celebrating the Lunar New Year. He didn’t mention any country or people by name, but his greeting is intended for all those in China, Korea, Vietnam, Malaysia, Singapore, the Philippines and countries across the world—including Italy—with large overseas populations from these countries.

The Chinese are celebrating the arrival of the Year of the Rabbit.

“On this joyful occasion,” the pope said he also wished to express his “spiritual closeness to all those who are going through moments of trial caused by the coronavirus pandemic, in the hope that these present difficulties will soon be overcome.”

“On this joyful occasion,” Pope Francis said he also wished to express his “spiritual closeness to all those who are going through moments of trial caused by the coronavirus pandemic.”

These words would seem to be addressed in particular to the Chinese in mainland China, Hong Kong and Macau, who have suffered greatly during the main period of the pandemic, but also from the stringent measures imposed by the authorities (though the pope did not mention them) and are still suffering today even as the pandemic still takes a great toll.

Francis knows the Chinese and other peoples, in accordance with their tradition, travel great distances and make great efforts to be with their families for this festival. He said he hopes that “the kindness, sensitivity, solidarity and harmony that is being felt in these days in families as they traditionally reunite, may always permeate and characterize our family and social relations so as to be able to live a serene and happy life.”

Then, looking to another part of Asia, the pope expressed “his sorrow” at the “burning and destruction of the church of Our Lady of the Assumption in the village of Chan Thar” in Myanmar, which “was one of the most ancient and important places of worship in the country.”

“I am close to the helpless civilian population [of Myanmar] that are enduring hard trials in many cities,” the pope said.

“I pray to God that this conflict may quickly end, and that a new time of pardon, love, and peace may come,” he said. He concluded by inviting all present to pray together the Hail Mary to Our Lady of Myanmar for peace in this land.

Then looking to Latin America, he called and prayed for “an end to the acts of violence in Peru” and “a just solution to the problems” of that country. He encouraged “all the parties involved to embark on the way of dialogue” since they are all brothers and sisters of the same nation, and he appealed to them to respect human rights and the rights of the state. He concluded by joining the bishops of Peru in saying: “No to violence from whatever side it comes. No to deaths!”

He concluded his Sunday greeting as he always does these days by praying for “the martyred people of Ukraine, who are suffering so much, so much.”