History will not remember your prayers, but they still matter 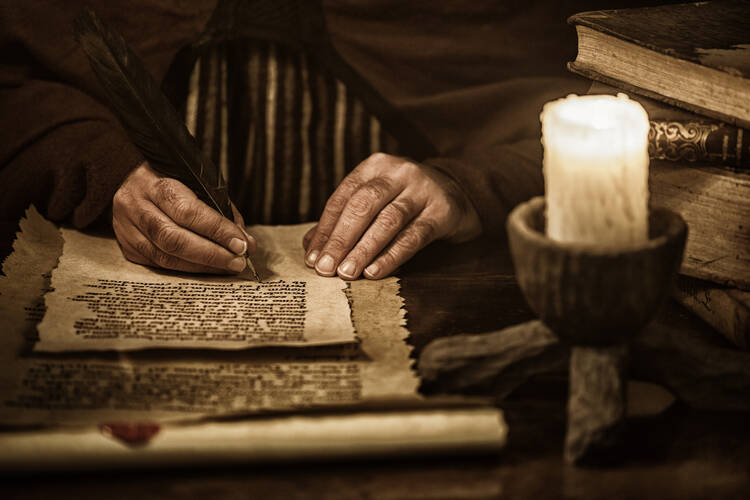 A Homily for the Third Sunday in Ordinary Time

No one likes to pay taxes, but most of us receive one undebatable benefit from them. Tax rolls will be the only quasi-indelible record of our existence. Until the rise of the nation-state and its concomitant taxes, most people passed through history without a trace. Even their names are lost to us.

This makes every glimpse we have of those known to history more precious. Consider, for example, those who have only ever lived in the Mediterranean world, the place where modern Western history arose. What we know of those past souls is equivalent to what we would learn today if we tried to explore that same world by way of flashlight. Caesar left us his military exploits. Plato recorded the ideas of Socrates. But we really know nothing of these men. Deeds and ideas are not emotions, desires, joys or sorrows.

As he was walking by the Sea of Galilee, he saw two brothers,
Simon who is called Peter, and his brother Andrew,
casting a net into the sea; they were fishermen.
He said to them,
“Come after me, and I will make you fishers of men”
At once they left their nets and followed him (4:18-20).

The same passage yields two more names, James and John, but the evangelists have no interest in the biographies of these men. The Gospels are not even biographies of Jesus of Nazareth, so little concerned are they with the details of his life.

No, the Gospels are proclamations. If some names are recorded within them, it is only because they are essential witnesses to something that happened in history, something that greatly concerns every man and woman who has ever lived.

Regarding the call of the first disciples, we have no idea what really happened—or better, what happened within the souls of these four men.

Regarding the call of the first disciples, we have no idea what really happened—or better, what happened within the souls of these four men. We do not know how they became convinced that their very salvation, certainly the meaning of their existence, had arrived in the person of Jesus. The flashlight that is history illumines so very little!

Before faith becomes a list of what is believed, it is an actual experience of the living God. Our emotions, desires, joys or sorrows are, as we say, touched by grace. Indeed, until and unless this happens, religious practice is no more than a habit, a collection of beliefs accepted without personal experience of their truth.

The Catechism of the Catholic Church expresses this truth quite succinctly.

By his Revelation, “the invisible God, from the fullness of his love, addresses men as his friends, and moves among them, in order to invite and receive them into his own company.” The adequate response to this invitation is faith (No. 142).

If we want to know what it is like when God moves among us, from the inside, so to speak, we must turn to St. Augustine of Hippo. His Confessions have been called the world’s first autobiography.

How does one sum up the work?Augustine had a ravenous soul. He stole apples to gain friends; he went to church to seduce women; he vehemently rejected the Catholicism of his mother for an intense immersion in the intellectual trends of his day.

Augustine rose to the height of learned acclaim, an imperial appointment, insisting that Plato must have been right: There is a world of soul-nurturing truth to be found beneath this passing world of passions. Augustine could brilliantly teach this truth, but he could not live it. As he put it, his passions mocked his effort.

The frivolity of frivolous aims, the futility of futile pursuits, these things that had been my cronies of long standing, still held me back, plucking softly at my garments of flesh and murmuring in my ear, “Do you mean to get rid of us? Shall we never be your companions again after that moment…never…never again? From that time onward so-and-so will be forbidden to you, all your life long (VIII.11).

We are quick to condemn those whom we identify as hypocrites, who teach one thing and practice another. I think God will be gentler. If moral leaders who themselves fall short have any integrity, they are already living something of a hell on earth. Their shame may not be apparent, but it haunts them. Augustine wrote, “And so the two wills fought it out—the old and the new, the one carnal, the other spiritual—and in their struggle tore my soul apart” (VIII.5).

How limited history is! It records great deeds and noble thoughts, but prayer, the most significant of all human activity, exceeds its grasp.

Here’s the story of Augustine’s encounter with grace. He had gone to a garden to reflect, accompanied by his young protégé, Alypius. In the silence of the place, Augustine’s interior inferno again burst into flame. He withdrew from his friend. No man chooses to cry in front of another.

Now we are ready for the first glimpse of grace caught in the light of history. Augustine records what Peter, Andrew, James and John could not.

I went on talking like this and weeping in the intense bitterness of my broken heart. Suddenly I heard a voice from a house nearby—perhaps a voice of some boy or girl, I do not know—singing over and over again, “Pick it up and read, pick it up and read.” My expression immediately altered and I began to think hard whether children ordinarily repeated a ditty like this in any sort of game, but I could not recall ever having heard it anywhere else. I stemmed the flood of tears and rose to my feet, believing that this could be nothing other than a divine command to open the Book and read the first passage I chanced upon; for I had heard the story of how Antony had been instructed by a gospel text. He happened to arrive while the gospel was being read, and took the words to be addressed to himself when he heard, Go and sell all you possess and give the money to the poor: you will have treasure in heaven. Then come, follow me. So he was promptly converted to you by this plainly divine message. Stung into action, I returned to the place where Alypius was sitting, for on leaving it I had put down there the book of the apostle’s letters. I snatched it up, opened it and read in silence the passage on which my eyes first lighted: Not in dissipation and drunkenness, nor is debauchery and lewdness, nor in arguing and jealousy; but put in the Lord Jesus Christ, and make no provision for the flesh or the gratification of your desires. I had no wish to read further, nor was there need. No sooner had I reached the end of the verse than the light of certainty flooded my heart and all dark shades of doubt fled away (VIII.12).

What happened? Is that all Augustine wrote? Do you still feel that history, even autobiography, has left you standing outside the event that is grace, that is faith?

Then let us close with the most beautiful paragraph ever penned. Countless souls have felt the stir of grace just hearing the recorded prayer of Augustine’s heart. How limited history is! It records great deeds and noble thoughts, but prayer, the most significant of all human activity, exceeds its grasp.

Late have I loved you,
Beauty so ancient and so new,
Late have I loved you!
Lo, you were within,
But I outside, seeking there for you,
And upon the shapely things you have made I rushed headlong,
I, misshapen.
You were with me, but I was not with you.
They held me back far from you,
Those things which would have no being
Were they not in you.
You called, shouted, broke through my deafness;
You flared, blazed, banished my blindness;
You lavished your fragrance, I gasped, and now I pant for you;
I tasted you, and I hunger and thirst;
You touched me, and I burned for your peace (X.27).