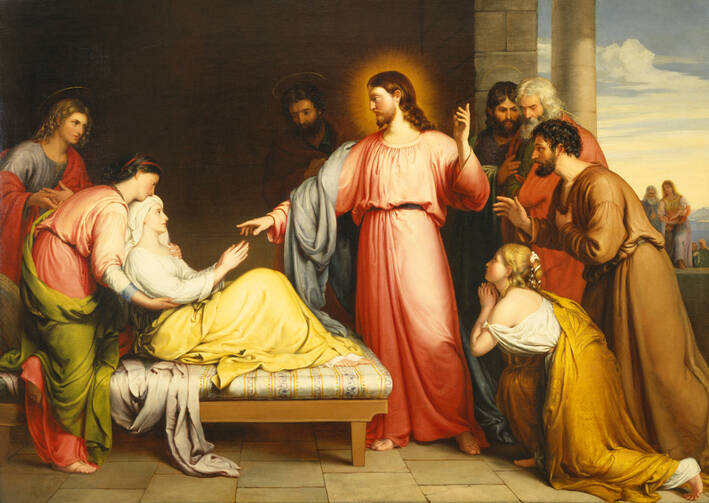 “He told his disciples to have a boat ready for him because of the crowd,
so that they would not crush him.
He had cured many and, as a result, those who had diseases
were pressing upon him to touch him” (Mk 3:9-10)

The Jesus we meet in today’s Gospel from Mark is a man who, for better or worse, has made a name for himself. The Pharisees have begun plotting to kill Jesus because he healed the withered hand of a man on the Sabbath. His reputation for healing has spread beyond Galilee, and a large number of people from the surrounding region have come with the hope that they, too, may be cured. So desperate are these men and women—afflicted by disease and demons—that Jesus has a boat ready in case he has to flee to avoid being crushed by the crowd.

How different this Jesus seems from the one described in the first reading from the Letter to the Hebrews. “It was fitting that we should have such a high priest: holy, innocent, undefiled, separated from sinners, higher than the heavens” (7:26). The Jesus amid the crowd in Galilee may be holy and innocent, but he is very much surrounded by sinners and down on the earth.

How can we make sense of these very different depictions?

How quick are we to demonize someone based on a single tweet or quote taken out of context, only to later see that their story is much more sympathetic or complicated than we thought?

The Jesus of Mark’s Gospel has, in the parlance of the internet age, gone viral. And as is so often the case when people gain social media notoriety today, neither Jesus’ detractors nor those hanging on his every word fully understand who he is. To the Pharisees he is a dangerous lawbreaker; to the people following Jesus, he is a miracle worker and their last hope. But only the demons recognize him as the Son of God.

I don’t imagine many of us would be a much better judge of Jesus’ character today. How often do we flock to modern-day “miracle workers” or thought leaders, only to realize they are frauds? And how quick are we to demonize someone based on a single tweet or quote taken out of context, only to later see that their story is much more sympathetic or complicated than we thought? Would our snap judgments of Jesus be any closer to the truth?

Personally, whether I responded to Jesus like the Pharisees or the desperate crowds would probably depend on whether I was feeling sick that day. Which is why I take so much comfort in how he responds to both these groups. He does not try to argue with the Pharisees or explain to those suffering from disease what they are not ready to understand. Instead, he is patient with their limited vision and above all present to people’s needs.

This is the same Jesus that the Letter to the Hebrews describes—with the benefit of hindsight. He is not a criminal or a huckster. Though he dines with sinners, he is innocent. Though he touches lepers, he is undefiled. Because he sacrificed his life, Jesus “has obtained so much more excellent a ministry / as he is mediator of a better covenant,/ enacted on better promises” (Hb 8:6). And this is the same Jesus that wants to heal us—of our hardheadedness, pride, suffering and inner demons—even if we do not yet fully understand his ways.