Pope Benedict and Pope Francis wanted to change the same thing: all of us. 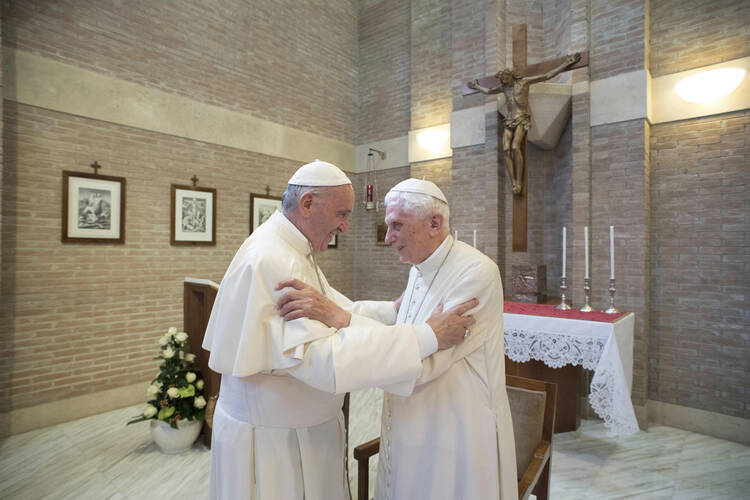 In 2009, when Pope Benedict XVI issued his encyclical “Caritas in Veritate,” I was in the period of Jesuit formation known as regency, teaching philosophy at Loyola University Maryland. There was a faculty reading group focused on Catholic thought, and it seemed appropriate to read the encyclical together.

I still remember how surprised we were by it. “Caritas in Veritate” was Benedict’s contribution to the development of Catholic social teaching, with a particular emphasis on thinking through the implications of “integral human development” in a globalized economy. And with his characteristic clarity and focus, Benedict worked through what a commitment to human dignity and human flourishing means in a world increasingly shaped by the powers of international finance and flows of trade among vastly unequal nations. Among his conclusions: There is a need for the reform of the United Nations and economic institutions, “so that the concept of the family of nations can acquire real teeth.” Referring to John XXIII’s “Pacem in Terris,” Benedict also said “there is urgent need of a true world political authority,” as part of “the construction of a social order that at last conforms to the moral order.”

We were surprised mostly because we lived in the United States and the idea of taking the United Nations so seriously and investing real hope in it seemed at best utopian, if not outright laughable.

What unites Benedict and Francis is their common fidelity to God calling us to conversion.

Or, as we realized while talking through the encyclical, the honest version of our reaction was that what Benedict was describing as “inspired by the values of charity in truth” was so far from our comfort with the status quo that it took real effort—in the sense of a religious submission of intellect and will to magisterial teaching—to recognize it as an authentic expression of Catholic social thought that we were not yet fully ready to accept.

Following Pope Emeritus Benedict XVI’s death, many appraisals of his legacy have been offered. They have generally been positive about his contributions as an individual theologian and his pontifical encyclicals, but more mixed and critical about his 24 years in charge of the Congregation for the Doctrine of the Faith under St. John Paul II and his governance of the Vatican Curia as pope.

Benedict’s approach at the C.D.F., where he investigated and silenced a number of theologians whom he saw as straying outside the bounds of orthodox Catholic teaching, and his inability to bring the curial bureaucracy to heel have both been contrasted with Pope Francis’ approach, which is far more tolerant of theological exploration and also more willing to wield papal authority to restructure the Curia and sideline those who obstruct his reforms. While these analyses are reasonable, they can tend to be reduced (depending on the commentator) to “Benedict bad, Francis good” or “Benedict good, Francis bad.”

One of the most significant gifts of Benedict’s teaching and example is the freedom to hear how the Catholic tradition calls us to conversion—to hope for change not just in the church, but also in ourselves.

In addition to being desolating and tinged with despair, treating the life of the church as a zero-sum game about who is in power, these takes on the contrast between Benedict and Francis also wind up being boring. They flatten the Petrine ministry into a question about agendas and programs, as if popes come into office with a plan or platform and the question of their success is about how much of it they manage to implement.

In 2013, after Benedict’s stunning resignation—an act of fidelity, courage and change that no one predicted—and Francis’ election, when I was in my theology studies, I wrote a piece for The Jesuit Post’s series on the new pope. It was headlined “What Pope Francis Wants to Change,” and I answered that rhetorical question in the first paragraph: “What does this pope want to change? Us. That’s his plan, his agenda for the church.”

I could have said then, and I will say now, the same about Benedict XVI. What unites Benedict and Francis is their common fidelity to God calling us to conversion. They did not always imagine the path of conversion the same way—Benedict often accented discipline where Francis stresses discernment, or evoked the beauty of the liturgy where Francis calls for an openness to encounter—but they both hope for conversion as a response to grace in relationship with God rather than just a recognition of abstract truth. This shared hope explains their steadfast support for each other during the 10 years of having a pope and pope emeritus both wearing white.

Shared fidelity, of course, does not eliminate the possibility of disagreement. I can well imagine that Benedict may have been saddened by or skeptical of some of Francis’ decisions. But I think Benedict would have recognized such a response as calling for further conversion on his own part and not solely for critique of the decisions of his successor. One of the most significant gifts of his teaching and example is the freedom to hear how the Catholic tradition calls us to conversion—to hope for change not just in the church, but also in ourselves.